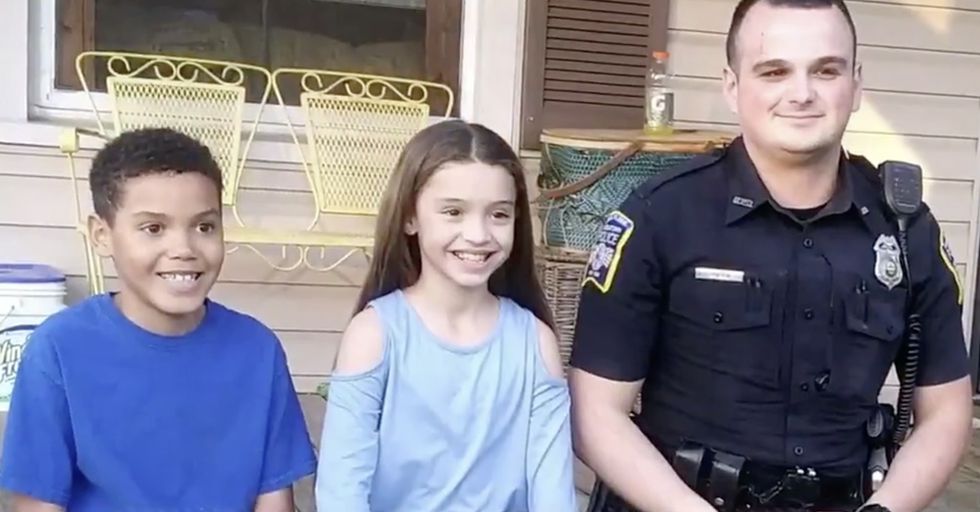 It's every parent's worst nightmare. You think your kids are safe, and then...they're not.

One great-grandmother in Ohio recently lived this nightmare. Thankfully, everyone is okay--but it was a very near thing! And thanks in large part go to a brave 8-year-old who kept himself and his big sister safe during a harrowing ordeal. Not everyone can keep calm when suddenly thrust into a terrifying situation. Yet when it happened to him, this boy somehow knew exactly what to do.

Now, you can read the family's retelling of events that day. Plus, you can even see the daring rescue for yourself! Keep reading for the whole gripping story. You won't believe how resourceful this little boy was!

Nita Coburn thought nothing was amiss.

She had brought her sick daughter to the Atrium Medical Center in Middletown, Ohio, and Coburn's two great-grandkids were with her.

Coburn got out of the car.

She didn't go far; she was only helping her daughter into a wheelchair outside the medical center's emergency room.

And she thought she'd locked the car.

But unknown to Coburn, a safety feature of the car prevented it from being locked with the keys still inside.

So it was left open.

If she'd known, Coburn never would have left the kids alone in the backseat of the car.

She was helping her daughter outside.

And when a stranger climbed into the car and began to rush away from the hospital with the kids still inside, the horrific reality of the situation became clear.

"I started hearing the kids screaming and I ran to them," she told WCPO. "All I could see was my great-grandbabies in the back seat..."

But her great-grandson has a fast reaction time.

Chance Blue, 8, was caught in the car with his big sister Skyler Weaver, 10. And his quick thinking saved them both.

“Every time I think about it, I want to cry," she said. “It’s the most morbid feeling in the world."

Surveillance footage shows pretty much everything.

The man, who has been identified by police as 24-year-old Dalvir Singh, was caught on camera driving away from the ER entrance with Coburn running after the car.

Coburn reacted, but not quickly enough.

She ran, actually managing to catch up to the car and grab the driver's side door--but the man who'd jumped in just slammed the door shut again.

But she wasn't giving up.

Coburn kept up with the car, later telling WCPO that she didn't care about anything inside except her great-grandchildren.

She tried to pull open the driver's door again.

And then she saw something else terrifying. “The second time he slammed it shut, I saw he had a hold of Skyler," she said.

Everything happened so fast.

Seeing that, Coburn screamed and grabbed at the door handle again, but the would-be kidnapper began to drag her along the pavement nearing a curve.

On the other side of the car, something else was happening.

Chance quickly got the backseat door next to him open, but the hijacker started trying to push him out--while holding onto Skyler.

Here's Chance and Skyler's own words:

"I got over my sister, and I was trying to get her out," Chance told ABC News. "My brother went to go grab me, opened the door and went out. My brother fell out but the guy pulled me into the car," Skyler added.

"He was saying, 'Get out, get out," Chance said. And as Chance tried to 'get out' with his sister, Singh grabbed Skyler by her hoodie.

But Chance didn't let that stop him.

He pulled his sister out of Singh's grip and with him as the two of them tumbled out of the car to safety on the pavement.

All in a day's work for a loving sibling.

“I was acting in the moment because I didn’t want my sister to get hurt," Chance later said. Even so, that's one heck of a save!

Everyone was praising Chance's lightning-fast instincts.

“What Chance did was extremely heroic," Middletown police Officer Connor Kirby told WCPO. “It shows how extremely brave he was and how much he loves his sister."

She kept hanging onto the car door, and police estimate that Singh dragged her about four car-lengths before she let go.

After that, Coburn saw her great-grandkids running to her.

“That car didn’t bother me at all," Coburn said. “It was them two babies. No one needs to feel that fear. No one does."

Police then stepped in.

And they were able to apprehend and arrest the car-jacker just several blocks away!

He was brought in immediately.

Singh was booked into Middletown County Jail on charges of kidnapping, grand theft, and felonious assault.

So there's some justice here, too.

Singh is currently being held on bond and is expected to appear in court this week.

But basically, Chance did a whole lot here.

I can't imagine the terror they felt in that moment, but Chance's actions may well have saved his sister's life.

“This little guy is a hero," Police Chief Rodney Muterspaw said. “No question. He pulled his sister out of the car with no concern for his own safety. That is incredible at his age."

It really is incredible!

There are adults who don't have as much bravery at hand as that 8-year-old!

And everyone knows it.

According to Good Morning America, Chance is going to be officially recognized for what he did that day!

It was all over in a few seconds, but that was all Chance needed to keep himself and his big sister safe!

And that's how you little brother, everyone.

Here's hoping that both Chance and Skyler are doing well after that scare. I think we all feel better knowing they've got each other's backs! Share this amazing story with anybody else who needs a happy ending today!