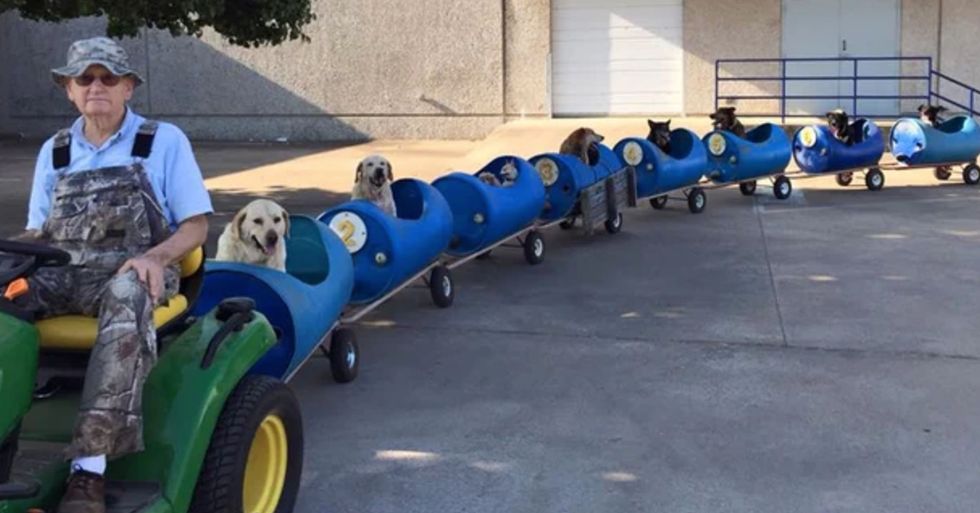 Amidst all the doom and gloom - especially with the coronavirus pandemic - it's nice to read some good news for a change.

Well, this week our prayers have been answered - and it comes in the form of some truly heart-melting dog-related news.

An eighty-year-old man has built a dog train for stray dogs and it's the most wholesome thing we've ever seen. Keep scrolling to watch the adorable clip...

Well, that's exactly what eighty-year-old Eugene Bostick, from Fort Worth, Texas is doing.

Eugene has made it his mission to help out as many rescued stray dogs as possible.

Although, he's taken a more unconventional route, shall we say...

Why? Because he spends his time operating his homemade train that takes rescued stray dogs out for rides around the neighborhood.

Eugene and his brother, Corky, live on a street where people tend to bring their unwanted dogs to abandon them.

So, after noticing the problem, Eugene set up a makeshift shelter and began taking the pooches for rides in his tractor.

“We started feeding these abandoned animals, letting them in, taking them to the vet to get them spayed and neutered. We made a place for dog rescues to live," Eugene revealed to The Dodo. "I seen this guy with a tractor who attached these carts to pull rocks. I thought, ‘Dang, that would do for a dog train.’ I’m a pretty good welder, so I took these plastic barrels with holes cut in them, and put wheels under them and tied them together."

“I started out with my tractor… I’d put 4-5 dogs in there and take them riding."

"All of a sudden, a couple more dogs showed up. I said, ‘Oh, that’s not enough room’ – and that’s when I came up with that," he continued.

The eighty-year-old takes the dogs out for a train ride twice a week.

And these precious pooches love it. “Whenever these adorable dogs hear me hooking the tractor up to it, man, they get so excited."

Watch the heartwarming clip below:

This is the best thing we've ever seen. Want to read more like this? Keep scrolling to watch the hilarious moment one clever canine reports himself missing...