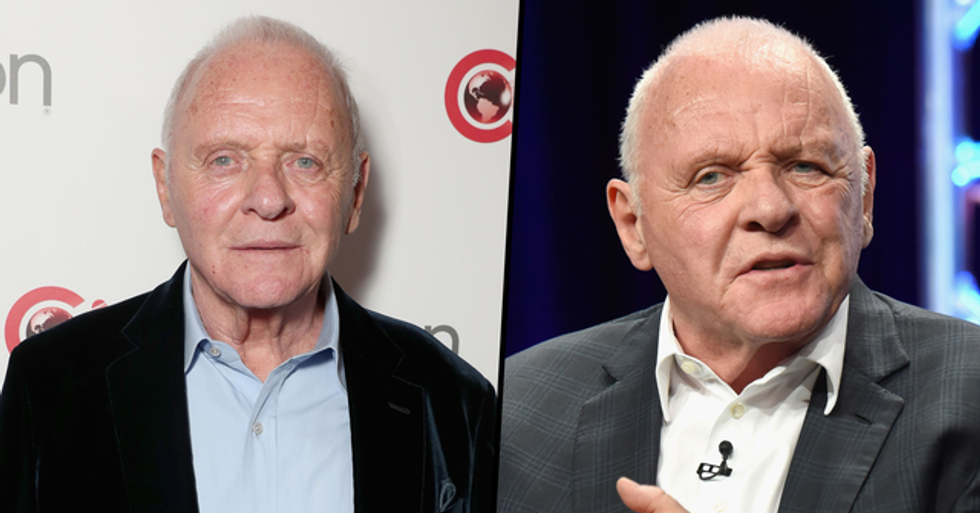 And it turns out that he is somewhat at peace with it.

The legendary actor, who is set to turn eighty-three this December, gave a candid interview about his thoughts surrounding the notion of death ahead of the release of his new movie, The Father.

Hopkins had some strong words about his "inevitable death"...

And even explained why he feels almost "peaceful" about it.

Now, this may not come as a shock to most of us, because Hopkins has lived one hell of a life.

After serving in the British Army for 2 years, the Welsh-born Hopkins began his theater training at the Royal Academy of Dramatic Art in 1959. And today, he stands as one of the most legendary actors of our time.

After training and working for several years...

Hopkins made his small screen debut in 1967 with a BBC production of A Flea in Her Ear.

From there, it was onwards and upwards.

Throughout the 1970s, the casting calls continued to flood in, and Hopkins continued to work in both films and on stage, garnering critical attention for this double duty.

However, his career didn't truly heat up until 1976.

That year, Hopkins won an Emmy for his role as Bruno Richard Hauptmann in The Lindbergh Kidnapping Case. And, throughout the 1980s, Hopkins continued to impress the critics with his work in film and TV, winning multiple Emmy Awards and a BAFTA Award.

But, of course, there's one role that stands out amongst the rest.

In 1991, Hopkins portrayed the role of Hannibal Lector in Silence of The Lambs, both wowing and terrifying critics and audiences alike.

It was Hopkins as we'd never seen him before.

His seventeen-minute performance as the cannibalistic psychopath was simply sublime, and the role not only gained him an Oscar, but it cemented him as one of the most memorable on-screen villains of all time.

Since this momentous role, Hopkins went on to star in a number of blockbusters...

Such as The Remains of the Day, Nixon, and Amistad.

And, in 1993, Hopkins was officially knighted by the British Empire...

He was presented with the prestigious title by Queen Elizabeth II for "services to the arts" at Buckingham Palace.

As Hopkins entered his twilight years, his career did quite opposite of slow down - throughout the last 2 decades, the icon has appeared in a variety of successful blockbusters, such as Hitchcock, Transformers: The Last Knight, and Westworld.

And he has another movie coming out, The Father, which details the life of an elderly Welshman who is gradually losing his memory.

The movie tackles a lot of the issues surrounding old age and Alzheimer's disease...

And, of course, the fragility of life itself.

His performance has been hailed one of the greatest of his career...

And has been adorned with praise from critics across the board.

So, of course, it was only natural for Hopkins to reflect on his own reality with old age himself.

The actor, who is set to turn eighty-three this December, spoke with the Mirror about his awareness of his impending death.

And, remarkably, he admitted to feeling "peaceful" about it.

In an extraordinary interview to mark sixty years on screen, Hopkins gave his morbid, yet somewhat endearing opinion on the end of life.

"Your life is terminal. It’s a terminal condition, you’re not going to get off the planet alive."

Hopkins then recalled the experience of his own mother dying, adding:

"I remember when my mother was dying, she'd just had enough. She was eighty-nine and wanted to go. It's a sad subject still, but that's the inevitable."

So, of course, he has come to terms with the fact his own time will be up very soon.

The actor admitted to feeling a “wonderful peacefulness" about the approach of death, adding that “there’s a tremendous freedom because there is nothing I can do about it."

The Father is set for release in the United States on December 18th.

For more on the legendary faces of Hollywood, keep scrolling to read about Vogue's oldest Covergirl...