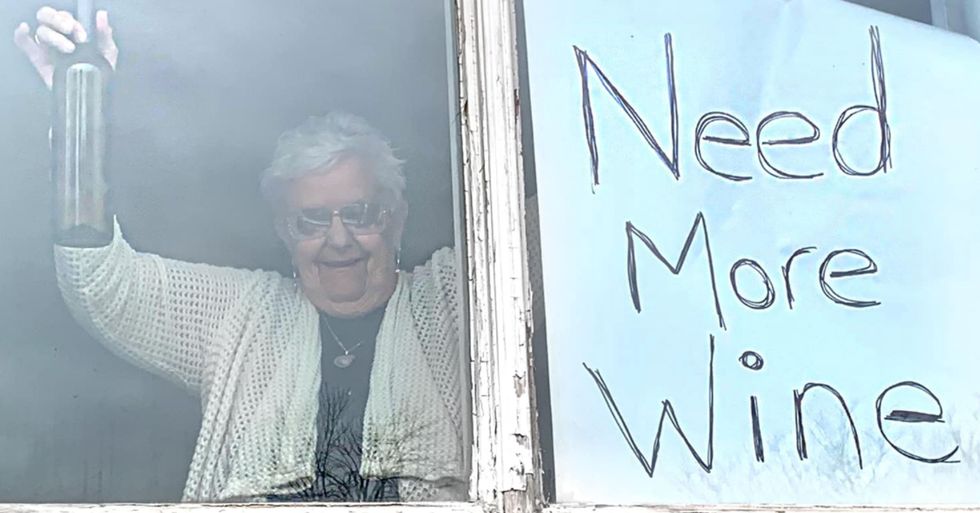 Quarantine is proving rather difficult for us all, but one eighty-two-year-old lady has really been struggling... without her wine.

Keep scrolling to check if her fantastic sign delivered on serving up the much-coveted wine...

Since the first case in Washington, there have been over 400,000 more confirmed cases across the country.

But the biggest thing that people seem to be longing for...

Is a refreshing glass of wine.

Of course, we can always pick up a bottle or 2 from the local liquor store...

But for those who are having to self-isolate completely, such as the elderly or the vulnerable, getting their hands on these essentials is almost impossible.

One elderly lady decided to let the world know about her needs...

This is Kelly Muller, and her eighty-two-year-old mom has been self-isolating as a precaution.

Kelly uploaded this incredible picture of her mom recently...

She captioned it, "Went to my eighty-two-year-old Mothers House today to check on her and to see if she needed anything. She was anxiously waiting for me at the window."

People left comments such as, "Aww bless her! Stay inside, wine is coming!" and many felt they could strongly relate to the wine-hungry lady.

Thankfully, this story has a happy ending.

Kelly went out and got her mom a beautiful bottle of wine. Perfect!