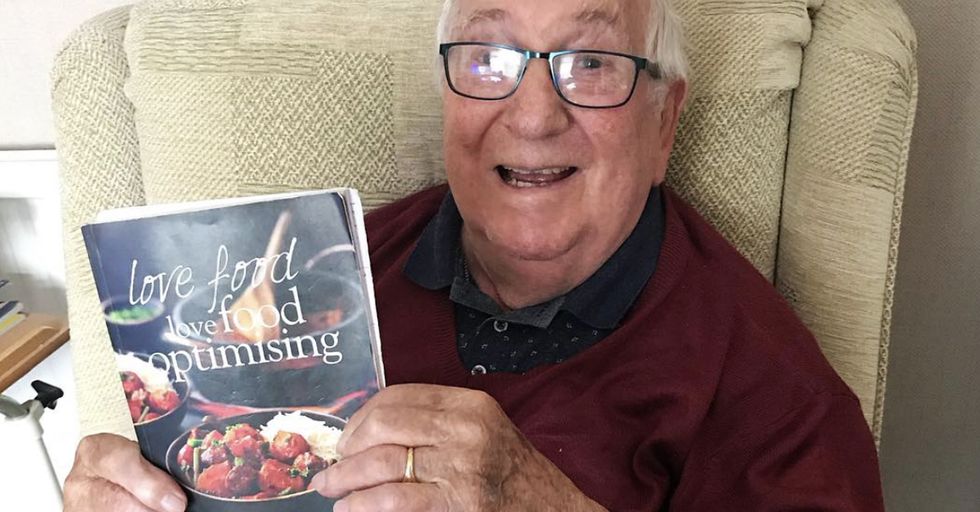 Have you been on Instagram lately? I don't know about you, but my feed is practically filled to the brim with beautiful people claiming to live luxurious lives. They are traveling all over the world drinking green smoothies and handing out coupon codes for the athleisure clothing brands who have chosen to sponsor them. It is kind of infuriating. No one's actual life is that perfectly curated.

Luckily, there are some people on social media who are genuine and honest in their portrayal of their lives. They are simply trying to share their personal journeys with others to keep themselves accountable and to maybe inspire others to jumpstart their own paths to self-betterment. One of these amazing people is David Cyril, an 86-year-old grandfather and jolly human being from the UK who started documenting his weight-loss journey on Instagram a few months ago. Something about David's account has touched the hearts of so many, and now he's the best Instagram celebrity out there.

In September 2018, David Cyril introduced himself to the Insta-world.

He explains that he's been on the Slimming World program (a UK weight-loss program similar to Weight Watchers) for a few years but had gone back up to his starting weight after losing a bit.

He wrote, "I think starting this account will give me the encouragement I need to reach my target." David had no idea how right he was!

David is an 86-year-old grandfather, and his account is full of adorableness.

Here, he is at his grandchildren's school for Grandparent Afternoon enjoying a macaron! He is so cute, I can't take it.

David share's details of his journey and transformation pictures to show himself and others just how far he has come. The progress is astounding!

He also shares himself participating in this very full life. Here he's getting a haircut before his weigh-in (hey, every follicle counts!).

On October 2, David took a break from sharing pics of his weight-loss journey to wish his wife Barbara a happy anniversary. Thirty-four years together, and they are still going strong!

His face is just so full of joy and happiness! I love it.

Each weigh-in, David shares how much he lost or gained. He does it without judging himself or beating himself up. It's a real inspiration!

As his account gained popularity, people started sharing their tips with David, and he makes sure to try them out. Here he is taking a stab at overnight oats.

Even at 86 years old, David is an active member of his church choir! He's been part of it for 28 years.

David is great about sharing his meals almost every day. They're not all glamorous, but they all help him accomplish his goal of being happy and healthy!

I don't know about you, but I am really impressed with David's Instagram skills. I don't know if I could construct this photo!

Um, this is the cutest photo ever. This is David with his daughter Philippa and her fiancée Emma. He's excited to walk his daughter down the aisle when they get married in a year.

David is great about sharing his food discoveries with his followers. "Only just discovered these sausages last week," he wrote. "Barbara and I absolutely love them...McCartney's Red Onion and Rosemary sausages with eggs, mushrooms, & beans for tea!"

Um, are they not the cutest couple you have ever seen? This is them at the zoo with their children and grandchildren.

In less than a month, David gained over 3,000 followers on Instagram. He had no idea just how explosive his fame would be going forward.

These are the cutest little boys! I hope that at 86, I'm still able to be out and about like David.

Even when he gains weight, David is a beacon of positivity. He wrote, "Unfortunately it was a weight gain this week of 1.5lbs but I'm still smiling as tomorrow's a new day!"

David bounced back quickly with a huge loss for the week! Honestly, he is my hero.

Come on. He's so cute. This is what Instagram needs more of.

This picture makes me feel all warm and fuzzy inside. What an adorable human being.

Not even a month later, in early November, David's following ballooned to over 10,000 people. Clearly, his positivity resonated with people.

David has a great online following, but he has a huge network of supporters in his real life too. And that's what is really important.

At this point, the media was catching on to David's shooting star. Here he is being covered in the local newspaper!

David always looks like he knows something we don't know, and it's that life is better when you're smiling.

Um, does he have his own cooking show now? Because I would watch this in a heartbeat.

David made his TV debut on The Today Show two months after starting this account. He's a star!

But I doubt that David will stop being humble anytime soon. He's still chugging along working toward his goal!

Here he is on his 86th birthday! What an inspiration to all.

Look at this man! He's now got more than 100,000 Instagram followers and he's well on his way, and he's just the best! Share this with someone who needs a little inspiration!