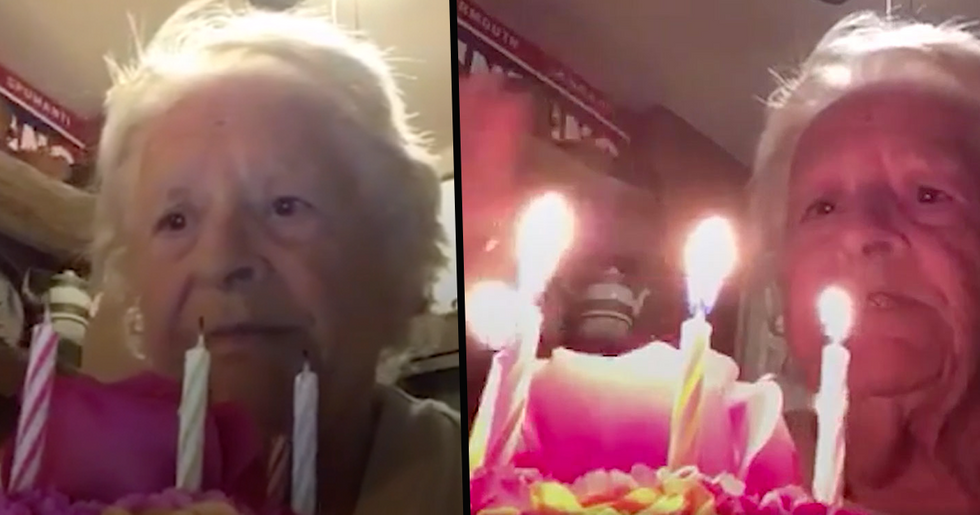 Many people are being forced to self-isolate alone right now. But one grandma hasn't let being alone damp her spirits, even on her birthday.

Keep scrolling for the heartwarming clip...

Since the first case in Washington, there have been over 600,000 more confirmed cases across the country.

Some people are forced to self-isolate alone...

Including many of the elderly.

Although, one determined grandma did not let the virus stand in the way of celebrating her birthday.

Norma Gregorio turned eighty-eight on March 25, but sadly, she had to spend her birthday alone due to the pandemic.

Of course, her family tried their best to still make the day special.

... despite not being able to visit Norma.

Norma's granddaughter Jessica Kerrigan, decided to have a cake delivered to commemorate her grandma's special day...

“Since we could not physically celebrate her birthday or bring her a cake because of the virus, I decided to order her a cake made out of flowers online, she loves flowers," Jessica told People.

Our mouth is drooling just looking at that cake!

But, Norma's family didn't expect this...

Looks like the family got a gift of their own in return.

Norma recorded the sweetest video of herself singing "happy birthday" while blowing out her candles...

And, despite being on her own, she looked to be having a great time. Keep scrolling to watch...

She then sent the clip to her family...

And her granddaughter made the decision to upload it to TikTok. “When she got the flower cake, she decided to record herself and send it to us," Jessica explained. “I thought it was so cute so I uploaded it to my TikTok not thinking it would anything of it. Next thing I know, millions of people are watching, commenting and sharing it."

“I told my grandma that I was getting messages from all over the world wishing her a happy birthday, and she didn’t believe me, she thought I was kidding."

Watch the heartwarming clip below: