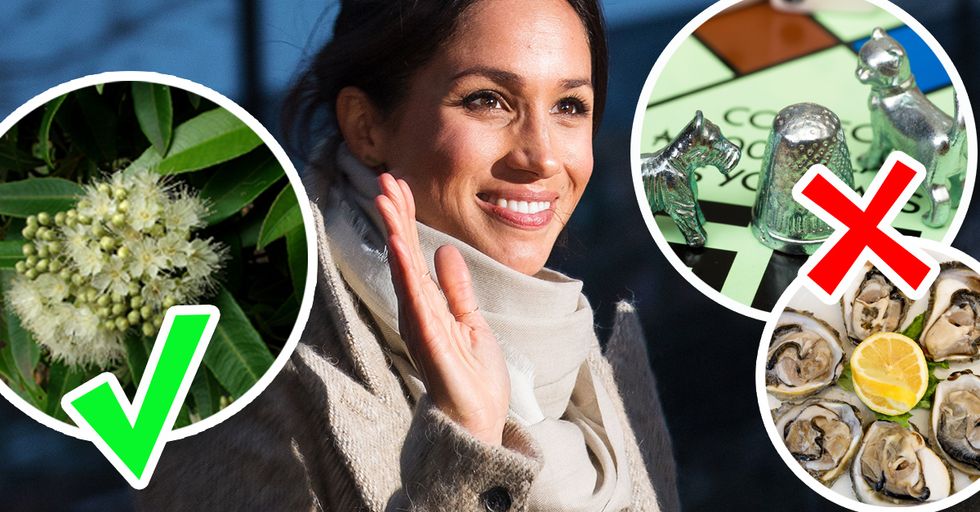 Ever since Prince Harry and Meghan Markle announced their engagement last year, the Internet has become sort of low-key obsessed. There's nothing like a royal wedding to get people excited!

But it's not all fun and games. Markle is about to undergo one of the biggest changes in her life, and with that transformation comes a lot of rules. And some of them are actually super weird.

There's more to marrying into royalty than simply wearing the fancy dress and living the rest of your life in the public eye.

As it turns out, there are a number of pretty strict rules and long-standing traditions that Meghan Markle will be expected to adhere to as she joins the royal family. Here are some of the things she'll no longer be able to do when she's the Duchess of Sussex.

1. Carry a wedding bouquet without myrtle in it.

OK, so this one actually applies to the wedding day itself, but it still totally counts. Every royal bride since Queen Victoria has carried myrtle in her bouquet (including Kate Middleton, pictured above), and Markle will likely be following suit. In fact, there's a good chance that the myrtle will come from Queen Victoria's very own 175-year-old garden.

Shortly after their engagement was announced, Prince Harry and Meghan Markle went out among the people to receive their congratulations. One fan asked to take a selfie, to which Markle replied, "We're not allowed to take selfies." I know what you're thinking. If she can't take selfies,  how is Markle going to show off her awesome "I Voted" sticker on Instagram? Well, that may not be a problem...

...Because she also can't vote. Britain's royal family is expected to remain neutral on all political matters. Although voting is not prohibited by law, it's considered unconstitutional for the royal family to cast votes. In other words, it simply isn't done.

If you're a fan of Suits, I hope you already got an autograph, 'cause you're not getting one after the royal wedding. Apparently, the "no autographs" rule is a safety precaution to keep people from forging the royal family's signature. The next safety precaution may be taking things a bit too far, though. Especially if Markle is a huge foodie...

Yep! The royal family, as a rule, avoids eating shellfish. This is because of the increased risk of transmitting food-borne illnesses. I'm imagining that Meghan Markle is planning her entire wedding in between servings of shrimp scampi. That's what I would do.

6. Get a flashy manicure.

Say goodbye to fun colors and glitter! Royal family members are advised to only paint their nails in neutral colors as part of their pretty strict dress code. And speaking of dress code...

Markle will also have to bid adieu to the wedges in her closet. Which, if you ask me, is no great loss. Wedges are easily the least comfortable form of footwear in existence. Apparently, the Queen agrees with me, as she's not a fan of wedges. It's well-known within the royal family that you only wear wedges if you want to get some major side-eye from Her Majesty.

Crossing legs is also frowned upon. What is allowed is something called the "Duchess slant," which involves placing your legs together and holding them at a very slight angle. Sounds kind of uncomfortable, no? And finally, here's the most bizarre thing Meghan Markle will no longer be allowed to do after the wedding:

According to The Telegraph, Prince Andrew revealed that the royal family is not allowed to play the real-estate board game. Why? According to him, "It gets too vicious." As much as this rule makes sense, wouldn't you just love to see the Queen as the banker? Alas, it is not meant to be.