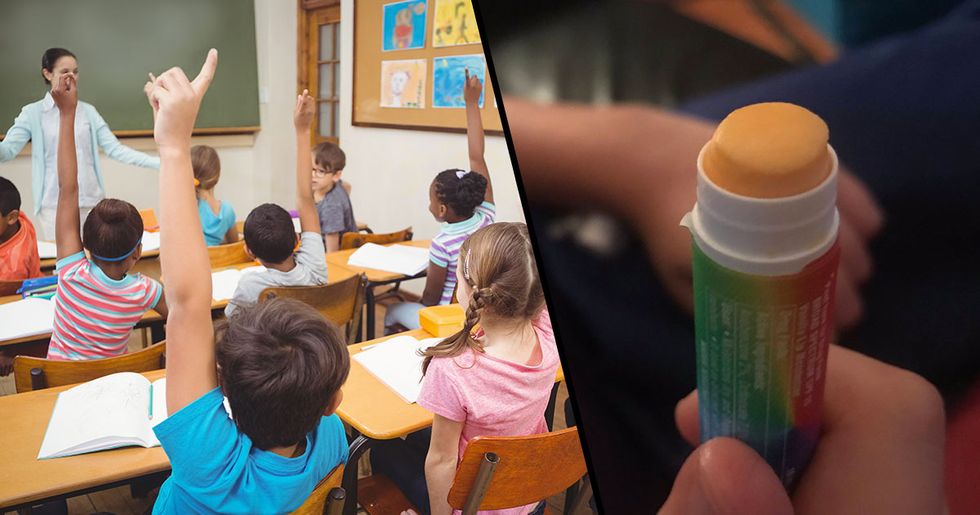 Kids nowadays are getting smart.

Long gone are the days of throwing paper airplanes and sneakily sticking gum under desks, because 4th graders are apparently getting very savvy with their classroom antics.

One mom recently went viral after she shared a photo of what her 9-year-old daughter had taken into class - An empty lip balm tube stuffed with cheese. Yes, this legendary girl had gone through to the effort of creating the lip balm replica so that she could sit and snack on cheese in class without her teacher noticing. Sheer genius, if you ask me.

Keep scrolling to see the handmade contraption, which I will definitely look into sculpting for my next meeting...

School can be one hungry place.

We all remember it. Sitting in class, stomach rumbling, watching the minutes to lunchtime slowly tick by.

However, one savvy kid has defied the system...

Because rather than sitting and waiting miserably for lunchtime to arrive, this 4th grader, from Missouri, has taken matters into her own hands.

By sneaking in a snack in the most amazing way...

Instead of slyly nibbling on a chocolate bar under her desk, or subtly eating candy from her pocket, this girl molded a block of cheese into a lip balm tube. Round of applause, anyone?

This video is a compilation of back-to-school pranks on sneaking food into class from Troom Troom, a DIY life hacks channel. In the video, they use an empty glue stick container but the girl's household didn't have any of those laying around, so the young inventor picked the next best thing.

Here it is, in all its glory.

As you can see, the cheese has even been moulded to be an exact replica of a regular lip balm stick.

The inventor herself has remained very humble about the whole thing.

"I was just looking on YouTube because I was bored and I found this video and I decided to do it," the girl, whose mother asked that her name not be published, told Buzzfeed. "I just took some of my dad’s cheese, sliced it up, and put it in the chapstick container."

However, her mom decided to inform the teacher of the homemade contraption.

Her co-worker hilariously pointed out the obvious...

Though a cheese pageant mom is notably less creepy than a regular pageant mom.

Her grandma has high hopes.

But some people called out her mom for snitching to the teacher...

Because come on, Valerie. You're supposed to be on her side! But Valerie addressed all those calling her a cheese narc and insisted that she just wanted to tell her teacher the funny story to brighten up her day (and distract her from her unfair salary).

Luckily, the genius cheese connoisseur didn't get into trouble.

And her teacher was actually very amused by the whole thing.

People are marvelling at the little girl's sheer genius.

She is ridiculously ahead of her time.

And the whole thing brought with it some excellent pun opportunities...

Berts Bries. Perhaps even more genius than the invention itself...

And the little girl has now been recognized for her efforts...

And will even be featured in her school's next newsletter! Not bad for sneaking a tube of cheese into class, is it?

We're certain the cheese tube will become a thing...

But for now, here's a list of genius inventions that already exist, just to save you from sneaking cheese into your next meeting...