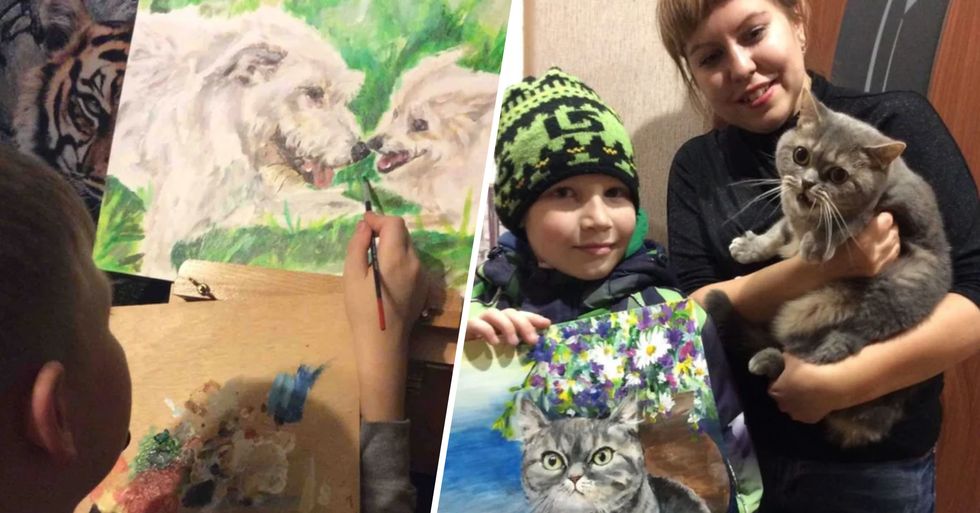 Animal shelters are often stretched to their limits, but thanks to the hard work of one very talented young boy, a local shelter has now been receiving some generous donations...

In many shelters, a lot of animals are kept together for long periods of time.

This is no life for an animal and each and every one deserves a loving and happy home.

It's no secret that many animal shelters are now stretched to their limits...

And with the high volume of animals coming into their care, the majority are now struggling to keep on top of resources and essentials, such as animal food and medicines.

But one young boy recently came up with a very clever idea to donate these supplies to animal shelters.

This is Pavel Abramov...

And he is a 9-year-old painter from Nizhny Novgorod in Russia.

As you can see from the previous picture...

Pavel is extremely talented at such a young age.

The young artist has a signature specialty...

He paints nothing but portraits of pets.

The young man is a huge animal lover...

But when his dog, Barsik, died last year, he decided to do something with his paintings that would really make a difference in the animal world.

But instead of asking for money, he asks for the pet owners to donate various items to the small city’s only animal shelter - including food, dog treats, medicine, and household supplies.

Pavel is now in very high-demand...

And pet owners in the city cannot get enough of his incredible work.

This brave social initiative has already spread beyond Arzamas city...

Animal lovers from all over Russia and even abroad now want to have the portraits of their pets made while taking part in a charitable mission.

Pavel is the youngest volunteer of the only animal shelter in Arzamas that currently houses over 100 dogs...

And his tireless work has already made such a difference.

Pavel's family are, of course, so proud of their son's selfless work.

"Our family is proud of his wonderful project. His days are scheduled to minutes, he wants to do absolutely everything, there is just not enough time," the boy’s mother Ekaterina said. "Pavel dreams of becoming an architect and building a big shelter in the future, and for now – he will contribute as much as he can with his art and humane initiatives."

Keep up the good work, Pavel!

Make sure to keep scrolling to learn about the pizzeria who puts shelter dogs on pizza boxes to help them get adopted...