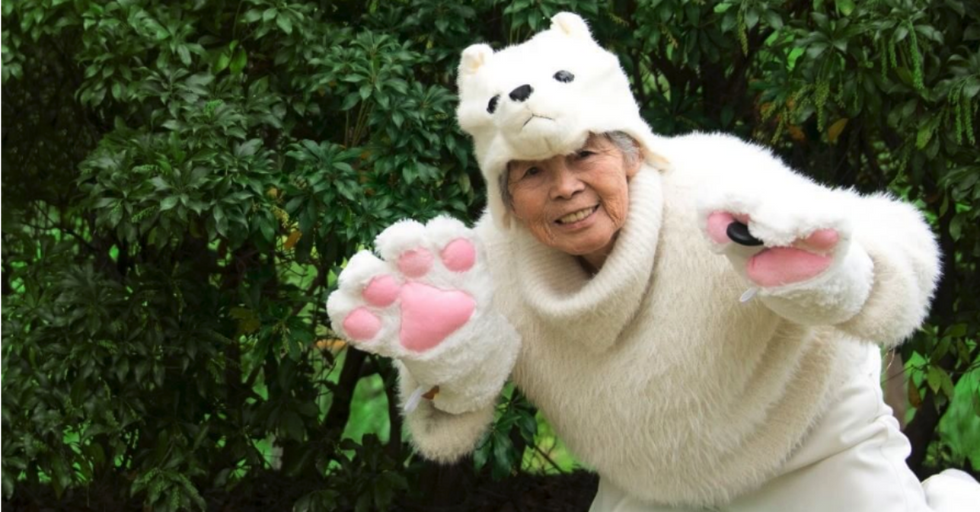 Sometimes it takes a joyful presence to remind you how silly and lovely life can be.

This joyful presence happens to be a 90-year-old Japanese grandma who loves taking ridiculous pictures of herself.

This is Kimiko Nishimoto.

She has pretty much exploded the Internet with her hilarious self-portrait photos, in which she's a witch or a frog or getting run over by a car.

She's not afraid of looking silly or wearing funny costumes. And that's what makes her a true hero.

Could you photoshop something like this? Because I definitely could not.

Ah yes, the traditional "90-year-old woman falling off a mountain bike" self-portrait. The next one truly brings out her spirit.

Raise your hand if you've ever put things up your nose for fun. No? Just me and Kimiko? OK then.

Bunny on a broom

Look at how much fun she's having! This woman should be in charge of everyone having fun always.

She went full witch in this spooky picture! No joke, I am super impressed by the effect that looks like she's moving through the air and I want to know how she does it.

Crack in the wall

Does she do weddings? Because I'd like to hire her as my wedding photographer.

What a beautiful soul! Her sense of humor and the light she brings to others is so admirable. The next one will really get you going.

Usain Bolt got nothing on Kimiko when she's blazing down the sidewalk in her motorized scooter.

Have you ever seen a sillier, sadder rabbit? I love this pic so much I just might make it the background of my phone.

How does she do this?! My theory is that she's so full of light and laughter that she can actually float.

There she is again, this time after clearly stealing a bunch of fresh vegetables from the supermarket.

This one is full of pain and drama. Who knew she had such depth? The next one returns to the land of the silly.

She looks so relaxed for someone who's currently getting her legs crushed by a speeding car.

Does it get any cuter than this?! The answer is no.

That's clearly a world-class athlete right there. Honestly, though, she can probably run faster than I can.

Is that a bear costume?! I think it's a polar bear. Well, whatever it is, it's adorable.

Mid-crash pics are always the best. The next one is just super sweet.

Kimiko's caption for this photo is simply, "I like oranges." We can see that!

Do you think it's supposed to look like she's trying to hold up the building and not let it fall down? She's clearly very strong.

I love that she looks like a sweet, old lady but she has such a silly streak in her! And she's willing to make people laugh in public!

She's gotten so successful that she's even had shows of her artwork at galleries and stuff! She's achieving her dreams!

Yeah, she's achieving her dreams while looking like this. She's got it all figured out. The next one might take you a minute to figure out.

I wonder what this photo symbolizes. I think it represents how Kimiko really wants an apple, but she just can't seem to reach one.

This photo both asks and answers the question, "How many scarves can one woman wear while still looking super cool?"

There's a lot going on here. And I love all of it.

Oh no! Now she dragged a friend down with her into the street while cars zoom on by.

Of course this woman is in control of her household! Love this pic so much. Share this with someone who needs Kimiko in their life!