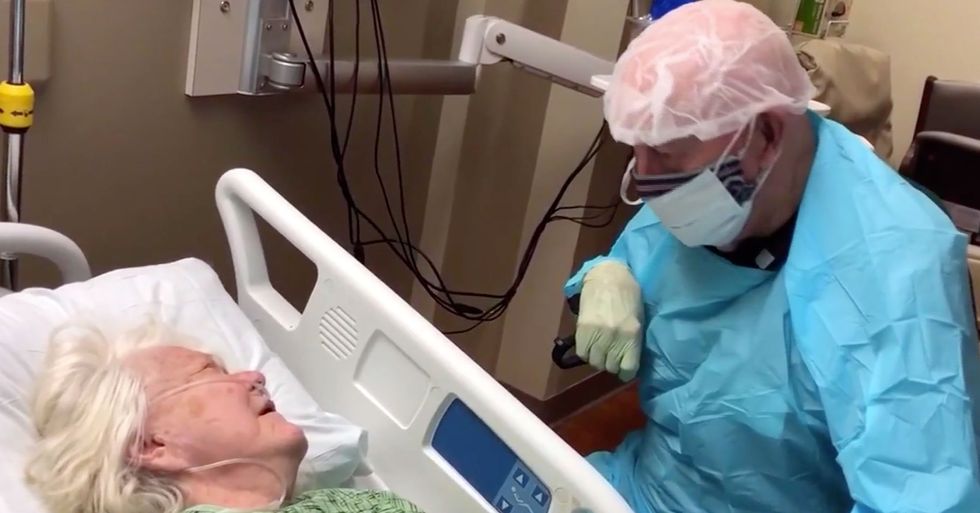 Shortly after he made headlines for visiting his wife of thirty years in the hospital, a 90-year-old man has sadly passed away.

Joanne and Sam Reck have been married for thirty years.

But the deadly coronavirus has kept them apart for the past 4 months.

Joanne was staying in a care home and due to new guidelines, her husband was not allowed to be in her presence.

Of course, that was very difficult for the couple.

And, thanks to Joanne’s dementia, she couldn't fully understand why Sam couldn't spend as much time with her.

via: Scott Hooper via TMX News

But they managed to make it work with the use of a stroller.

When Sam came to see her, she was wheeled out onto the balcony so even though the two couldn't physically be close to each other, they could at the very least see each other.

The meeting became known as the "Romeo and Juliet" moment.

The photographs really say it all.

However, their separation still caused a lot of turmoil.

via: Scott Hooper via TMX News

Holly explained: "Even though they were able to see each other from the balcony, it wasn’t the same. My father would go every day and spend eight hours or more with her... I think it really took an emotional toll on both of them."

But, last month, things took a turn for the worst.

Joanne was diagnosed with coronavirus.

However, Sam knew that seeing her would put him in severe danger...

He knew he had to see his wife in case the end was near.

The video, filmed by the couple's son, was extremely heartbreaking.

In the short clip, Sam could be seen covered in PPE; double masks on his face, an apron, and gloves as he sits by his wife's bedside.

And just to make things even more painful to watch, he says this:

“I’m finally getting to hold your hand after all these months," he said with tears while he squeezes Joanne’s hand in her hospital room.

They both tell each other they love each other as they know their moment is going to be ending soon.

The devastating video has just reiterated just how tragic this pandemic has been for us all, but especially couples who have had to live without each other due to the dangers.

The response to the clip was overwhelming...

@ABC7 I think there could be something positive coming out of this video and it’s to bring awareness to our communi… https://t.co/apR6MeCGbd
— Jennie Velasquez (@Jennie Velasquez)1595092576.0

And many people offered their support and condolences for their hardship.

But now, only 3 weeks after her death, the family has suffered even more heartwrenching news.

At the age of ninety, Sam has also died.

It turns out that the elderly gent had contracted the virus after visiting his wife for the final time, and he simply couldn't fight for any longer.

But, even after testing positive, Sam had no regrets.

“After Sam tested positive for COVID, I asked him if he regretted his visit to the hospital," Scott, JoAnn’s son from her first marriage, wrote in a Facebook post. “Without pause, he replied, ‘Not one second.’ He said no matter what happens, he was very happy he had the opportunity to say goodbye and hold her hand one more time."

And Holly recalled her final conversation with her dad.

“He told me he had lived a good life. He never expected to live to ninety, and the most important thing to him was that he had taken care of his family."

For more on the devastating realities of coronavirus, keep scrolling to read about the married couple who died within minutes of one another...