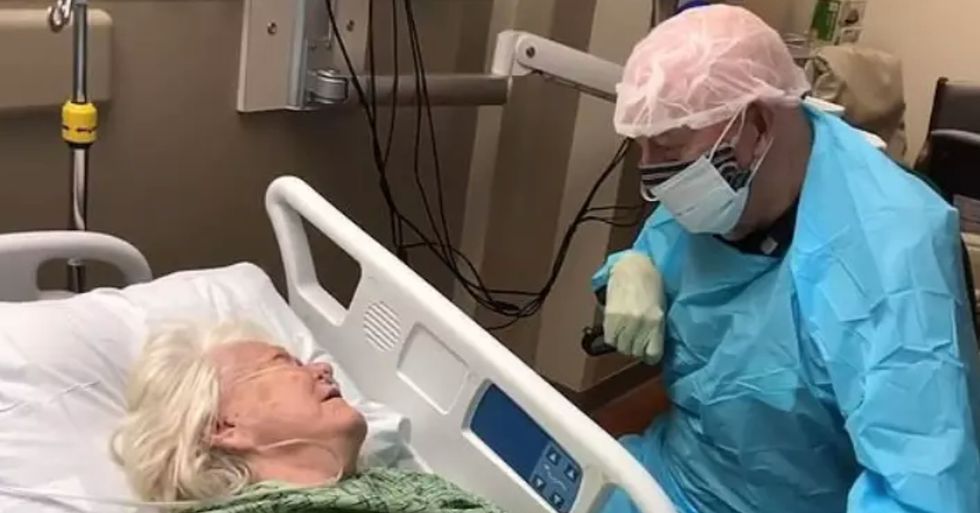 Amid the coronavirus pandemic, heartbreaking news has emerged of a dedicated husband, who has died just 3 weeks after his beloved wife.

His daughter recalled her final conversation with her dad, and it's utterly heartbreaking...

Heartwrenching news has emerged of a Flordia couple.

Their story has left the internet both touched and heartbroken.

In Florida , the most heartbreaking story has emerged.

A dedicated husband has passed away just 3 weeks after this wife.

His wife, JoAnn Reck, contracted coronavirus and had been taken to Florida’s Lakeland Regional Health Medical Center to be treated.

Here,  she received one final visit from her beloved husband, after he insisted he be allowed to see her to say goodbye.

Contracting the virus from his wife was a risk he was willing to take.

The couple had previously been hailed as the "Romeo and Juliet" of their nursing home, after being forced to have socially distant visits due to the pandemic.

Due to JoAnn’s dementia, she couldn't fully understand why Sam couldn't spend as much time with her.

"I think they had gone through so much emotional stress the prior three months because they couldn’t see each other, really, they couldn’t touch each other," Sam's daughter Holly explained.

"Even though they were able to see each other from the balcony, it wasn’t the same. My father would go every day and spend eight hours or more with her, and then COVID happened. I think it really took an emotional toll on both of them."

All Sam cared about was getting to say goodbye to his wife of thirty years in the flesh.

JoAnn's family decided to move her into palliative care, instead of putting her on a ventilator, where she passed away.

Just a 3 weeks after JoAnn passed away, Sam also died.

The family believes he picked up the virus from his wife.

But even after testing positive, Sam had no regrets. “After Sam tested positive for COVID, I asked him if he regretted his visit to the hospital," Scott, JoAnn's son from her first marriage, wrote in a Facebook post. “Without pause he replied, ‘Not one second.’ He said no matter what happens, he was very happy he had the opportunity to say goodbye and hold her hand one more time."

Sam's daughter, Holly, recalled her final conversation with her dad.

"He told me he had lived a good life. He never expected to live to ninety, and the most important thing to him was that he had taken care of his family."

"He let me know how much he loved all of us and I let him know how much I loved him and how much I appreciated everything he had done for me as a father through the years." Rest in peace, JoAnn and Sam.