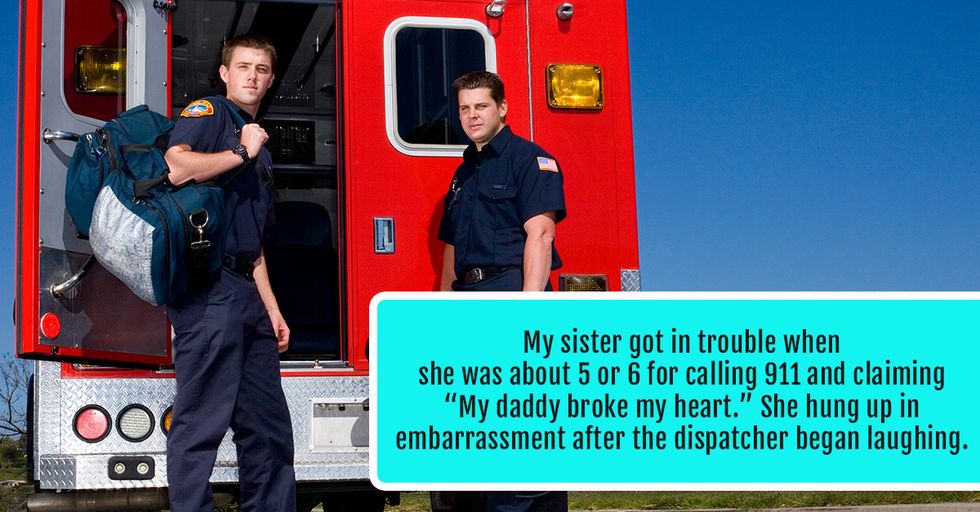 So you thought that you had to put up with idiots at work, did you?

Well, you probably do. We all do. But most of us don't have to deal with the level of stupidity that 911 dispatchers do on a daily basis.

So while I may have tried to open my car door with a pen today, I can still rest assured in the knowledge that I have yet to call 911 with an absurd, inappropriate, or literally insane issue. However, I should note that the day is not over yet.

These 911 dispatchers took to Reddit to share the dumbest calls they've ever received. And they reveal some seriously stupid, clinically insane, yet oddly satisfying stories.

Not only do they make the rest of us look that much smarter and saner, but they also show us the humanity that lies in between the violence and crime they constantly confront as 911 dispatchers.

They are stupid and they are crazy, but we kind of love them anyway. Is that so wrong? Oh well, we clearly have a lot to work on as a society, anyway.

But for now, let's just laugh at the utter idiocy of our species.

So without further ado, may we present to you the dumbest calls these 911 dispatchers have ever received.

The Police Department can file this lady's cool and collected call to 911 under "total psycho."

"I had a woman call 911 to ask if it was legal to sell a baby." -jesusisafish Yikes. Charles Manson's mom also tried to sell him once and we all know how that turned out.
We can only hope that this woman wasn't considering selling her own child! I mean, we don't hope that she that was trying to sell someone else's baby either... Ugh. There's really no possible comforting scenario here. Say, is it 5 o'clock somewhere?

This lady's late night tip to 911 was a false start, to say the least.

"3 am. Got a call about a suspicious vehicle outside of her house. I start getting the description and get my officers en route when she says "They're leaving!" I get the direction they are headed and relay it; I've got 4 officers converging like a net on this guy.

Apparently, the vehicle wasn't suspicious at all... but this lady sure is. We're wondering what in the world this woman was doing staring out her window at 3:00 a.m.? Actually, we really don't. We've got a pretty good idea what she was doing up so late.

This 911 dispatcher sure knows how to put out a fire.

"Some lady wanted the fire department to come burn her house down because she thought a demon lived in it. I sent paramedics and police to check on her but I told her we’d be happy to burn her house down in a controlled training capacity if she wanted to donate it, but there was a lot of paperwork to get that started."

This dispatcher has a lot to teach us. First of all, if you can't beat 'em, you might as well join 'em. And secondly, people's hatred of paperwork is so powerful, it can be used an effective deterrent for just about anything... even arson.

In the spirit of Thanksgiving, I think these "people" deserve a turkey pardon.

"Every Thanksgiving you’ll always get the person who calls because they don’t know how long to cook a turkey. Never fails."

Wait, sorry, just to be clear, this is not an acceptable query for the police? ... Of course, it isn't. I knew that.

On a completely separate note, does anyone know who a "person" can call for Turkey advice on Thanksgiving Day when everything is closed? I suppose one could just gobble it. Excuse me, google it. Why in the world did I never think of that all these years? I mean, why in the world didn't these completely anonymous and totally random "people" never think to just google it? But I guess since we definitely don't know any of these people, we will never know... phew.

To be fair, this caller has a seriously legit explanation for why he opted to call the Emergency Room for this specific advice...

"When I worked in an emergency room, a dude once called to ask how long to microwave a burrito.He said he was calling us because we'd know what temperature would burn him." -calliope720 If 911 doesn't answer, you can always call the hospital when you're not sure how long to microwave your burrito. Wait, what? No. That's not right. A turkey, yes. But a burrito? That's just insane. Yet burning your tongue on a boiling hot bean and cheese burrito does kind of feel like an emergency... for like 0.5 seconds.

"Apparently, my sister got in trouble when she was about 5 or 6 and called 911 claiming "My daddy broke my heart." She hung up in embarrassment after the dispatcher began laughing. " -jonatna (Key fact: Her dad was the one who answered the phone when the dispatcher called back... so it's not like he wasn't in the picture). He probably just said no to a seventh consecutive round of tea party. Bastard.

Well, this one is more than just a tad embarrassing.

"My daughter called 911 and told them my butthole fell out. I was pooping. POOPING. I caught her talking to them. I picked up the phone. They told me they had someone on the way. I died of embarrassment and told them I was ok, that it was just poop. They laughed, I cringed, my daughter patted my butt with a super concerned look on her face. The end." -panicoohno

This 911 caller was having a rough day and just needed to vent.

In response to this rundown woman's rough day, FulcrumTheBrave shared the dispatcher's concern.

"I hope she's doing well, too, but a part of me knows she probably isn't."

"Every year on July 4th and New Years we get calls about gunshots. Every single time the caller is perfectly convinced they're gunshots and couldn't possibly be fireworks. They'll say they hear automatic weapons or my personal favorite "rapid-fire shotguns". And every single time a deputy goes out to investigate, it turns out to be the unlikely culprit of fireworks." -NearlyFearless

This 911 caller is slightly paranoid and we seriously doubt it's from the melatonin.

"Had a woman call in stating she accidentally took too much melatonin. She started getting hysterical when she felt the effects of her overdose. She was getting sleepy." -NearlyFearless Sounds like this lady might also partake in herbs of other sorts 'cause she's seriously tripping herself out.

This 911 call turned out to be a horse of a different color.

"Me: 911 whats your emergency? Caller: there is a horse laying down in a field. me: do you believe it is injured? Caller: no it just normally stands up. me: yeah, we will have a deputy go look at it.

Another Reddit user responded with a little horse health advice but it kind of seems like maybe she's the one who's really in need of some advice.

Another Reddit commenter points out a potential plot twist in this 911 dispatcher's seemingly uneventful story.

"Too many to count. If I had to pick a favorite I’d have to choose the time a concerned citizen called in an animal stuck in a tree. That animal...was a bird." -emon3yy

These 911 callers seem to be experiencing some seriously clouded judgment.

"We get so many people calling to report stolen drugs or girls saying their client won't pay them...

Turns out this 911 caller's sudden dizzy spell was not all smoke and mirrors after all.

Caller calls for an ambulance, female patient, difficulty breathing. Ambulance arrives on scene and starts screaming for the fire department. Turns out the lady was having difficulty breathing from all the smoke in the burning house. Caller never thought to mention it."

Let's see here. Forgetting you're on fire? Okay, that's it. Pretty sure we're done here. I'm shuttin' it down. We've heard it all, folks.

And while there's no question that these 911 callers are either stupid or crazy, we're strangely glad that they're out there, giving us something to laugh at in between the surplus of serious stuff we're served up daily.

But yes, it's now official; humans are stupid.

Except for us, of course. Alright, I'm off to google some turkey deep-frying tips.