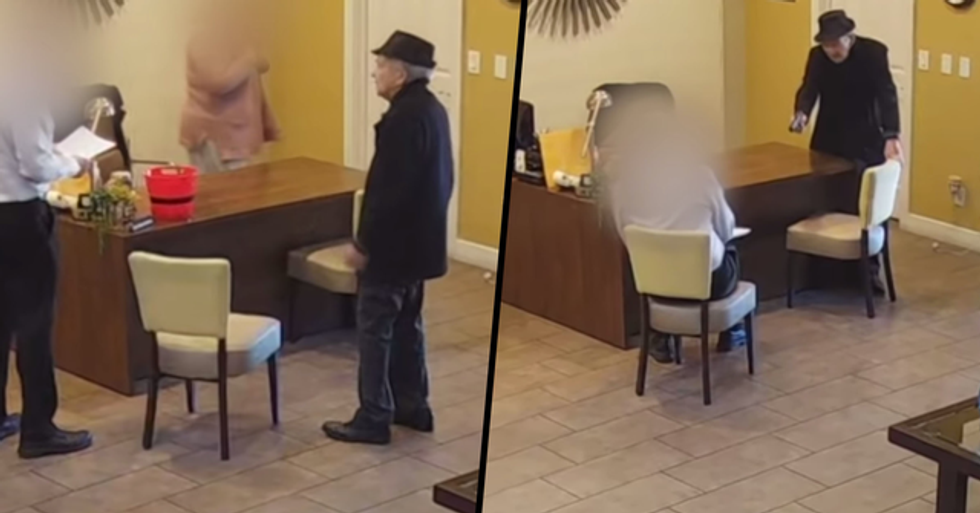 A shocking video has emerged this week of a ninety-three-year-old man shooting his apartment manager, at point-blank range.

The CCTV footage has horrified viewers all over the world, and have left many questioning the fate of the injured man. Keep scrolling for the full story, and to watch the harrowing incident for yourself...

We've all had landlord issues in the past.

But, last week, one man had seemingly had quite enough of his apartment manager... And went on to shoot him twice, at point-blank range, right there and then in his office.

It was all over a water damage dispute...

The elderly Las Vegas tenant had clearly grown tired of his apartment flooding and, after consistently blaming the management staff, decided to take matters into his own hands... Oh, and a Glock 9mm handgun.

After going to the manager's office to settle the dispute...

The tenant went on to shoot the manager twice, once in each leg.

Thankfully, the shots proved not to be fatal...

And the apartment manager was able to escape with non-life threatening injuries.

Shortly after the shots were fired, a staff member alerted the police...

And, moments later, police were on the scene, where they swiftly arrested the agitated tenant.

The man has now been identified as Robert Thomas...

Thomas, who is ninety-three-years-old and has no previous criminal convictions, has since been arrested and charged with attempted murder.

He has also been charged with kidnapping with a deadly weapon, discharging a firearm within a structure, burglary with a firearm and carrying a concealed weapon, according to Fox5.

And, at a press conference on Monday...

The harrowing CCTV footage of the attack was released by the Las Vegas Metropolitan Police.

The footage is difficult to watch...

Thomas can be seen walking calmly into the concierge area as he talks with two members of staff.

He can then be seen pulling out a chair...

Almost as if he is about to take a seat at the desk.

However, rather than taking a seat...

Thomas takes a couple of steps back and remains standing.

He can be seen searching in his coat pocket...

All while the manager, standing to his left, continues talking, evidently unconcerned by the man's behavior.

But then, out of nowhere...

Thomas is seen casually pulling out a handgun and holding it out in the palm of his hand.

The female member of staff sitting behind the desk immediately stands...

And, after firing a warning round against the wall, Thomas allows her to scurry past and out to safety.

The manager wasn't so lucky, however.

He remains seated while Thomas stands over him, still brandishing the weapon, in an intense stand-off.

Then, in a horrifyingly casual manner...

Thomas fires a round directly into the manager's leg, causing him to crumple to the floor.

The manager can be seen writhing around in agony...

All while, Thomas stands over him, hand in pocket, and in a scarily calm and composed manner.

Thomas seems a little at loss at what to do next...

And, while the manager remains crumpled on the floor, stands and looks uncertainly behind him.

But, he then gets a sudden stroke of inspiration...

And aims and fires another round into the stricken manager's leg.

It's a truly horrific situation.

And what this poor member of staff must have been going through is simply unimaginable.

Luckily, an armed police officer arrives moments after the second shot was fired...

And fires a round at the glass door, causing it to shatter and Thomas to cower in fright.

The police officer suddenly bursts in...

And, with his gun pointed firmly at Thomas, screams at him to drop his weapon on the desk.

And is then roughly dragged out of the building, falling to the floor in the process.

Thomas has now being charged for his actions...

According to prosecutors, Thomas told police that he "would do it again." He also told the court that he didn't want to kill the victim, just "mess him up a little."

You can watch the full incident here...

Though be warned: It contains extremely graphic footage. Thankfully, no one was more seriously injured in this terrifying incident, which serves as a poignant reminder of the danger of our slack gun laws. For more on our country's obsession with firearms, keep scrolling to read about the man who took his assault rifle to Starbucks...