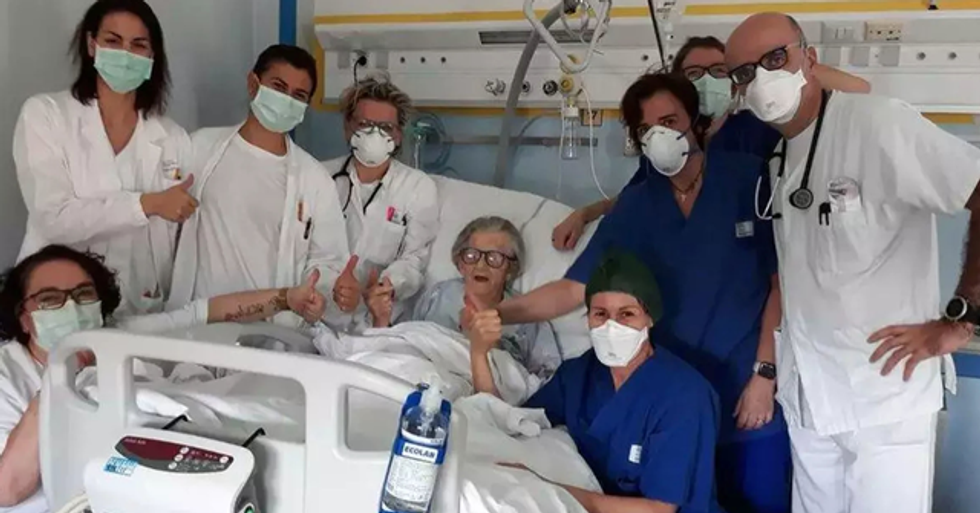 A ninety-five-year-old grandmother in Italy has defied all odds by recovering from the deadly COVID-19... Despite being in one of the worst-affected countries in the world.

The world is currently submerged in a very difficult and confusing time.

341,816 to be precise. And, devastatingly, a staggering 14,757 more have been reported to have died from the illness.

And the virus is showing no signs of slowing down.

Since the first COVID-19 patient in Washington, there have been 35,070 confirmed cases across the country and 458 deaths.

And, earlier this month, President Trump declared a national emergency to combat the coronavirus pandemic, freeing up $50 billion in federal funding and promising a screening website and drive-by tests.

Amid the outbreak, there's been a lot of talk about "at-risk groups" and "underlying health conditions."

All of which can make someone more at risk of the virus, and make the symptoms even more serious. While we know that for many of us, the virus can have mild symptoms, there are some groups where matters can be much more severe.

But what are the specific health conditions and lifestyle factors that make the virus more serious for someone?

According to the British Heart Foundation, those with heart disease or circulatory problems are a greater risk of suffering complications and being admitted to the hospital due to the virus.

As per the American Lung Association, those with life-long lung conditions are at greater risk of suffering worsened symptoms.

The American Diabetes Association states that those with diabetes are not necessarily more at risk of catching the virus, but of suffering complications and severe symptoms if they do get infected.

The Times reports that those with high blood pressure, especially men - according to studies across Europe and Asia - are at greater risk.

“It’s not a pattern that we’re used to. In influenza the main risk factor is asthma. This is different: high blood pressure is not a risk factor for influenza."

Those currently undergoing treatments for cancer have a weakened immune system caused by both cancer and the treatment.

It is believed that those with low CD4 counts and those without consistent access to HIV treatment are at an increased risk.

Treatments for these diseases cause the individual to become "immunosuppressed," aka they have a weaker immune system, therefore having a greater chance of being infected.

The same as above - these individuals have a weakened immune system already.

Asthma sufferers are also thought to be at increased risk due to the virus causing an infection in the respiratory tract. Jessica Kirby, head of health advice at Asthma UK, said: "Respiratory viruses like this can trigger asthma symptoms and could lead to an asthma attack." "It is essential that you take your preventer, daily as prescribed. This helps cut the risk of an asthma attack being triggered by any virus, including coronavirus."

Smoking, including second-hand smoking, gives people a heightened risk as it "reduces your natural protection against infections, like coronavirus," a press release from the Irish health service states.

Yet, amid all of these conditions and lifestyle choices...

It is the elderly who are the most vulnerable in this crisis.

But, one elderly woman has somehow defied all odds...

By fully recovering from the virus, despite being in one of the high-risk categories.

And was admitted to hospital on March 5th, after contracting the potentially deadly virus.

But, according to Italian media, Ms. Corsini's health improved "without antiviral therapy", making her the oldest person to recover from the virus in her country.

She has taken the whole thing in her stride.

The pensioner t0ld Italian newspaper Gazzetta Di Modena: "Yes, yes, I'm fine. They were good people who looked after me well, and now they'll send me home in a little while."

The grandmother has now been sent home...

Where she will remain while the rest of Italy continues with its lockdown. Sadly, Italy isn't the only country in full lockdown as the rest of the world has been brought to a complete standstill... Including Hollywood. Keep scrolling to hear which TV shows and movies have been postponed and delayed by the virus...