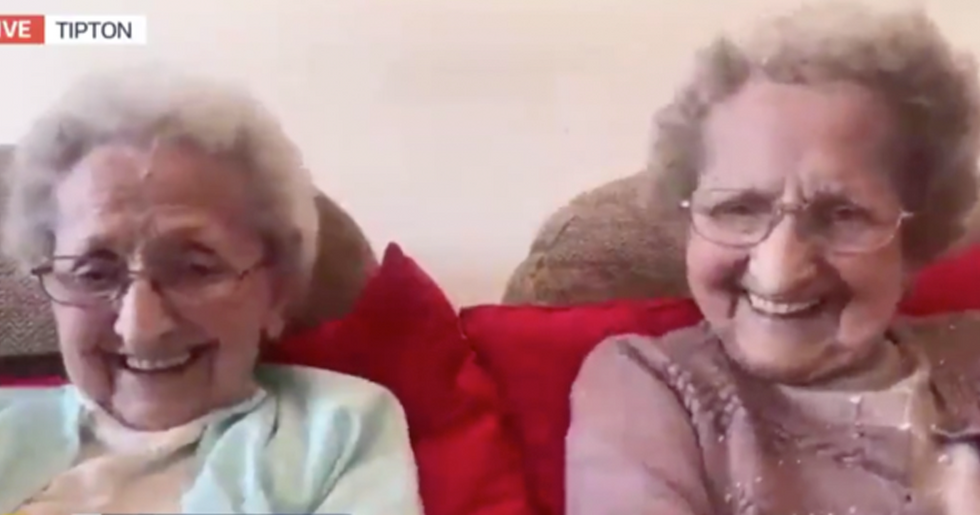 A set of ninety-five-year-old identical twins have given their hilarious, yet slightly x-rated secret to living a long and healthy life.

Keep scrolling to read about Lil and Doris, and to watch their incredible interview for yourself...

We've all wondered what the secret to a long and healthy life is.

Staying fit, eating healthily, having a daily glass of wine... the list goes on.

But no one really knows the true secret behind a long life...

And most of us can only hope that we're doing the right thing.

There have been countless tales of people in their nineties giving their own advice on a long life...

And, of course, it often revolves around the daily intake of some sort of liquor (if that is the secret, I'm going to live forever.)

But now, 2 women have come forward with their own secret to a long life...

And, surprisingly, it doesn't involve a daily tipple.

It involves something a little more x-rated...

Identical twins, Lil and Doris Cox, from the United Kingdom, have gone viral today for their amazing outlook on living a long and happy life.

Which has given them the prestigious title as Britain's oldest set of identical twins.

So, to commemorate the special occasion...

The twins were invited onto the breakfast show, Good Morning Britain, which is hosted by the notorious, Piers Morgan.

Now, we all know that Piers is usually the one to dominate these early morning episodes...

And guests on the show have famously struggled to get a word in edgeways with the argumentative host.

But, on this occasion...

It was Lil and Doris who stole the show.

The twins were an instant hit...

Britain’s oldest twins on good morning Britain this morning is what I aspire to be like with my best pal at their age
— moll b (@moll b)1589875020.0

And the nation were quick to fall in love with Lil and Doris' electrifying energy and charisma.

People all over the U.K. took to social media to praise the twins...

And many even insisted that they had brightened the rest of their day.

But there is one part of the interview that is more memorable than the rest...

And that is the twins' secret to a long and happy life.

During the interview, Piers asked the twins how they were getting on during lockdown...

In which the duo replied: "It’s alright, a bit boring at times! [We're] not missing a lot!"

The topic then turned swiftly to their age...

Piers broached the topic of just how they've reached such a milestone in such great health. "What is the secret to living so long and so well?"

Doris leaned forward, jabbed her thumb at her sister, and replied: "Plenty of s*x!"

And Lil scolded Doris while she sat back and laughed, with a rather smug look on her face.

And that wasn't the end of it.

Lil then admitted that she had a little fantasy of her own...

Piers then asked the pair how they would feel about a more age-appropriate romance...

Captain Tom Moore - the army major, who found huge fame by raising money for the NHS by walking around his garden - was thrown into the scenario, but the women quickly put that idea to bed. "I want bloody thrilling, not killing!" Lil shrieked.

Since the episode aired today, Lil and Doris have been catapulted to viral fame...

Twins Lil and Doris from Tipton have got me laughing out loud. So cheeky. A night with Jason Statham lol! #LilandDoris #GMB
— Maria (@Maria)1589874582.0

And a video that Piers shared, which is captioned, "My favorite moment on TV ever", has had over 94,000 views.

Some have even called for the charismatic pair to get their own show.

Now that I would watch.

You can watch the hilarious moment here.

Lil and Doris - we love you! For more on older women who are living their best lives, keep scrolling to read about the trio who decided to self isolate together...