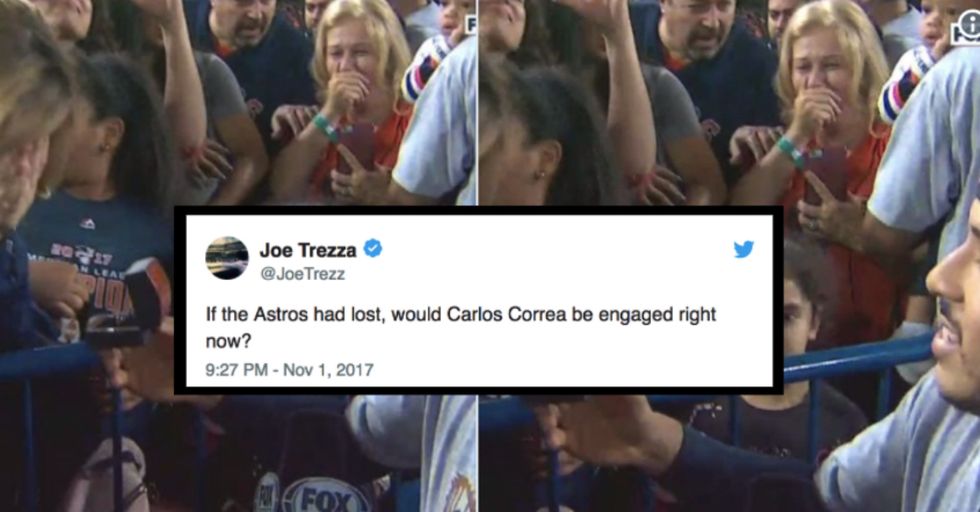 This wasn't your typical ballpark proposal.

Last night, the Astros won the World Series for the first time, with a 5-1 lead against the Los Angeles Dodgers. The Astros shortstop Carlos Correa chose to make the night one of the greatest nights of his life for more reasons than his team's win.

He was talking with a reporter at the edge of the field after the game when he said, "And right now I'm about to take another big step in my life."

He reached into his back pocket and turned to his girlfriend, who was standing behind one of the barriers on the side of the field. He said, "Daniella Rodriguez, you make me the happiest man in the world. Will you marry me? Will you marry me?"

Daniella jumped out from behind the barrier and gave Carlos a big hug and a kiss.

After a few moments, Daniella was clearly still processing what was going on. Carlos asked, "Yes?" "Yes" Daniella echoed back. Carlos put the ring on her finger as the crowd cheered.

That's two rings in one night for Carlos!!

Joe Trezza, who writes about baseball for MLB.com, asked an interesting question.

Melissa Correa, a reporter, made a funny observation about the video.

As Carlos Correa proposes to his girlfriend, that little girl in the back, is all of us. https://t.co/TTUxisYYzJ
— Melissa Correa (@Melissa Correa)1509596838.0

She captioned the photo, "As Carlos Correa proposes to his girlfriend, that little girl in the back, is all of us." While we all can appreciate a good proposal story, some of us are feeling more left out than others. Thank goodness we're not alone.