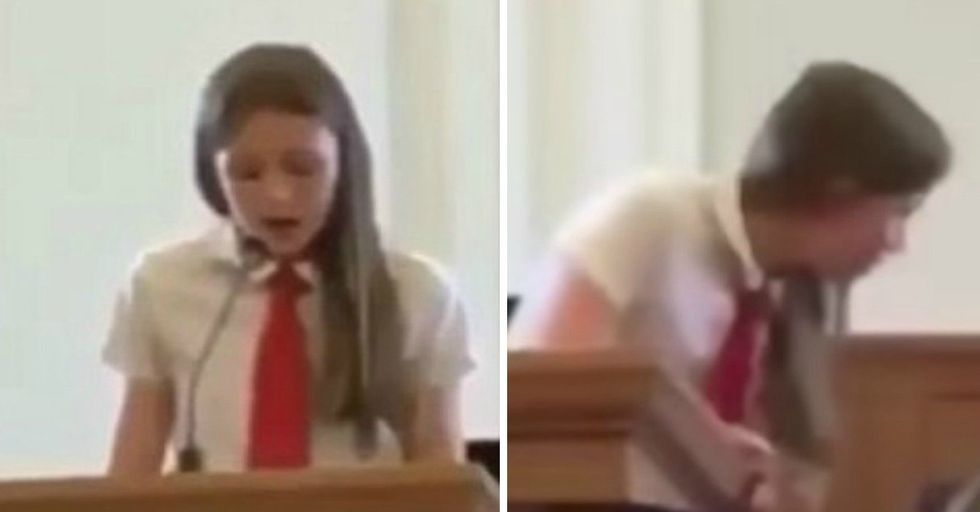 Young Mormon Girl Comes out as Gay to Her Church in Emotional, Heart Wrenching Speech

A Pew Research study found that only thirty-six percent of Mormons believe homosexuality should be accepted by society at large, so they're not exactly welcoming you with open arms.

Just ask twelve-year-old Savannah, who revealed to churchgoers in Utah County that she was a lesbian and told them she was proud God had made her that way.

People can be heard murmuring as Savannah continued to open up about her sexuality...until she literally couldn't be heard anymore.

The confused girl could be seen quickly tapping the microphone, clearly assuming it had broken mid-speech and not that officials had turned it off.

Officials had turned it off, and then they told her to sit down. Savannah can be seen collecting her speech and walking away, still confused and humiliated.

"She came off crying to me," her mother Heather told Daily Mail. "We both walked out to the hall, and I held her face in my hands and told her over and over that she is perfect and good. That there is nothing wrong with who she is, that she is brave and beautiful."

Her mom said that she had been asking for months to talk to the church, but they were reluctant because of the chance of rejection, which clearly wasn't unfounded.

"She had worked so hard at perfecting it so that it would portray exactly how she felt," Heather said. "We decided to let her do it because we thought it would be more harmful to silence her or give her reason to feel she is wrong in any way."

As for Savannah, she was both "sad" and "happy" at the same time.

"I was sad because I wanted to finish it, and I felt like what I was saying should've been heard by everybody else," she said in  he podcast I Like to Look for Rainbows. "I was happy because I could finally get out to everyone and show that gays aren't weirdos." You go, girl.