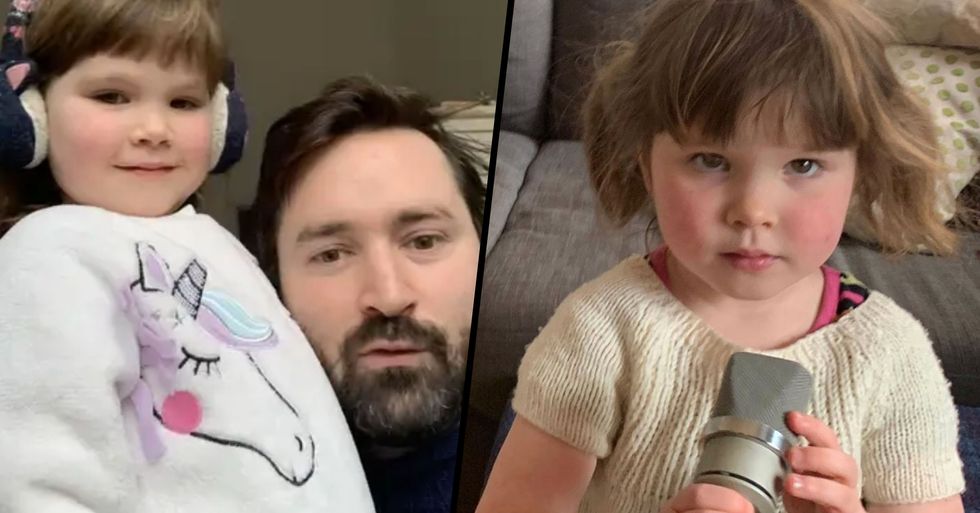 At a young age, kids like to get involved and try everything.

From painting to dancing to singing they seem to try it all. And for some parents that's when they discover that their child has a hidden talent.

Just like this one dad found after he helped his three-year-old daughter with a song that has now gone viral.

Keep reading to listen to the cutest thing you will hear all week.

Between the ages of two and five, children have such a sense of imagination.

An intrigue for everything and a want to explore.

Some parents can be seen as 'pushy' parents for how they encourage children to try activities.

But if they don't try hobbies they might not discover hidden talents.

Just like how one dad discovered his daughter's talent.

After she wrote and sang a song that has now gone viral.

Not a song that might be your typical tune.

But a hit regardless.

With a little help from her dad on the keys.

Her dad recorded the two of them performing the short 60-second song and posted it on his Twitter.

And online the song has received an amazing reaction.

The song talks about dinosaurs falling in love, eating people, and have a party.

But it takes a dramatic twist at the end.

'Fenn, my nearly 4 year old daughter, recorded her first ever solo song today. She came up with all the words herself and I helped her a little bit with the tune. It’s called ‘Dinosaurs in Love’.

And it has now been viewed over 5.1 million times.

Fenn, my nearly 4 year old daughter, recorded her first ever solo song today. She came up with all the words hersel… https://t.co/nYTpTsQmKt
— Tom Rosenthal (@Tom Rosenthal)1580240202.0

You can listen to the song here.

You might not expect to relate to a song written by a 3-year-old, but apparently people do.

Whilst others were taken back by the lyrics.

One user tweeted saying: "This was beautiful!! When she sang that they died, were in love and didn't say goodbye"

Tom even received a response from Spotify.

Spotify tweeted asking, "Has Fenn decided on an official release date yet?"

To which Tom responded revealing some news which fans of the song might be happy to hear.

Tom tweeted: "Hey just working on it as we speak! Getting it uploaded and reasy for Spotify ASAP!"

It isn't a surprise that Fenn is good at writing lyrics.

As dad Tom is a singer/ songwriter himself.

As a singer himself, Tom already had a home recording studio, making the song easy to record.

And he has previously recorded songs with both Fenn and his other 6-year-old daughter.

The song came together quite 'organically'.

Speaking to BuzzFeed News, Tom told them that it was Fenn who had wondered into his studio and asked to record a song.

He told BuzzFeed News: "She's by the microphone, she's got the headphones on, she starts singing, and she does as much as she can,"

"And then eventually after she's done enough little bits of it, it kind of all fits together,"

As a young child, it must be hard to keep Fenn concentrated on recording the song.

But Tom explained that "Sometimes we have little breaks. ... She gets bored, she wanders off, she comes back in."

Whilst the lyrics are by Fenn, Tom sometimes prompts hers to help.

"In terms of her singing and her timing, nothing's altered, but it's done in a couple of sections,"

Tom told them that he was surprised by the subject matter of the song.

"I genuinely couldn't tell you why she wanted to do a song about dinosaurs," Rosenthal said.

"She's got no particular affiliation with dinosaurs at all. They're not something she particularly cares about or not, this is just what was in her head at the time."

The family has made a trip to the Natural History Museum before but he didn't know to what extent she understood dinosaurs.

Talking of the response that the video has received on Twitter, Tom said that it was unexpected.

"I know what a nice song sounds like and I was like, That's a really nice song. And it's quite potent because you've got a little [almost] 4-year-old talking about things dying, and so many things are dying currently in the world," he said. "I think it's just kind of evocative of the moment."

But despite its millions of listens, Fenn remains unaware of the success that her song has had.

"She has absolutely no idea," Rosenthal said. "She literally did this song, we listened back to it five or six times, and then she's on with the rest of her life."

Three years old is very young to already have your song go viral.