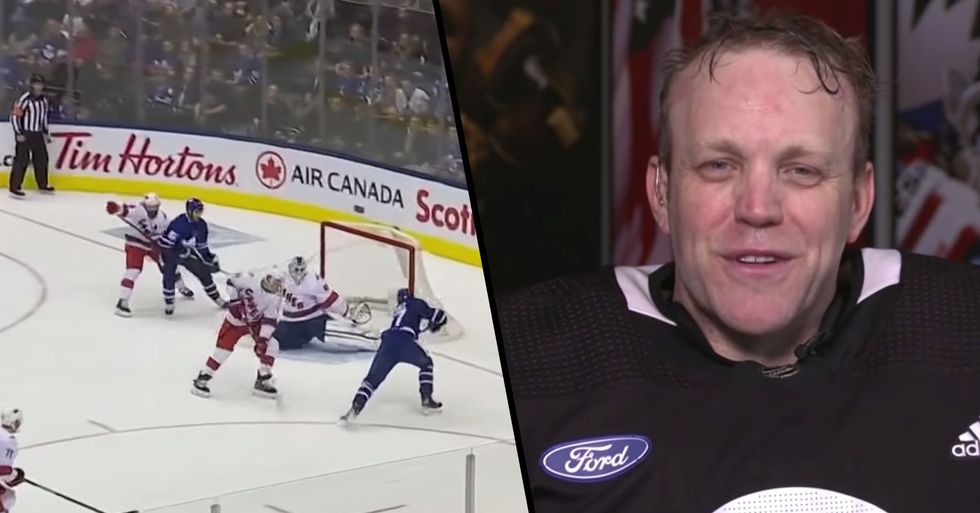 The NHL is considered to be the premier professional ice hockey league in the world. If you get the chance to be part of something that big, you aren't going to pass it up.

One man was sat watching the game with his wife, when he was picked out of the crowd to make his NHL debut, what happened next was incredible!

Ice hockey is a game we all know and love.

And even if you don't watch it, everyone can appreciate the effort and comradery shown by the players.

There's lots to love about the fast-paced game.

Throughout the game's history, there have been a few crazy traditions.

When hockey was played in the early days, people used frozen cow poop for the puck. Yep... gross.

They do this to prevent the pucks from bouncing on the ice during a game.

There is also a rule about goalies.

If a team's 2 goalies are injured, then technically anyone can play that position, even a fan! Scroll to the end to watch the video of a guy that did just that!

It's not every day you get to play at the NHL.

An ice hockey player was pulled out of the crowd during a match.

He didn't just make his debut...

David Ayres was sat watching the game with his wife Sarah.

They were both watching the game at Scotiabank Arena in Canada.

It was when the goalie, James Reimer was suddenly injured during the match, that things got serious.

David was the on-call goalie.

The forty-two-year-old was the third choice goalie for Carolina Hurricanes or the Toronto Maple Leafs if either side needed a backup.

The Hurricanes lost 2 goalies in one night.

Their reserve goalie Petr Mrazek was injured during the second part of last night's game.

Luck wasn't in the Hurricanes' rink.

But all that was about to change...

When he saw the first injury, David started getting changed.

He hoped he would finally be called out to help with something other than smoothing out the ice.

He was called to play twenty-eight minutes of the final half, and won!

He became the oldest goalie in NHL history.

He said it was surreal to win his regular-season debut.

He said: "I had a couple of text messages that told me to get in there. I hadn't seen the footage of Mrazek's injury. I was in the media room by myself and a guy came in and said, 'Get going. Get ready'."

Ayres not only got paid five hundred dollars for his debut, but he also got to keep his shirt!

He was definitely man of the match.

During his twenty-eight minutes of fame, he managed 8 saves, letting only 2 shots past.

Ayres was the team's "first star." He said he loved every minute of it, saying: "It was awesome, obviously the time of my life out there. Once in a lifetime, I'll take it."

"That second period was a little shaky, but I told the boys in the dressing room, once we come in for the third, I'll be settled down and ready to win this one."

Carolina's Erik Haula helped Ayres calm down, ready for his debut. Watch the video below...

Ayres later revealed what helped him in the rink, saying: "He said to me, 'Just have fun. We don't care if you let 10 goals in'. That settled me right down, and it was great." Well, the talk clearly worked, and he made the Canes proud!