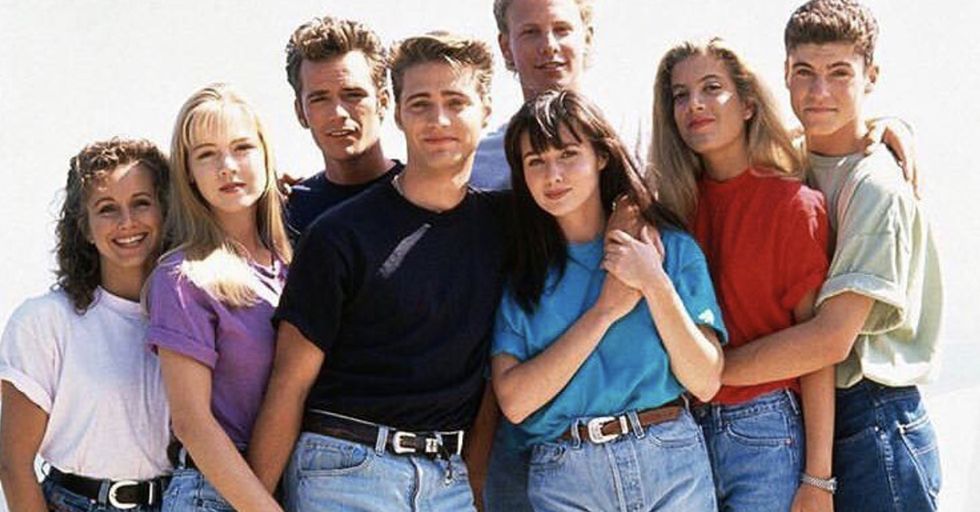 I was a little too young to watch the original Beverly Hills, 90210 when it was on TV. The show ran from 1990-2000 and at the time I was more into vegging out to Arthur and begging my parents to let me stay up until the end of TGIF than I was into watching beautiful teenagers in LA navigate high school.

But a few years after the show ended, when I was in high school, they played reruns on weekday mornings and I used to watch half an episode before school. The only time I ever got in big trouble in high school was because I really wanted to finish an episode of 90210 so I had my brother call into my high school to pretending to be my dad and said I was going to miss the first period. Imagine having to explain to your principal that you missed trigonometry because you had to know what happened at the 90210 prom. I lived it.

It ran for ten seasons and became one of the most popular shows of the 90s launching teen heartthrobs like Tori Spelling and Luke Perry's careers.

The show was about twins Brenda and Dylan who moved to LA from Minnesota for their dad's new job.

And found the fast-paced, sun-bleached LA life completely different from their old life in Minnesota. And obviously much more dramatic.

It also launched the equally successful spin off Melrose Place.

Fox has announced that this summer it will air a revival of 90210.

Shannen Doherty and Luke Perry apparently haven't signed on for the revival.

You might also be saying, "Wait, didn't they already remake this show?"

And you're right. A reboot of 90210 was on The CW from 2008-2013. But it had completely different actors playing different parts with loose connections to the original characters in the original Beverly Hills, 90210.

The new series set to air on Fox is something a little different.

Although it stars the same cast, it's not a sequel to the original series.

Instead of playing their roles from the show, the actors will be playing fictional versions of themselves.

And the plot of the show will be the fictional versions of themselves trying to get a reboot of 90210 going.

It's a reboot about making a reboot of itself.

It's not confusing at all.

The show will center around the actors trying to create this reboot, but finding the real-life drama between them is more complicated.

It is produced by the actors themselves. Tori Spelling and Jennie Garth were the ones who got the idea started and have been working on the series for a year.

Chris Alberghini and Mike Chessler, who wrote the 90210 reboot in 2008, will write the series.

They are also producers.

The show will be a six-episode limited series.

And is billed as a drama, even though to be honest, it kind of sounds like a comedy.

The show already has an official description.

It reads, "Having gone their separate ways since the original series ended 19 years ago, Jason, Jennie, Ian, Gabrielle, Brian, and Tori reunite when one of them suggests it’s time to get a Beverly Hills, 90210 reboot up and running. But getting it going may make for an even more delicious soap than the reboot itself. What will happen when first loves, old romances, friends and frenemies come back together, as this iconic cast — whom the whole world watched grow up together — attempts to continue from where they left off?"

The stars are already psyched about it.

They've been posting on their Instagrams to get people excited about the reboot.

They all look so young! It will be so weird to see them all grown up together.

The whole cast seems so excited!

But look, we can't get through a post about 90210 without talking a little gossip.

And the elephant in the room is: will Shannen Doherty and Luke Perry appear on the show? As of yet, they haven't signed on.

If you know anything about 90210, you probably know Shannen Doherty left the show after three seasons.

She was reportedly fired.

Co-stars claimed she was difficult to work with.

There were tons of reports of fighting between the cast members, especially between Doherty and Jennie Garth. She was also apparently late, rude on set, and demanding, all factors that allegedly led to her dismissal from the show.

Doherty doesn't deny the rumors and has said that she was immature.

But she was also written off her next show, Charmed, after reported disputes with the cast members, so of course, the "hard to work with" rumors became her legacy in Hollywood.

But will Shannen return for the reboot of 90210 despite her decades-old clash with co-stars?

It's not totally out of the question. After all, she did make an appearance on the 2008 reboot of the series.

And what about heartthrob, and resident bad boy Luke Perry?

So while he may be too busy to join the reboot, he has said he would be interested.

In a 2018 interview with The Today Show, Perry said, "I'd like to go back and work with my guys," he said. "Yeah, I've been doing something else and that's been fun, but I'd love to do scenes with Shannen again."

So maybe everyone has grown out of the drama that once surrounded the 90210 cast.

" target="_blank">Getty Images Just hopefully, for the sake of the reboot, only off-screen.

People are super excited for the reboot.

Some people are very, very excited.

It was a really popular show!

Your prayers have been answered!

If this is the kind of thing you pray for.

Will you watch the new 90210 or are you tired of reboots? Let us know in the comments! Note: Since this article was written, it has been reported that Luke Perry has suffered a stroke, making his return to the popular '90s show unknown.