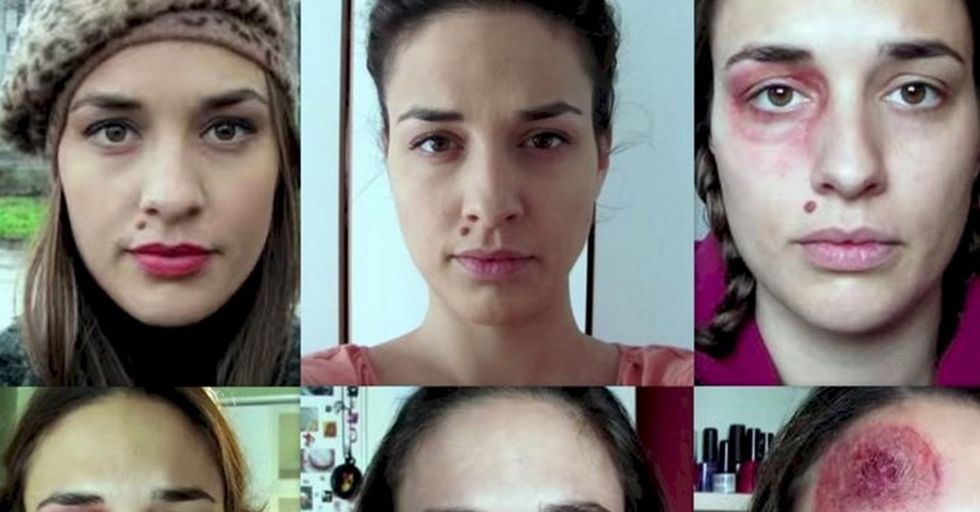 Domestic abuse is an epidemic that had forced many, women especially, to suffer in silence out of shame and embarrassment.

Fortunately, social media has allowed victims and advocates to speak up to those afflicted. Their message? There's not an ounce of shame in being a victim. Your story should be told so that others are aware and can be empowered to get help.

Those suffering from domestic abuse keep their struggle secret out of devotion to their abusive partner or a fear that their life will be upended if they report the crime.

There are many reasons that make it difficult to report such a personal crime. But failure to do so means the victim runs the risk of the abuse escalating, putting them in a life-threatening situation.

October is approaching and serves as Domestic Violence Awareness Month.

As such, it seems like a particularly appropriate time to share the haunting work of one brave woman who took on a brutally honest project that strove to put a face to the epidemic of domestic abuse.

Fortunately, slowly but surely, the stigma of domestic violence is shifting from the victim to where it belongs — the perpetrator.

It's not happening overnight, but it is happening. Every time someone speaks up or makes a statement, society moves a little closer to appropriately dealing with the issue. There's still a long way to go, however.

Putting a face and a personal experience to an account of domestic abuse goes a long way towards this goal.

That's exactly why one artist's work, documenting her own abuse in a time-lapse format, is so essential and such a powerful tool. It might not be easy to watch or cope with, but that's exactly why it's so important. What you're about to see is happening to thousands of women all over the world every day. Only no one is telling their stories.

We hear about the horrific practice of domestic abuse, and while it's alarmingly widespread, many have difficulty putting a human element to the epidemic.

This brave woman sought out to do just that by documenting her struggle in an abusive relationship by taking and sharing a picture every day of her own face. The photos might be considered graphic and are certainly upsetting, but they play an important part in displaying the harsh realities of something many of us hear about but don't often witness. This photo series is called "edna fotografija dnevno u najgoroj godini života / One photo a day in the worst year of my life."

Here she is early on in the series, looking "normal."

The pictures start off pretty innocent-looking, but quickly take a turn. The pictures were also incorporated into a video that you can see below.

Before she bares the physical scars and marks, you can see an early change in her demeanor, which is an important manifestation to look for.

Then, as is inevitable in a photo series of this nature...

...we begin to see the physical bruises that show us abuse happens to real people and often goes unaddressed, sadly.

She's a victim, plain and simple.

But hopefully her bravery in documenting her struggle will open the eyes of others who are abused or can help those who are.

It's heartwrenching to see this continue.

It's unclear how or why no one intervened, but such is the case with many, many cases of abuse. The victim is made to feel powerless by the abuser and the cycle continues with tragic consequences.

There's always help, but it's hard to realize that when you're made to feel as she does.

She ends the video and the series with a powerful message.

It reads: "Help me. I do not know if I can wait for tomorrow." This is the heartbreaking truth for so many women.

A week after the video was released, another one was made featuring this image.

A TV network in Serbia, B92, published the image and videos to raise awareness. Let's hope it works, and this woman gets some redemption from her horrific ordeal.

Here's the full video. Share if you can to spread awareness of the ugly, real, physical side of domestic abuse.