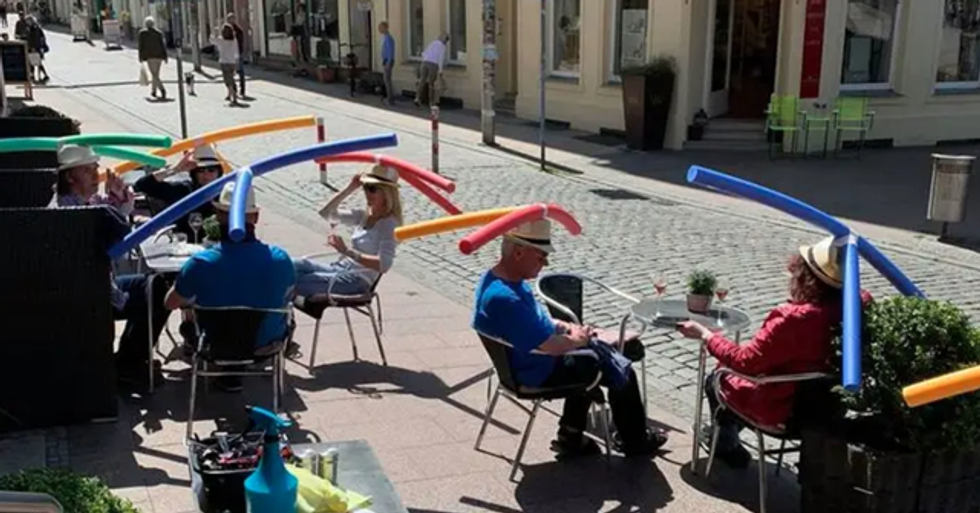 Shortly after reopening, a German cafe has come up with a rather inventive way of keeping its customers safe from the deadly virus...

And, as a result of fewer people out and about, our hospitality industries have taken a beating.

One of the devastating effects of this pandemic is the closure of our restaurants, cafes, and bars.

To prevent the spread of the virus, landlords and restaurant owners all over the world have been forced to close their doors.

It has been a truly dire time for our hospitality workers.

Which means our restaurants and bars can start making some much-needed cash.

Many restaurants and bars are back open for business...

So restaurants and cafes that have reopened are having to go to extra lengths to protect their staff and their customers.

Some have decided to open on a "take-out only" basis...

So customers will be unable to sit close together in a confined space.

And others are resorting to strict hygiene measures.

Those who have resumed full service are requiring staff to wear gloves and facemasks as they work.

But there are some businesses that are taking their safety precautions to a whole new level...

And it is a lot more extreme than disposable gloves.

A newly-reopened cafe in Germany has recently gone viral for its hilarious safety measures.

Germany has been easing its strict lockdown measures since April, and Cafe & Konditorei Rothe, located in the city of Schwerin, has been the latest business to reopen its doors.

And, in order to celebrate...

The cafe's owner decided to do something both fun and safe for her returning customers.

The cafe's owner, Jacqueline Rothe, handed out pool noodles for patrons to wear on their heads as a social-distancing enforcement... And they look hilarious.

Well, while pool noodles don't actually protect people from the virus, their length will prevent people from standing too close to one another.

Okay, the whole thing was a joke.

Yep, this cafe owner didn't actually make her customers wear pool noodles... She just handed them out as a light-hearted joke to make people smile.

On her gimmick, she said:

“In these difficult times it’s a pleasure to make others smile."

Sadly, not all restaurant owners have been so thoughtful.

Keep scrolling to read about the owner who defied all the rules by deciding to reopen for hundreds of customers amid the devastating pandemic...