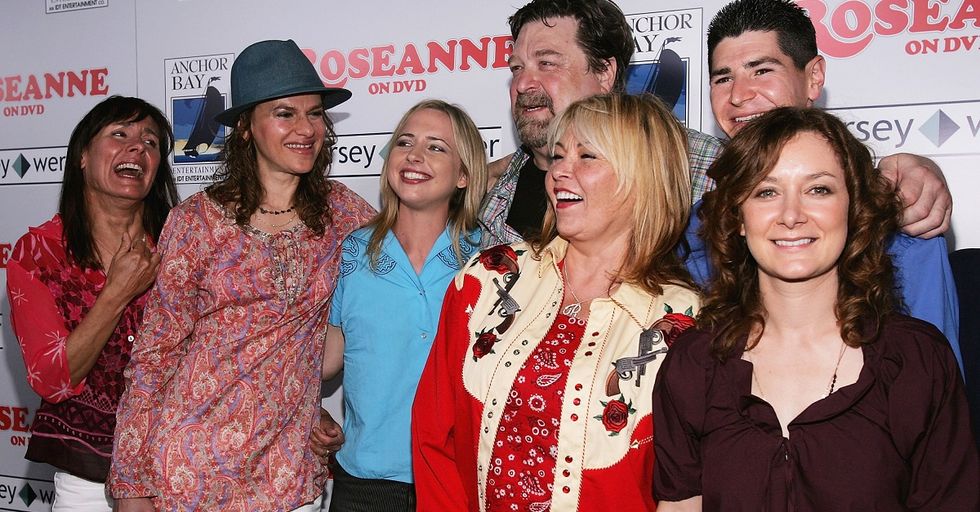 Yes, it's actually happening. The hit show Roseanne is getting a TV reboot, and even though it hasn't even started filming yet, the new version is already stirring up controversy with parenting activist group, One Million Moms.

But Roseanne has been inciting controversy and criticism since it first aired in 1988, so why now?

The original show inspired plenty of protests in its day.

As far back as 1994, the show became one of the first to show a kiss between two women on network television. The episode caused sponsors to pull their ads, and drew complaints, but the show continued to break barriers.

The show was committed to dealing with real issues real families face.

They didn't shy away from depicting non-straight people, tackling the still-controversial issue of abortion, and even their own characters' racism. It was a show about an imperfect, working-class family, and it didn't gloss over the realities of life for the sake of staying PC.

So of course the reboot is looking to push boundaries also.

The show is looking to cast one of Roseanne's grandchildren as being "gender creative." Saying they are looking for a child actor that "displays qualities of both young female and male traits." According to information given to Showbiz411.

The choice actually makes a lot of sense.

The character, Mark, would be the child of David and Darlene, Roseanne's daughter who was played by Sara Gilbert. As many fans of the show recall, Darlene was a character that herself pushed gender norms, while David was often depicted as a sensitive artist in contrast to the family patriarch Dan's rugged masculinity. It makes sense that their child would be someone who doesn't fit perfectly into the expectations of their gender.

But of course, some people have decided to have a problem with this.

A group called One Million Moms is calling for a boycott of the show. Now, aside from being known for not at all having a million members, they're basically just a group that gets angry every time there's a gay person or character on TV. Seriously, they must have a Google alert set up for it, because they're more on top of where LGBTQ people are being represented than anyone else we know. But that's not all...

The group is claiming that the character promotes the "transgender agenda."

Which is apparently a plot to undermine their notion that "“DNA proves a female is female and a male is male. There is no gray area here and no such thing as ‘gender fluid,’" Now, far be it for us to correct an extremist religious group on their understanding of science, but there is a big difference between sex and gender, and an even bigger difference between the science of gender and how we express gender in society. Remember, it wasn't that long ago that it was considered indecent for women to wear pants. A notion that didn't then and does not now have anything at all to do with DNA.

But what's impressive about this freak out is how they even have time for it.

In a world where most of us are just trying to find enough time to go to the gym in between staying caught up on all our favorite shows, these women seem to have a lot of extra energy to spend worrying about other people's genders. And whether or not those genders are acceptable to them. Not to mention all the extra work they're putting in to make sure people who already feel alienated from society are made to feel even worse.

And this TV show doesn't even exist yet.

They're protesting a character - which is a fake person someone made up - that has yet to be cast on a tv show that does not yet exist. It's almost as though they're desperate for something to protest, so had to dig up something that wasn't even a thing yet. Maybe this helps take their mind of the constant threat of nuclear war?

Plenty of other people, however, simply don't see the problem.

Just like in the past, the show is depicting life as it is, not life as a far-right Christian group wishes it was. In real life, gender is a construct that everyone does differently. Why not have a character that reflects that? Not only because it makes for a more interesting story, but also because it's something a lot of people watching can probably relate to dealing with in one way or another.

And this isn't even the first time the group has pulled this.

Scratch that, this isn't the first time the group has pulled this this month. Just a few weeks ago, the group was up in arms over the depiction of two gay parents on Doc McStuffins. A cartoon show the group is apparently very threatened by. This group has gone after ALL kinds of shows...

The group has also tried to get shows for adults cancelled.

They recently came after the AMC show Preacher for "blaspheming Jesus", which would be bad if AMC were say, a church the moms were members of. But unfortunately in a free society "blasphemy" is not something you can use to shutter a private business. The group has been unsuccessful in their efforts thus far.

Part of their problem, again, is there aren't one million of them.

Not even by half. The group has about 90,000 likes on Facebook. Meaning they'd need to come up with 910,000 more members to even hope to live up to their name. And then they'd have to explain to all of us how they found that many people without Facebook accounts. But really, it seems like someone needs to sign these moms up for some after school activities.