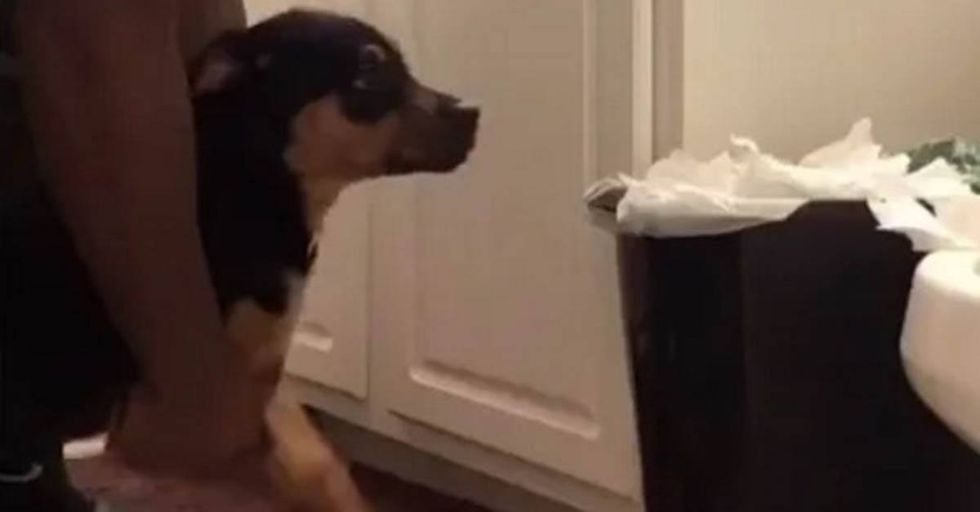 Puppies can be quite a handful — sometimes quite literally. Adrian Thomas' three-month-old Rottweiler puppy Luna can get into quite a bit of trouble, as you can imagine.

Surely she could do no harm! Just look at that precious puppy. Well, like most mischievous puppies, Luna eventually got herself into some trouble.

She attacked a roll of toilet paper and made quite a mess. Her owner came up with a creative solution to the problem, though.

Adrian decided that the best way for Luna to learn was to clean up her own mess, jokingly saying that she has to learn what happens after the fun. We learn that lesson as kids. Why shouldn't the pup?

Not everyone saw the humor in it though, as some called Adrian out for abuse. REALLY?

Sure, it might not actually work to teach Luna a lesson, but she seems to be doing just fine, and where's the harm?

Most found the incident and Luna's reaction hilarious.

Maybe she'll learn! She probably won't though. Still, if it makes for decent entertainment, I'm not sure what the problem is.

Others offered advice to Adrian on how to properly train his dog, which is actually kind of helpful, especially by Twitter standards.

Probably true, but Luna looks pretty confused by this game.

Several more people have vowed to adopt Adrian's method in the future.

While it doesn't seem like the most effective training method, it sure is a cute one.

We quickly found out that Luna isn't the only dog that likes to make a mess with toilet paper.

And it turns out dogs aren't alone with their vendetta against toilet paper.

People even shared their cats getting in on the action.

Hey, it's the cheapest, if not the cleanest, toy any pet owner could imagine.

Luna doesn't seem to be learning though...

But at least she gets to have some close bonding time with her owner while they pick up her messes!

Luna's owner is continuing to update her Instagram page.

If you would like to watch Luna continue to get herself into mischief, you can find her there. Wish her luck in her training!