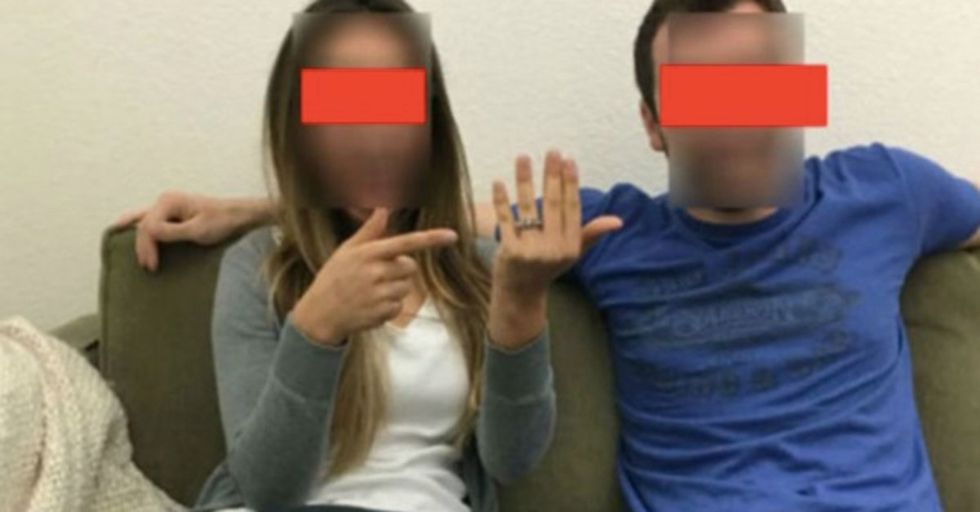 Nowadays, it's pretty standard procedure to share a quick post-engagement pic with your friends and family on social media. But one couple was in such a rush to share the good news via a charming photo that they didn't realize what else they were unintentionally sharing with the world.

It didn't take long for their audience to let them know what they were seeing.

These Facebook screenshots from Bored Panda tell the whole story.

Here's the pic they posted with the statement above.

It's all very sweet and, not suspicious in any way. I mean, this is pretty standard for what engagement pics and posts look like, right? Well, maybe they're not often taken on a couch at a coffee table, are they?

The setting was odd enough that a few people looked around the rest of the pic...

...and one person quickly saw something that maybe wasn't intended to be captured on film or shared!

Since it was clear that something was up, a friend offered a (very public) bit of advice.

I guess it's better than no advice at all, but you'd think a private message would be the better way to handle this, wouldn't you?

As you'll see, it wasn't clear to everyone, but people could tell from earlier comments that something was afoot in this pic.

What's that there in the corner?

Is that... is that a pregnancy test?

Apparently, it is, and some of her friends pointed it out in a less-than-subtle way.

We may never know if they got that call.

This is kind of how we all feel right now.

But thankfully, there is a resolution to this madness.

Sort of, at least.

They tried to play dumb with this post, but...

...the proverbial cat was already out of the bag.

Or, more accurately, the pregnancy test was on the table.

Oops. Well, it's a little tricky to talk your way out of this one, isn't it?

Fortunately, they knew they were caught, so they did the right thing and owned up.

'cause really, there isn't much else to do when you're caught red-handed like that.

"Oh, and btw, completely related to anything in the pic..."

At least they don't need to worry about how they're going to break the news to their friends and family about the pregnancy!