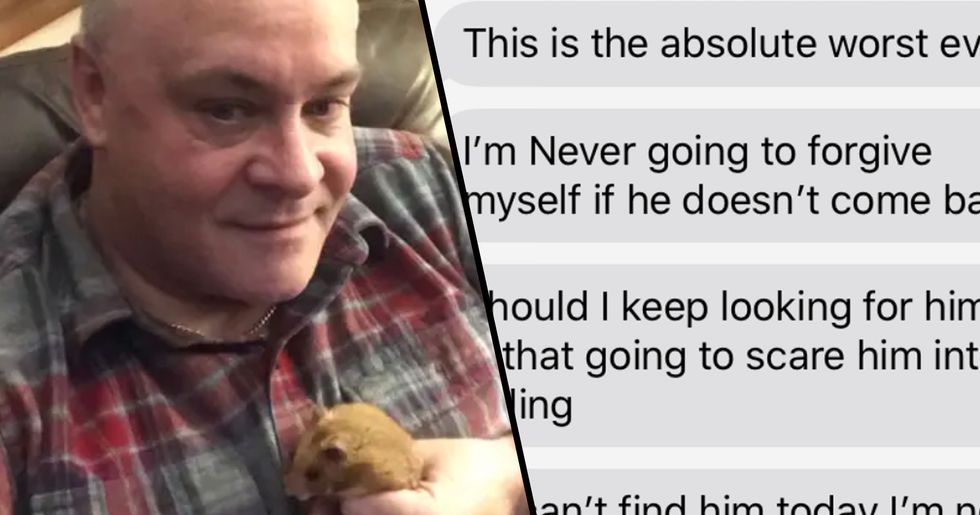 A big part of anyone's childhood involves begging your parents to let you have a pet. A cat, a dog, a goldfish, anything really. For a lot of us, it didn't work out as we hoped, but for those select few that were granted their wish, they got their pet.

Well, nineteen-year-old Steph Veerman loved her pet hamster, but when she received a shocking call from her Dad one day, things took a twist.

Keep scrolling to find out exactly what happened after her hamster suddenly went missing...

It all started with a call...

Steph Veerman received an urgent call from her father last Sunday. As she ran into the bathroom to take it, she couldn't help but think the worst.

"What if someone's died?"

Her mind wondered all sorts of things and when she heard her dad crying on the other side, she thought her worst fears had been confirmed.

However, what he said next shocked her...

"He was blubbering," the nineteen-year-old said. "He couldn't get out sentences."

What caused this upset?

The problem that left her father in tears was the fact that he had lost Steph's pet hamster, Chester. That's right, the urgent call consisted of Daniel Veerman sobbing from the other end, admitting what he had done.

Daniel and Chester spent a lot of time together since Steph went back to school.

Now in her sophomore year, Steph had left her pet to her dad who seemed happy to have the responsibility while she went back to Emmanuel College in Boston.

It wasn't a bother for her dad as Chester was a "pretty chill" hamster.

That worked out for him because, according to his daughter, he was a "conservative Catholic, a lawyer, and usually strict, but when it comes to animals and babies, he has the biggest soft spot." I mean, who doesn't right?

And that Sunday was no different. While Steph was out, Daniel "put him in his little ball like [he does] every Sunday," but was left shocked after he turned his back for a minute and then turned back to realize Chester was gone.

Daniel, who was flustered in the moment said this:

Daniel told BuzzFeed News: "I had a meltdown. I was having a freaking panic attack!"

“At first, I wasn’t too keen on him," the single father said. “I grew up with German shepherds. I’ve never had, you know, when I first got it, it was like a mouse. It wouldn’t be my first choice of pet. But then I got attached. And even more because you’re taking care of it for your daughter."

So when Chester was involved in a disappearing act, he was devastated that he may have let Steph down.

Every Sunday, on "football day," Daniel cleaned Chester’s cage and made him exercise by putting him in his little, clear ball and setting him loose around his office under his watchful gaze.

But things didn't go to plan that particular Sunday...

“He’s a cunning creature. I think he took his hands and opened the ball, I swear to god. I cleaned the cage...and came back and he was gone and I had a heart attack."

For twelve whole hours, Daniel was in panic mode.

“It was a nightmare," he said. “I was calling him, screaming his name, thinking maybe he knows his name. I was looking with a high-powered flashlight."

But after about an hour of searching, he had to make the call to his daughter.

Calling it an emergency, he explained the entire situation to her. He was ready for tears from Steph's side too but instead, she replied like this...

However, Daniel commented saying that she was only saying that to keep him calm because she could tell he was very distressed at what had occurred.

During the search period, he made sure to keep his daughter updated.

He told her he knew Chester was "still alive" and that he would "keep looking" until he had found him.

"I don’t blame you at all. you shouldn’t skip work you are a lawyer and he is a hamster." Steph's replies did not make him feel any better. He continued his search for the missing pet.

He even went as far as to Google some solutions.

Expert hamster searching sites gave him some advice saying he would have better luck at night because hamsters are more nocturnal anyway.

So he followed the advice and did what he had to do...

“But I couldn’t just sit there all day, I was going crazy," Daniel recalled. “So I set traps. I re-created his cage in my office, took his toys and treats all around. Put out water. I thought if I didn’t find him at least he wouldn’t die because he would have food."

He waited... and waited.

“Right after nightfall, I saw him run across the floor. I came back and saw him standing on a book, cleaning himself, and I grabbed him." He then thanked God for answering all his prayers.

Steph decided that after the stressful situation was over, she would upload screenshots of the adorable texts to Twitter.

And obviously, they went down a treat. The internet loved them, and they soon went viral. I'm just glad the situation worked out in Daniel's favor and Chester is safe in his little hamster cage. And if you want to see more dad-related antics, then keep scrolling...