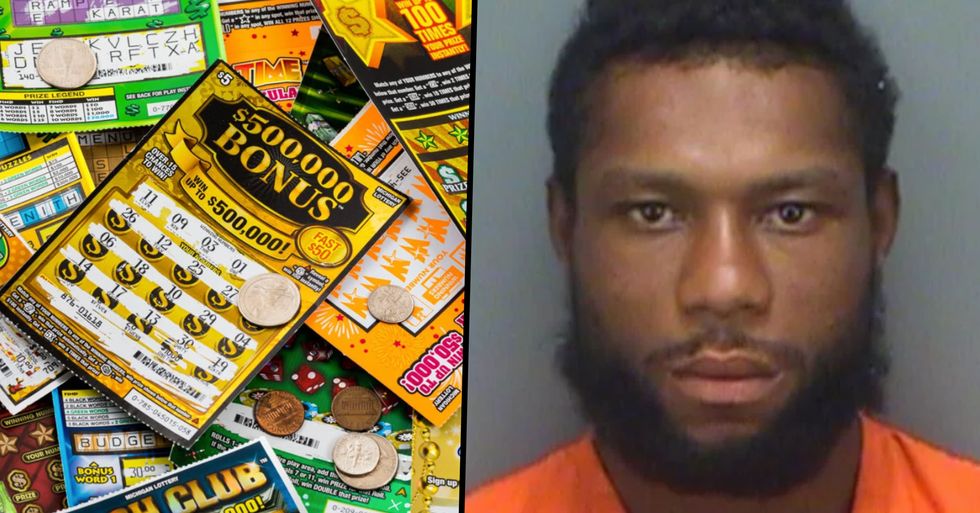 In an unbelievable turn of events, a Florida man tried to cash in a $30 lottery ticket in the same store that he had stolen it from.

You really can't make these things up...

We've all dreamt about winning the lottery, haven't we?

This is because it rarely ever happens.

Did you know that on average, a person has a 1 in forty-five million chance of winning the lottery? Just let that sink in...

It is actually more likely for an ordinary person to start dating a supermodel than it is for them to win the lottery.

As it is more likely to be struck by lightning!

So yeah, the odds aren't looking great for those hopeful lottery winners out there...

But that doesn't stop people from eagerly buying a daily lottery ticket!

Some people just love that feeling of winning.

But it turns out that some people love winning on a lottery scratch card a little bit too much...

And they're willing to get themselves into a lot of trouble just to get that winning feeling.

The Clearwater Police Department in Florida recently dealt with someone who was clearly desperate for a winning streak.

Twenty-seven-year-old Herbert McClellan won $30 on a lottery scratch card recently... and even though this isn't a lot of money, it's still a fairly big win!

But things weren't as simple as Herbert just winning $30.

It turns out that the man had stolen thirteen of these scratch cards from the Speedway convenience store at 32 Bay Esplanade, according to the police.

Obviously, Herbert felt he was in for a pretty good chance of winning something big with thirteen lottery tickets...

Even though the odds are 1 in forty-five million, and not 1 in thirteen!

Anyway, when Herbert discovered he had won a "whopping" $30 on one of the stolen cards...

He decided to go and cash it in immediately... at the same store he had stolen it from. What was going through this man's mind?!

The store workers knew exactly what he was up to...

And when he joyfully walked back into the store to claim his winnings, they weren't having any of it.

The police were called immediately who turned up and took Herbert into custody.

Clearwater Police Department later issued a statement about the incident.

The statement read: "For most people, it's their lucky day when they get a winning scratch-off lottery ticket. That was not the case this week for Herbert McClellan, who is currently sitting in the Pinellas County Jail because of a winning $30 lottery ticket."

"The problem is that McClellan stole 13 scratch-off tickets from the Speedway convenience store at 32 Bay Esplanade. When he found out that one was a winner, he went back to the same store to cash it in. That's when store workers called us, and we arrested him."

In the end, the unfortunate Herbert was charged with petit theft and dealing in stolen property...

So it's safe to say that it most certainly wasn't this man's lucky day!

Locals found the whole thing rather funny, it turns out...

And people have been questioning exactly what Herbert was thinking when he returned from the store he had just ran from.

Did he even realize the risks?

The level of stupidity has gotten everyone talking...

Well, all we can say from this situation is that Herbert will definitely be learning a lesson from this foolish mistake...

Because if he doesn't, he's definitely going to be branded as a first-class idiot!

Keep on reading to find out about the lottery winner who was forced to split his $30 million winnings with his ex-wife...