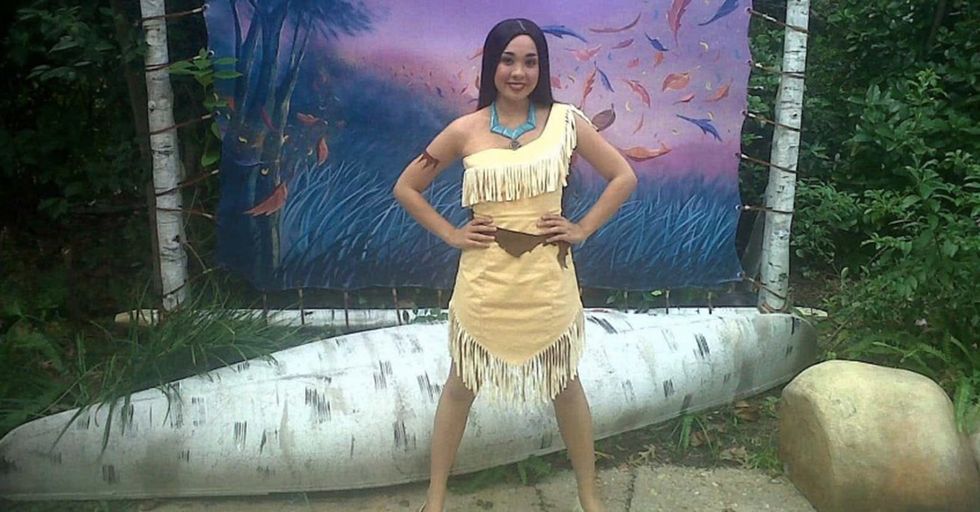 A girl who recently portrayed Disney princesses such as Mulan, Pocahontas, and Silvermist took to Reddit to share with the world her experience working at Disney World. Unsurprisingly, she pulled the curtain back on "the Happiest Place on Earth."

Take a look at what she had to say.

The actors need to learn the signature of every character they portray. In fact, the actress said that she signed so many autographs that she would sometimes sign the wrong name outside of work!

via: The Mom Creative

It turns out (and this might not be a huge surprise) that a lot of the Disney princes are played by gay actors. Not exactly scandalous, but a few people had asked in the interest of knowing whether or not Disney was aware as a company. They are.

They have to lie to keep up the illusion! She says, "Chinese people would always tell me to speak Chinese & I'd tell them that I bet Mushu if I could go an entire day without speaking Chinese he'd feed the chickens for me tomorrow."

Yeah, she got hit on, especially while wearing the skimpier outfits.

"I was hit on as Pocahontas more than Mulan or Silvermist, & it definitely has to do with the amount of clothing she's wearing. I've never been touched inappropriately, but there's always the family that makes the grandpa or the dad get a picture alone & they'd whisper how pretty I was or ask when I got off of work. I'd get slipped the occasional phone number on a napkin, but nothing ridiculous has ever happened."

Training for these roles is no joke. Read the process below!

You have two days of training per face character you're given. Day 1 is watching the movie, learning how to walk, talk, & act, & day 2 is meet & greets with guests. I think there may be an additional day for accents ex. Alice in Wonderland & Mary Poppins, but none of my three face roles had any accents, so i'm not sure.

There are people who are face trainers, who monitor you during training. After you are approved, you are expected to maintain your training & uphold character integrity during meet & greets. You have character attendants who are in charge of your lines & dealing with guests during your meet & greets, but there isn't someone watching you every meet & greet to see if you're always acting like your character."

But sometimes the job rocks, and it's all worthwhile!

If you're a prankster, then you're probably going to want to get the role of Chip or Dale!

"Chip & Dale are the most fun, because all they do is troll people all day. Steal a water bottle? everybody laughs. Sit in a stroller? Hilarious. Pretend to punch your character attendant in the testicles? BOY DO THEY LAUGH. They're so fun & people love them!"

Behind the scenes, it's gossip-y and clique-y, just like high school.

"When I worked there, I would go to the cafeteria & people would stare at me & not talk to me. Those people then would tell their friends I didn't say hi to them & that I wasn't friendly, but those people didn't make an effort to talk to me either," she said.

"That's how I think the whole 'all of the princesses are bitches' thing gets around."

You're not seeing things...There are multiple versions of the same character around the park at a given time.

"It's a very cool operation. I haven't been at Disney since 2012, & a lot has changed since then. But if you think about it, Cinderella is in the Parade, doing breakfast, lunch, & dinner rotation at Cinderella's castle, & she is in the princess room. At Epcot she is at the Norway breakfast. She's also in the night time parade. She's also in the main stage show at Magic Kingdom. That's at least ten girls who are Cinderella in one day.

It's awesome to think about the fact that you never see two together. It's very cool, & very well planned."

Prince Charming turned out to be a little less than charming in real life.

When asked if she ever had a run-in with the fabled character, the actress replied simply, "He hit me with his purse once."

It might be catty backstage, but it can also be pretty funny.

"One time in the break room I saw Cinderella & Snow White fit comfortably under Tiana's dress & when Belle came around the corner they popped out & scared her."

And even when they're at Disney World, kids will be...kids.

"Mulan did you know Ariel & Prince Eric had sex to make Melody."

The actors gets asked enough of the same questions that they have lines prepared for the regular questions.

"People ask very similar questions throughout the day. & when you do 5+ hours a day of talking to guests for 5-7 days a week, you have your quick little one-liners ready." To read the whole AMA on Reddit, check it out right here.