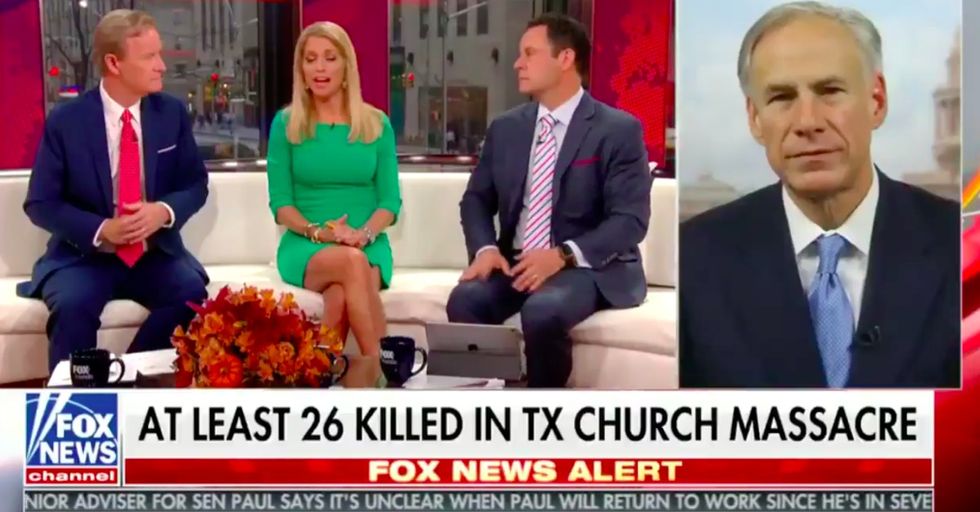 On Sunday, former US Air Force airman Devin Patrick Kelley opened fire in the First Baptist Church of Sutherland Springs, Texas, killing 26 and injuring 20. Kelley, who had been discharged from the Air Force for assaulting his wife and beating his infant stepson so hard he partially crushed his skull, had a history of violent behavior and was allegedly targeting his mother-in-law, who was not at the church at the time.

There have been many different responses to the shooting, each with varying degrees of appropriateness. Donald Trump said the shooting is about "mental health."

During a news conference in Tokyo, which he is currently visiting as part of his Asian tour, Trump said, "mental health is your problem here." He also called the shooter a "very deranged individual" with "a lot of problems over a long period of time." Asked whether he would consider gun control, the president added, "it's a little bit too soon." He concluded, "It's a very, very sad event. These are great people."

Other politicians' responses were much more traditional.

Reports out of Texas are devastating. The people of Sutherland Springs need our prayers right now.
— Paul Ryan (@Paul Ryan)1509913249.0

A few politicians, however, called out their colleagues for their hypocrisy.

They were in a church that was full of prayers. They need a government who will enact common sense gun laws.… https://t.co/6BmThtiVER
— rosanne cash (@rosanne cash)1509920955.0

Senator Chris Murphy of Connecticut railed against the political cowardice of deferring to the NRA with the rising death toll in America. "Can you sleep tonight, colleagues, when the price of gun lobby goodwill is this - blood soaked church and school floors, city streets?" Murphy tweeted.

No response, however, came close to Fox News' Ainsley Earhardt.

.@ainsleyearhardt's silver lining to #TexasChurchMassacre. "There's no other place we would want to go than church… https://t.co/ZDXBunS15n
— Aaron Rupar (@Aaron Rupar)1509988604.0

During an interview with Texas Governor Greg Abbott on Monday morning, Earhardt gave her own thoughts on the Texas massacre. “We’ve been reporting this shouldn’t happen in a church," Earhardt said. “But I was downstairs talking with some people that work here that we all talk about our faith and we share the same beliefs. We were saying there’s no other place we would want to go other than church." “Because I’m there asking for forgiveness. I feel very close to Christ when I’m there. So, I’m trying to look at some positives here and know that those people are with the Lord now and experiencing eternity and no more suffering, no more sadness anymore."

People could not believe their ears.

Half of the victims of the Texas massacre were children. One was a pregnant mother. One family lost three generations. One was just 18-months old. But it was better that they'd "died in church," according to Eardhardt.

I can think of many places I'd rather get shot to death than a church, @ainsleyearhardt. https://t.co/h9CLfzUhds

Good Lord. And not a word about how this shouldn't have happened at all, let alone in a church. I just ... https://t.co/QHgjJnih8C

'Actually church is a great place to get shot' is downright dystopian framing that sounds like a ridiculous parody.https://t.co/ylOd19VXDv

I really can't find the proper words to express my utter contempt for Fox & Friends. Actually the whole damn network...

That 18-month old was ready for the after-life!

Does she think temples & mosques are also sacred?

And is that supposed to be comforting? WTF is wrong with these people. I just can't!

WTF is this?? A 16th century morality play?

I couldn’t believe my own ears. There’s something on the couch that makes them more stupid than they were to begin with? @ainsleyearhardt

So I guess I’ll die at THE CHEESECAKE FACTORY. pic.twitter.com/tfOEelIFDB

The movies? The mall? A nightclub?

No other place? Maybe bite your tongue the next time you want to weigh in on a mass shooting that left 26 dead and 20 injured.