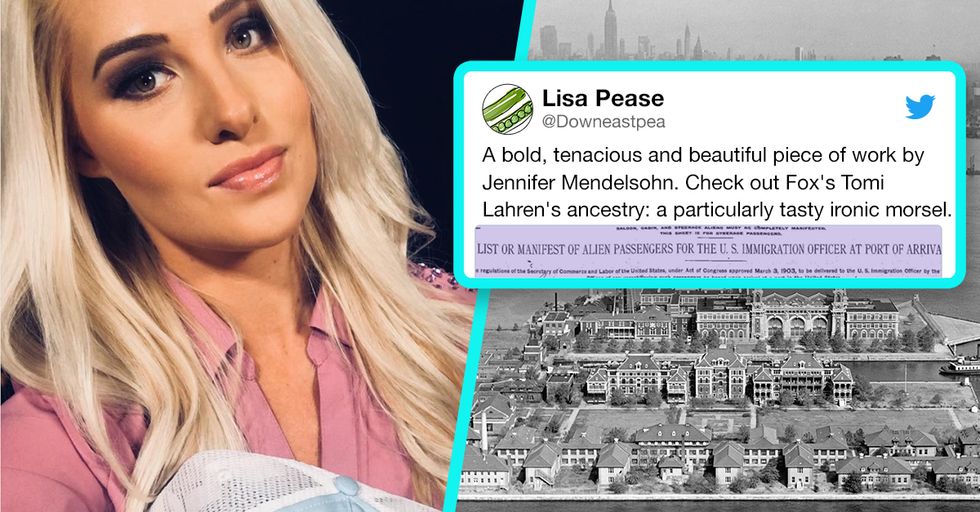 A Genealogist Told Tomi Lahren That Her Immigrant Ancestors Were Criminals

The debate around immigration has been very contentious lately. With the repeal of Deferred Action for Childhood Arrivals program — also called DACA , and the lack of a political consensus over how to address the subject of DREAMers, the immigrants who came to America when they were only children, it seems that the immigration debate grows more and more virulent every day.

Adding fuel to the debate is Donald Trump, who famously ascended to the presidency based on – among other things – the disingenuous claim that he would build a wall and "make Mexico pay for it."
Trump has voiced his regret about ending DACA. "I do not favor punishing children, most of whom are now adults, for the actions of their parents," he said in a statement. "But we must also recognize that we are nation of opportunity because we are a nation of laws."
However, very few people actually believe his words, considering the President has consistently espoused the most grossly racist and xenophobic sentiments.
He called black and brown countries sh*tholes (and then lied that he didn't), referred to Mexicans as rapists and criminals, routinely bashed African Americans, left Jews out of a Holocaust remembrance, and, of course, called white supremacists "very fine people."

At least four members of the Trump administration had immigrant ancestors who the Trump's proposal on "chain migrat… https://t.co/GYCszsdJhC
— Philip Bump (@Philip Bump)1517260360.0

It's no wonder that people have been emboldened to spout the most virulently anti-immigration sentiments they can. One person, however, has begun to call them out on it in the most innovative way.

Jennifer Mendelsohn is a journalist, author and genealogist, and she's been using her expertise to confront people's racist ideas about immigrants with their  public family history.

She has named her work #resistancegenealogy, and she  recently spoke to CNN about it. "I think the first person I worked on was Steve King," she said, referring to the Iowa congressman who opined, "you cannot rebuild civilization with somebody else's babies."

"I kept thinking, 'This is ridiculous. How do these people think they have a leg to stand on, looking down on immigrants when so many American people have an immigration story in their history?"
Mendelsohn quickly delved into King's public records, and discovered that the congressman's grandmother and her two young siblings arrived at Ellis Island in 1894. She was only four years old at the time. (In other words, a Dreamer.)

Mendelsohn also did the same for Fox News contributor Tomi Lahren, who railed against Dreamers and their families, criticizing them for not being "law-abiding citizens."

Ironically, Lahren's own great-grandfather was indicted for forging naturalization papers. (In other words, he was an illegal alien.)

Mendelsohn said she wasn't trying to shame people with their history, only show them "how universal immigration is in so many American stories. Some people who've been in the country longer, it may not feel that close and it's easy for them to forget."
"So many people today are sort of looking askance at the next wave of immigrants and pearl-clutching, trying to put limits on them and what they may contribute to modern society," Mendelsohn said. "And I just laugh at that, because the same exact things were said about their ancestors 100 years ago,"

Mendelsohn also gave Dan Scavino, the White House Director of Social Media, the #resistancegeneology treatment. When he spoke out about chain migration, Mendelsohn gifted him with the proof that this was how his family immigrated.

She wasn't done there, however. She also reminded him that the racist way many people of his persuasion speak about immigrants today is the same way they did about his own ancestors.

Perhaps Dan Scavino needs a reminder of how well-thought-of Italian immigrants like his great-grandfather were.#whatgoesaroundcomesaround#resistancegenealogy pic.twitter.com/XWP6fJUfjT