A Girl Called Her Ex a 'Friend' On Twitter...He Responded With the REAL Story | 22 Words 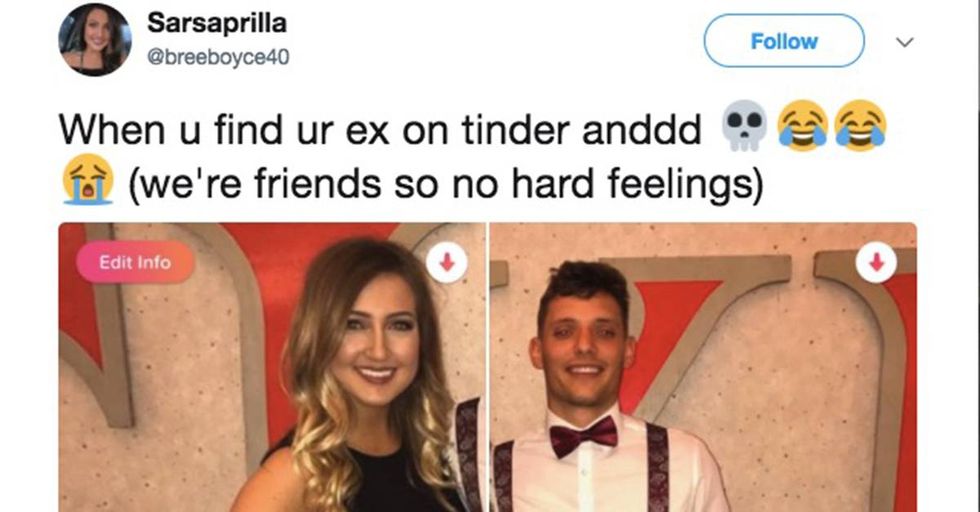 A Girl Called Her Ex a 'Friend' On Twitter...He Responded With the REAL Story

When you only post your side of the story on social media, don't be surprised if word gets around and others share their accounts.

It happened to this girl, and it wasn't pretty.

Especially if you think you're relatively good looking. It's a good idea, in theory, just put a profile of yourself up and see who is interested.

And that brings us to Brianna.

She seems like your average 20-something in most respects, including the fact that she is on Tinder.

Briana was dating a boy named Adrian, and at some point they broke up and parted ways.

It happens, especially among younger couples. But their story didn't end there. In fact, it was just getting started.

Brianna was scrolling through Tinder and happened upon a familiar face on the dating app.

No hard feelings, right? "Onward and upward" and such?

Some friends responded to the tweet asking how she could let go of such a hottie.

But it turns out someone pretty important to this story saw her tweet, and he delivered an absolutely brutal response.

The ex-boyfriend, Adrian, saw her tweet and disagreed with Brianna's characterization of their relationship.

Uh, big time. That didn't go like Brianna had hoped at all!

Adrian has NO CHILL.

Adrian has a level 100 in savagery. Brutal.

Maybe he's got a new chance at love!

I'm not sure I completely buy this statement, but she's clearly interested!

Most people are just utterly taken aback by the level of savagery Adrian displayed. (Even if Brianna deserved it.)

With Adrian's brutal response, people were quick bust out the "OH SNAP!"s

Any word from Brianna on the matter?

Sadly, not yet. But others were VERY quick to offer their postmortems on the brutal exchange.

This one sorta says it all without saying a word.

Not everybody was on his side though.

Some said that Brianna's post did nothing to deserve that, but she did tweet about him like they were friends. He was simply setting the record straight.

Some thought he was out of line in his response.

I gotta say, I think he was in the right. He was quiet right until she called him a friend. If someone who burned me did that, I'd have a hard time staying silent.

Plus, even if he was a little bit harsh, it was hilarious. And that counts for something, right?

To Brianna's credit (kinda?), she's left the tweet up, despite the fact she's getting hammered for it.

Maybe they can meet for coffee and work this out. Just kidding. They should avoid each other like the plague. And stop following each other on Twitter.