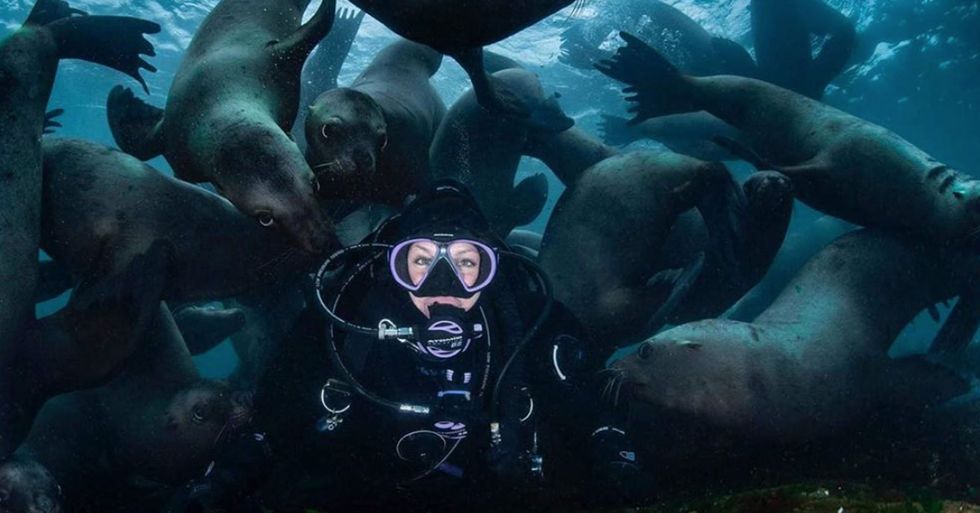 And just to add an extra little bit of adorableness to an already adorable pot, check out the amazing photo of a bunch of sea lions photobombing a diver's selfie as well as other instances of these rare moments.

This seal looks terribly happy to be photobombing these penguins!

A cute couple picture is nothing without a chipmunk, is it?

That is not a flattering angle.

Now, this is probably the scariest photobomb I've ever seen. However, everyone around the 3 girls seems to be enjoying the sight.

I knew giraffe's had tongues, but I never thought they looked like that...

This emu must have been feeling himself to be so close and personal with the camera.

This is probably the smiliest horse in the world.

Who knew cats could fly? This photo is evidence.

I don't know what kind of fish this is, but it's actually pretty cute, don't you think?

This is the most adorable family photo ever.

What do you do when a llama decides it's a better view then the actual view?

Llamas seem to be the biggest culprits when it comes to photobombing, but we're here for it because they're so darn cute!

I rest my case.

And now for the main event...

A bunch of cute-ass sea lions decided they were going to photobomb a scuba diver just off of Vancouver Island, Canada.

He said: "The most surprising thing about the footage was just the sheer feeling of being in that situation with all these animals outnumbering you."

"This part of British Columbia is unique as I can’t think of any other ecosystem in the world where wild animals will interact with you on such a large scale, without being prompted with bait or food or anything else to entice them."

He admitted they also "nibbled" on him.

"It really is amazing, they will just flock to you. They just want to play. They’re just kind of fooling around while we are in the water. And they are so amazing with you. It is like sitting in a ball pit full of puppies." How amazing! If you want to see more cool photos of a photogenic squirrel, then keep scrolling...