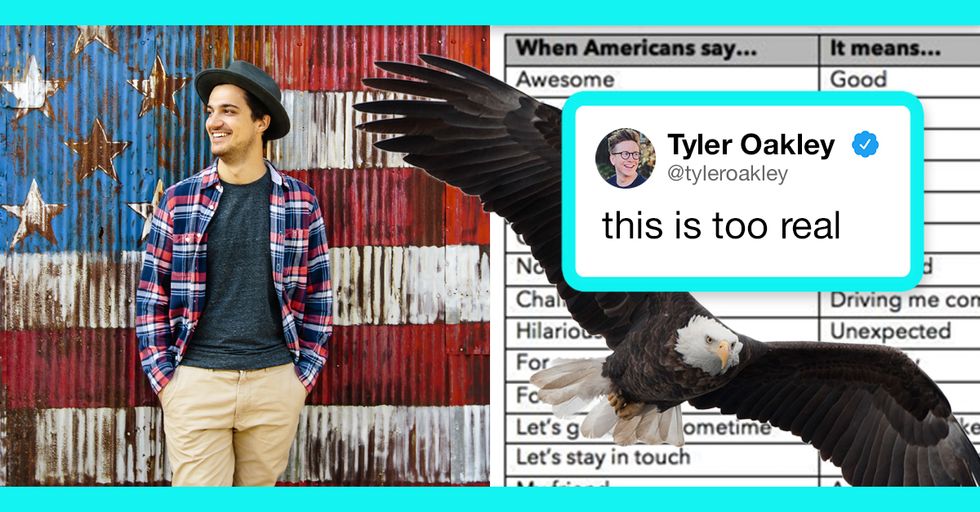 Do you speak American?

Serious question. Many a hapless English-speaking foreigner has landed upon this majestic land of McDonalds and Star Wars-shaped waffles, confident in their ability to communicate with the natives, only to be confounded by one teeny-tiny problem.

They don't, in fact, speak American.

What is American, you ask? Well, it depends on where you are. You see, our great country, while unified in many ways (such as our peculiar insistence in driving on the right side of the road and our inability to enjoy Guinness, the king of beers) is divided in others. Namely, regions and states.

The South is not the same thing as the West, which, in turn, is not the same thing as the midwest. And nobody in their right mind can confuse Florida with Georgia, or Georgia with Louisiana.
Each region and state have their own distinctive people and cultures, and, of course, their own distinctive parlance. For instance, you can spot a Southerner at twelve paces through their distinctive use of the drawled "y'all", while a Californian is likely to refer to you with the gender-neutral "guy" or "dude".
The point is, American is a shifting, amorphous language that depends on where in the country you are, and what time period you are, because (as you will no doubt recall) very few people employ the words "righteous," "psychedelic," or "tubular," as slang anymore, unless they are in fact referring to something that is "righteous," "psychedelic," or "tubular" in nature.
And this is another headache for the foreigner attempting to understand American. A large portion of American words and sayings don't in fact mean what you think they mean. They may seem like plain English, but they're another thing altogether. Now, one brilliant Twitter user has finally decoded American once and for all. Okay, maybe for the next year or so, because, you know, things might not be on fleek then.
On Wednesday, Twitter user Tyler Oakley posted a chart on Twitter detailing what Americans said versus what they actually meant. It was something of a revelation – but, it was also what we'd known forever. Americans literally never say what they mean.

For instance, the words "awesome", "fabulous" and "amazing" all mean "good", but "fine" and "okay" mean "bad". This, of course, tells us that the American fondness for hyperbole is still in effect.

@tyleroakley this is why understanding american people is hard sometimes
— ciara (@ciara)1515019615.0

Also fascinating was the American usage of the phrases, "let's get coffee sometime" (goodbye, I like you) and "let's stay in touch" (goodbye, I don't like you).

Herein lay a great cultural difference. For more straightforward cultures, the "let's get coffee sometime" or "stay in touch" literally means that, and when the American flippantly Americans, as Americans will do, the confused foreigner is left in the lurch.

So American is definitely confusing to some foreigners, but we would argue we should really lean into it. You know how people always say they can't understand Australians? Perhaps when we Americans go to Australia – or any other English speaking country – we should unleash upon the unsuspecting natives our deepest, most elegant American patois. "We're fitting' ta go in on these pork rinds – savagely. K, peace out now, byyyye!"