A Guy Sent This Shocking Picture of His Girlfriend to His Mom, and Now The Internet's Trying to Cover for Him | 22 Words 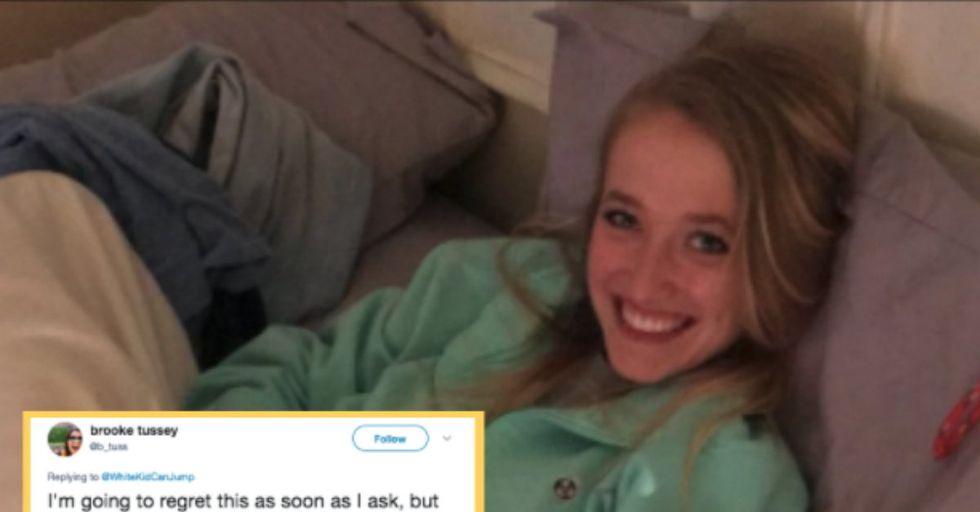 A Guy Sent This Shocking Picture of His Girlfriend to His Mom, and Now The Internet's Trying to Cover for Him

Your parents have been through a lot.

Think about it. There's the whole childbirth thing, which is obviously no picnic, but it doesn't stop there. Dirty diapers, broken bones, temper tantrums, and paying for whatever after-school activities you insisted on participating in — it's a lot to handle. Maybe they deserve a break.

We know Maison Vallance's mom sure does. Especially after the photo he sent her of his girlfriend.

This is Maison and his girlfriend Meghan.

Maison is 22 years old and lives in Tennessee. According to BuzzFeed News, he and Meghan met in a bar and have been dating for about two months. Hooray for love!

Things seem to be going great.

They're all smiles and seem to have all kinds of adventures together. Even in the bedroom! How do we know that? Funny you should ask.

Recently, Maison's mom asked him if she could borrow a shirt she had given him (it has the family last name on it). He found it and sent his mom the following picture to his mom of Meghan holding said shirt:

After taking the picture, he decided Meghan looked "too pretty not to post it" on Twitter, too. So that's just what he did.

And that's when Twitter noticed something very interesting about the photo.

One of his followers asked him about the ropes. The ropes?!

Yep. In case you missed it, there are ropes tied to the headboard above Meghan.

We can only assume they're for *ahem* personal use. Maison's Twitter followers obviously found the whole thing hilarious, but then they quickly stepped up to provide Maison with excuses for why he has ropes on his bed.

We really love this one:

Nothing is going to impress your mom more than a girlfriend who is also a paratrooper. That's such an impressive skill to have and is in no way embarrassing!

Or maybe the ropes could function as a clothesline.

Everyone knows that every clothesline has loops on the end that are perfectly sized to hold someone's wrist. Just in case there's no tree nearby to hang it on.

This is probably the best answer:

If you use this one, your mom is sure to be impressed by both your DIY attitude and your knowledge of history.

For his part, Maison didn't seem to be too shaken up by the accidental detail in the photo he sent to his mom.

In fact, he even encouraged Twitter to spice things up in their own bedrooms. You know, with clotheslines. For your clothes.

And apparently, it could have gone much worse.

You know what? Good for you guys, Maison and Meghan. We're not here to yuck any yums. Just...maybe spare your mom from having to think about your bedroom activities, you know? After all, she's been through a lot.