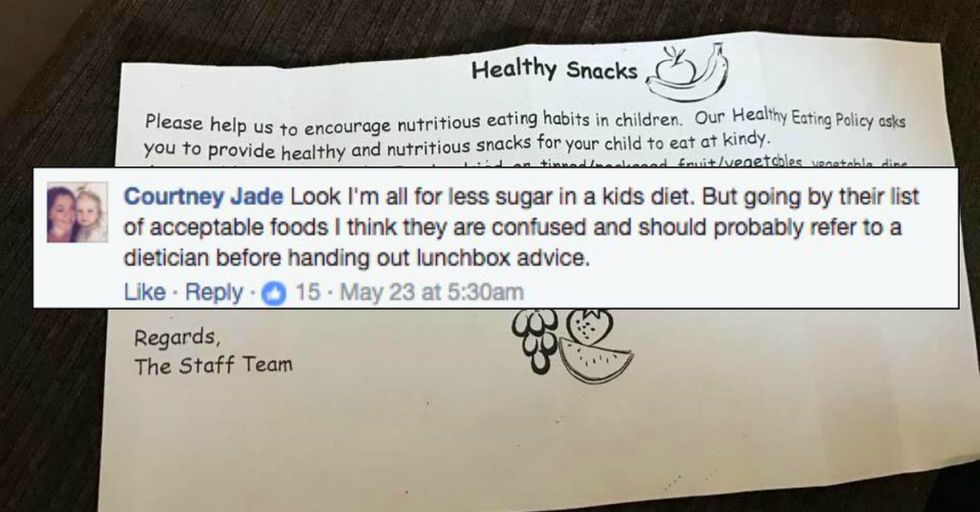 Kindergarten Mom Scolded For Her Packing Her Child This 'Unacceptable' Snack

Most parents would probably agree that their children should eat a healthy diet and everything in moderation. But what happens when the school steps in and essentially dictates what you can pack in their lunchbags, even if you feel that it's a healthy choice?

That was the case for a mom in Australia who was sent this note home with her kindergartener for having packed sultanas in her lunch.

A friend of the mom in question posted the note on a Facebook group called Oh So Busy Mom, and it quickly went viral.

School officials specifically noted that "the sultanas packed for your child today is unacceptable at kindy due to its high sugar content."

Which is a little bit weird, because if you know what a sultana is, then you'd hardly find it amiss in a child's lunch.

In case you are unfamiliar with sultanas...

They're just raisins made from white seedless grapes.

Most schools would be pretty damn thrilled to see their students eating raisins instead of candy or something else.

But apparently, sultanas are "unacceptable" for Kindergarten!

If you think that's a little bit weird, you aren't alone.

When shared on Facebook, other parents were equally shocked, and even pointed out the irony that dried fruit was among the list of "acceptable" snacks on the note.

Maybe you don't want your child to go to that school anyway since reading comprehension doesn't seem to be their strong suit.

Everyone seemed to agree that the school didn't really know what it was talking about.

But what I really want to know, who is the person that actually reported the child for having raisins in their lunch?

You would have to pay most kids to eat raisins in their lunch. They aren't exactly a "delicacy" among kids.

And even if they have a moderately high sugar content, it's mostly natural sugars.

And people were quick to point that out.

Can't say we've heard of too many kids getting sugar high off of raisins.

Some people appreciated the effort that the school put in.

But hardly seems like a defendable action. Eventually, an actual dietician weighed in and laid the ultimate smackdown on the school.

Kathryn Hawkins, a dietitian and mom, came to the parent's defense over this lunch shaming with a passionate Facebook post.

She laid down the science and noted that while sultanas may contain natural sugars, they're also high in fiber and several vitamins. (Which is more than you can say for other sugary snacks.)

And again, parents could have agreed more:

It's hardly like children around the world are clamoring for raisins.

Others pointed out yet another flaw in the school's logic.

Yogurt was on the list of acceptable snacks, but yogurt typically has a far higher sugar content than sultanas or raisins.

Clearly logical thinking is not this school's strong suit.

This could turn out to be a blessing in disguise for that family; now they know this isn't the ideal school for them. Or for anyone that likes fruit, apparently.

What would you have done if your child had been sent home with that note?

They should send their kid to school with sultanas every single day for the rest of the year, just to spite 'em.