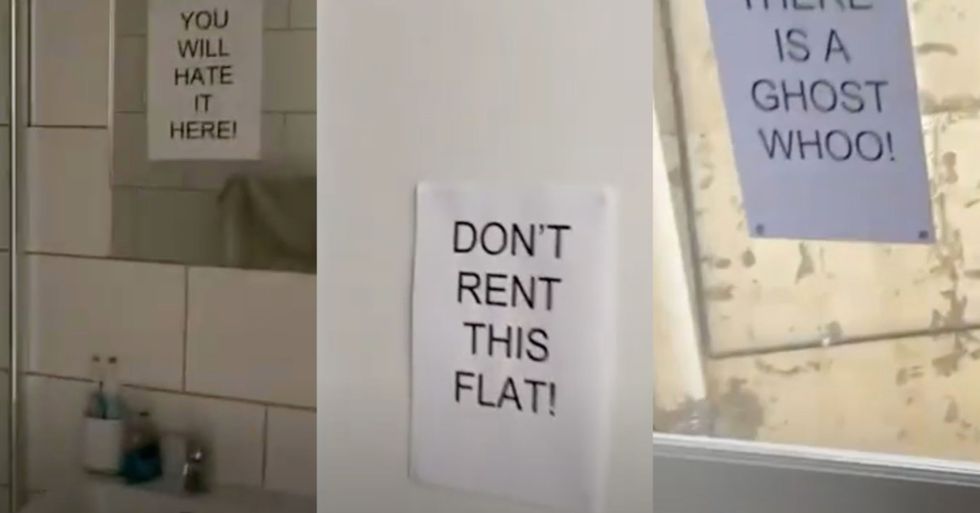 Landlords have a pretty tough job. They deal with loud parties, late rent, smelly tenants, and giant holes in the wall from who knows what.

But sometimes, it's the landlords that cause all the problems. A video on twitter has gone viral after one tenant revealed what he'd done to the house after his landlord forced him out...

Being a landlord is not an easy job.

Landlords are often seen as the bad guy, always ruining a good time or getting frustrated with their tenants. And why do they keep bugging me about rent every single month?!

Some landlords on Reddit decided to share their weirdest experiences and they did not hold back on the good, the bad, and the very, very ugly....

It's really not all fun and games, but sometimes the landlords <em>are</em> the problem, as one guy on Twitter revealed to the world. What he did to the place is beyond words...

My neighbours rented their place. They decided to do some reno(vation)s without notifying the landlord. He's a cool dude, and I don't think he would have minded too much, but these were serious renos. My neighbors knocked out a wall, added a patio, before rupturing a pipe. That's when we found out they had hired friends to do all the work and were "fixing" the house with plywood they got from the dump. The space between the patio and the back wall included a 75 cm gap, which they said just to jump over. They have three-year-old twins.
-Spontanemoose

My favorite was the guy who got his apartment inspected after reports were made of smoke coming from inside. The landlord walked in and saw no furniture anywhere. There were tons of little contained fires with kindling and newspaper all over the place. Apparently, the tenant had been performing strange religious rituals and was convinced demons were after him. -cowtown456

The king of trash.

...He had been stacking trash in every room to the ceiling. You couldn't even get the bathroom door open because of the trash bags stuffed in there. Rats had built a huge nest in a few places and chewed holes through the floor as a fast way to get out. I always remember going into the bedroom and seeing the bed, you could see where he slept because there was a slim space on his bed where he curled up to sleep and trash covered the other side. -

Mice were the least of their problems.

The main bedroom was just a mattress on the floor and a dresser with food, drug items, and dirty clothes everywhere. They went as far as to stick yogurt lids to the walls and write nazi symbols everywhere. The second bedroom, which looked to be the infant and toddlers room was filled with more dirty diapers and cigarette butts in the crib... They also had drug paraphernalia everywhere. Pot plans in the closets, dirty needles and little empty pouches of who knows what. Both sinks in the house were clogged and unusable, the toilet had sh*t all around it and we found several mice living all through the house.
-FuzzyAthena

We had one tenant that burnt out a car, you could see where the asphalt had melted for years. The same guy had put about 40 holes in the walls. From the sounds of it, there were a lot of domestics. I found blood splattered on the wall. They dumped a whole bunch of their clothes and other rubbish under the house, left some furniture and appliances as well. That was fun to clean up. -meadowlarked

My grandpa had a tenant who ran a prostitution ring (more like escorts as it was in a very upper-class neighborhood) and she was arrested and he was never notified until the rent wasn't paid. -OhNoADystopia

My dad bought a new house for us and rented out our old home. He rented it to a lady with several kids. She was late on rent and my dad let it slide a few times. Finally, it got to the point where she needed to leave. She had stopped paying rent altogether. When she was finally evicted, she made sure to leave hamburger meat in all the vents in the house. -Cotton_Candy_Grapes

A condo full of cockroaches.

A whole family with 4-5 kids moved in and for a while, no one said anything about them, but after a few weeks, other people living in the building started saying they were being disruptive and all. So the landlord went to go check on them to tell them about complaints, and when they opened the door they saw so much garbage absolutely everywhere like an insane amount and cockroaches everywhere. So after seeing that they immediately told them to get their act together in a week or their outta there. They didn’t clean up so they moved out and when they went to clean the apartment there were cockroaches in every possible crevice.  -SneakyTurtlez_

The most random room ever.

From what I remember of what I was told, there were four adults and I think 3 or 4 kids that use to live there...There were random broken instruments, like a guitar and an electric organ. Moldy food in the fridge. We found a hookah in one room that was kinda cool and some cool pokemon cards. That was one of the grossest places I ever went to. -Abucrit20

While some tenants unjustifiably make their landlord's life hell, sometimes, just sometimes, it's worth it.

Sandy Batchelor has gone viral after he received an eviction notice from his landlord, but before he was forced out of the property, they had the gall to ask him to film a video of the flat... As you can imagine, it didn't go down too well with Sandy...

There’s pretty much a universal understanding that most landlords aren't the nicest of people...

And if this video is anything to go by, then they're totally right...

Not really sure why the landlord thought this would be a good idea.

But the video made by Sandy was presumably meant to go to the new potential residents. Was being the operative word...

Obviously the current tenant wasn’t going to do this to a good standard, because... well let's face it, would you?

As bad as the landlord might have been, I doubt anyone could have predicted that the results would be this spectacular.

The house was littered with special messages for the new tenants.

And Sandy made it clear that everything he owned was coming with him. Everything...

While it is hilarious, it also highlights how awful landlords can be to those who live in their properties.

Hopefully some of them take a look at this and realise that this isn’t how they should be acting, especially during a global pandemic.

Our letting agent asked us to make a video of the flat we are basically being forced out of. I wish them the very b… https://t.co/GzsBJEEGOK
— Sandy Batchelor (@Sandy Batchelor)1589728355.0

While we're kind of sad he's been forced out, he has apparently been letting off a friend at a much cheaper price! Keep scrolling to see why this influencer, known for her lavish lifestyle, was shamed by her landlord... The pictures are disgusting.