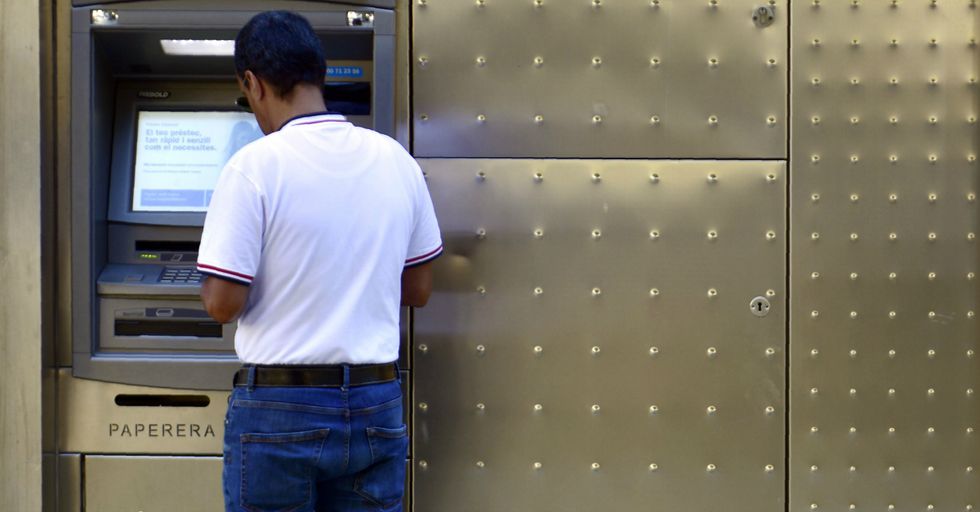 There's no arguing that our culture is one of convenience. From cars to smartphones to social media ads, it feels like everything is a race to see who can deliver results quicker, faster, and more efficiently. We've come to expect things right now, and companies bend over backwards to make it so.

But when we're forced to wait and no one listens? Things tend to get interesting.

Mild technological inconveniences, for the most part, are usually shrugged off. Phones glitch and laptops occasionally run slower than we want them to. When a problem involves money, however, some people go to great lengths to remedy the situation. One man recently proved that he falls staunchly in the latter category.

Most days, technology is our BFF.

We've gotten to a point where super-fast phones can do everything from store thousands of songs to record high-quality videos and immediately share them with the world. Computers can make entire movies, run businesses, and turn anyone into a podcasting star. As far as technology's concerned, we're digging the perks of it.

But it does come with its drawbacks.

Because we rely so heavily on technology, it's irritating when things go off the rails. Almost everyone can relate to staring blankly at a website that never seems to load or wondering why the heck our phone dropped a super important call to our insurance agent. It can be beyond maddening.

Most of us let it go. No sense in raising the old blood pressure.

Sure, having the GPS in the car crap out is annoying, but most of us just shrug it off and wait it out. Things have a tendency to come back online, so blowing your top isn't really warranted in most cases. And often there's an explanation for such malfunctions. Maybe we missed an update? Or possibly aliens invaded and blocked all the satellite signals on Earth. Either way, it'll be OK eventually.

And for those times when we can't let a tech snafu go, looking for help is usually the next step in our game plan.

When something sorely needed in everyday life stops working, it may be time to call in some favors. Usually, that takes us through the painstaking process of contacting tech support, or slogging through an arduous customer service call. Still, if help is available, we're willing to do whatever it takes.

But sometimes we don't get the help we need, and it's time to resort to more drastic measures.

If you're put on hold without an answer, or customer service flat-out refuses to help, then what do you do? Depending on how important it is to get the item in question fixed in a timely manner, we can come up with some pretty interesting ideas. You could try to fix whatever it is yourself — or you could go the extra mile, and stage a very public stunt in an attempt to get a company's attention.

The person who secured this fish was clearly frustrated. Well, frustrated and creative. @scottdancooper posted this tweet because of the admirable efficiency and interesting nature of the cry for help. While he didn't do the fish-taping himself, he brought it tons of attention and made that morose mackerel an internet star.

It's tough to say, but signs point to the Facebook parody account "Troy Buswell," a joke profile centered around the now-retired, controversial Australian politician. Whoever runs the account put the photo up to poke fun at it and the Buswell. But whether he's the real taper of the fish is up for debate.

Because there's another fish-taper in town.

A quick search on "fish-tapers" reveals Matt Starr, an energetic piscatorial planter. His idea was to tape live fish to Wells Fargo ATMs as an act of protest against the banking goliath. A number of Wells Fargo employees had been involved in creating fake accounts for customers in order to embezzle money, thereby ruining their credit in the process. The fish were a way for Starr to tell the bank just what he thought of its corrupt practices. An interesting plan, but not one we're sure holds any water.

No matter who actually taped the fish or took the photo, audiences were highly amused.

Despite the question of origin, social media followers showed nothing but delight at the fishy ATM photo. Some people were confused. Others thought it was the best thing they'd seen all day. Others thought expressing their reaction in meme form was the best option. We agree. This one's pretty darn good.

It brought a community of fishy-humor enthusiasts together.

The original tweet soon became a hub for one long-running fish joke. Puns flooded in, each one trying to outdo the one before it. When there are fish involved, the public's creativity knows no bounds, it seems. There were so many more opportunities for wordplay than even we could've anticipated. It's a whale of a thread.

And there's a practical element that shouldn't be missed here.

One Twitter user decided to forgo adding his own pun, instead pointing out that the fish-placer had done an amazing job of picking out tape. We have to agree. After all, if you're going to bring attention to your cause, you have to make sure your low-tech supplies work properly. Either way, we hope someone addressed the ATM issue eventually. And hit everything up with a Clorox wipe.