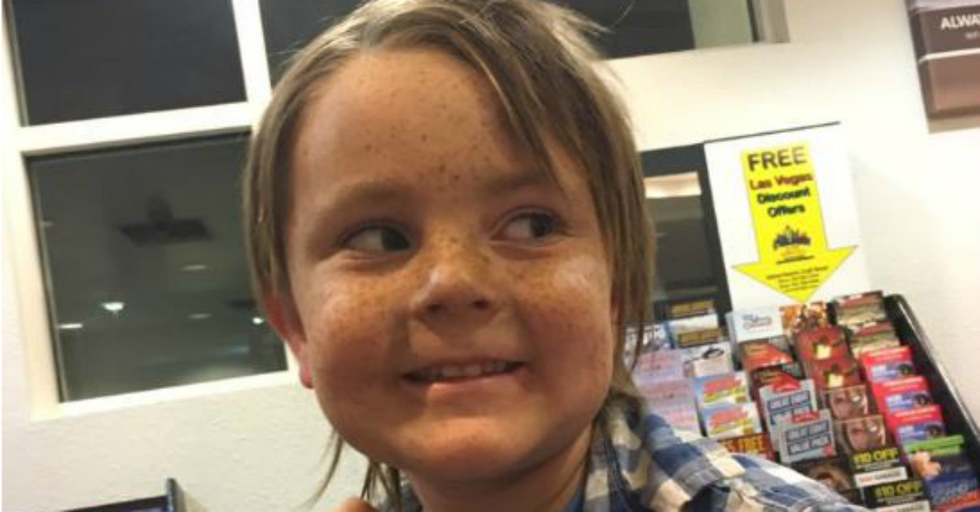 On Sunday, October 1, a lone gunman opened fire on the Route 91 Harvest country music festival. It was the worst mass shooting in American history, and the grieving families will be dealing with the aftermath for years to come.

The shooting caused widespread panic, and many families were separated in the chaos. But thanks to the kindness of strangers, there's one story within this tragedy with a happy ending.

The horrific events of October 1, 2017 will go down in history as the deadliest mass shooting in U.S. history.

With 59 deaths and more than 500 injuries, it shocked the nation and sparked fear in the hearts of Americans who previously felt invincible to this type of senseless violence.

The motive of the gunman, identified as 64-year-old Stephen Paddock, remains a mystery.

Police found 22 rifles and one handgun in the hotel room of the shooter. Paddock's brother spoke to reporters after the shooting about the profound grief and regret he's now dealing with.

"This is what I'll carry for the rest of my life: Had I called him back instead of texting, would I have heard something in his voice? Would he have given up something? I don’t know. I can't say," he said.

"That he would kill people he didn’t know, it just doesn’t make sense. It's just bizarre," he added. "There was something that happened to Steve — I'm not even trying to excuse anything — but something happened that drove him into the pit of hell."

"I don’t understand why Steve got to that point, and maybe we’ll never know."

At 11:21 pm, after breaching the gunman's hotel room with explosives, the police reportedly found Paddock dead from a self-inflicted gunshot wound. Although the shooting itself is over, the pain of the survivors and family members of the deceased will live on forever.

After the shooting, many concert-goers struggled to find their friends and family members that they had been separated from.

This included a five-year-old boy named Aden Huser, who had been watching Jason Aldean perform before the shots rang out. He was attending the concert with his mother and sister, who had left Aden to go to the bathroom just moments before the gunfire. Then...

After running to the merchandise tent to escape the gunfire, Lindsey Rogers, 26, found Aden, alone.

As the crowd came rushing at her, Rogers made a split-second decision that may have saved Aden's life: she was taking him with her. "I was nervous to take him because I knew that his mom would be devastated to find that her child was gone, but in the moment we thought that the best decision was to get as many people as safe as possible. The shots were so sporadic and it wasn’t stopping so we took a chance," Rogers told ABC News. After making it safely to a motel and calling the police, his photo was quickly posted to social media in an effort to reunite him with his mother.

Even amidst the violence and chaos, Aden stayed calm and was able to give his saviors his mother's full name.

"He honestly kept me calm. I didn't want to freak him out so we told him they were fireworks and asked him, 'Who were you with before the fireworks happened?' He didn't seem scared or worried," said Taylor Sutton, one of Roger's friends. While they waited for answers, the Internet quickly sprang into action.

Shares of the photo quickly reached into the hundreds.

Eventually, a family member's phone number was messaged to Sutton on Twitter. "I’m not even sure how it happened. I just know all of a sudden we had a phone number, and we called it and it was his grandpa," Sutton said.

Finally, Aden was reunited with his family at Sunrise Hospital.

"The second time I called and talked to my dad, he answered the phone crying. He said, 'They found Aden, I don't know how he is or anything. I just got a phone call saying your grandson is at Sunrise Hospital,'" said Aden's mother, Doris Huser.

Since she didn't know whether her son was injured or not, the relief she felt when she found out he was unharmed was overwhelming.

She said she felt a huge sense of relief, "something that at one point, I didn't know I was going to have," said Huser. She wasn't able to see her son until the next day morning. And the reunion was emotional...

"His whole face lit up," she said about their reunion. "I dropped to my knees."

"I don’t think we've ever held each other that hard and that tight. We were one for a minute and he just didn't want to let go," she added.

As they drove home, Aden asked his mother a question that she'll never forget.

"Next time, can we all go to the bathroom together?"

"I lost it and I started crying," said Doris. "I said, 'I'll never leave you ever again."

"We will all go together, no matter what, every time,'" Huser told her son. While most stories from the Las Vegas shooting are nowhere near as positive, it's nice to find a rare bright spot during such a dark time.