A Man Is Bringing Historical Photos to Their Original Locations, and We're in Awe | 22 Words 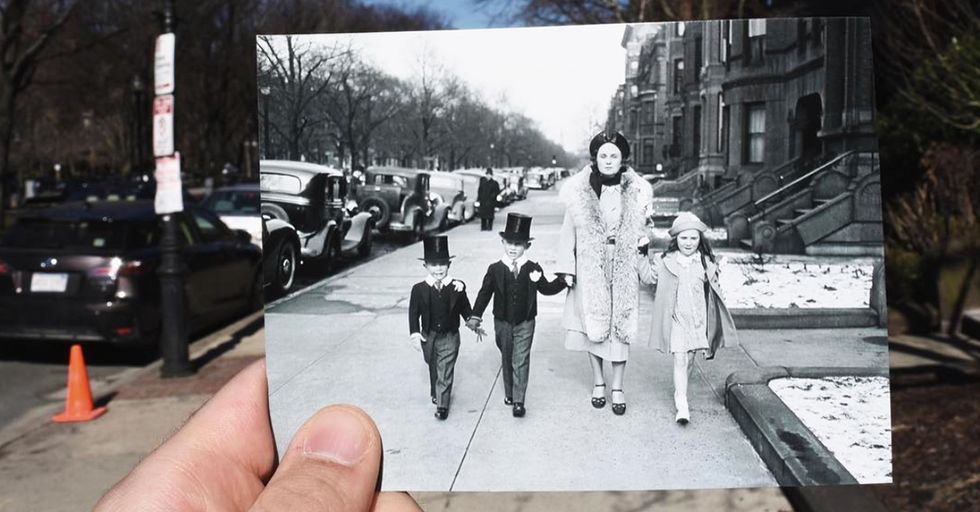 A Man Is Bringing Historical Photos to Their Original Locations, and We're in Awe

Peter Perry is a student in Boston, Massachusetts.

He discovered his new hobby when he started visiting his dad in Germany during the summers.

Perry likes to reprint textbook photos or collect postcards with historical photos on them.

Then, he finds the exact place they were taken and snaps a new image, juxtaposing the scene from the past over the same site today. The effects are totally awesome. Here are some of our favorites.

On this photo, Perry wrote, "Living members of the 54th Massachusetts Regiment the day the Shaw Memorial was unveiled in their honor. The unit, made famous by the movie, Glory, solely consisted of black enlisted men and white officers, and is most known for their brave attack on Fort Wagner."

Perry wrote, "Governor Saltonstall (’39-’45) takes part in a 'ceremonial torching of Hitler' before cutting down a section of the fence outside the Massachusetts State House. During WWII, Bostonians were encouraged to donate any scrap metal towards the war effort, especially their iron fences. "Also notice the State House’s iconic golden dome was repainted dark gray at the time, which prevented the building from being easily seen by enemy planes and ships."

This is a summertime scene from the courtyard of the Boston Public Library (which is absolutely gorgeous), from way back in 1923.

Perry wrote, "Ellison Brown, a Narragansett Native American setting a new Boston Marathon record with a time of 2:28:51. His first win in Boston came in 1936, the same year he represented the U.S. at the Berlin Olympics." The next one features JFK...

This photo is of John F. Kennedy speaking to a crowd of West Germans in 1963.

Yes, that is the legendary band, The Doors, performing in the streets of Germany in the late '60s. Does it get any cooler than that? No, it does not.

A family strolls down Boston's Commonwealth Avenue, an uncommon picture of wealth during the Great Depression of the 1930s.

Perry wrote, "The final picture from my Prague Spring series, which shows two men outside the Czech Radio Building walking towards Soviet tanks. "Around 15 protesters and employees died defending the station, but held off troops long enough for broadcasts about the invasion to reach the rest of the country." The next one might be the most perfectly lined up...

There's so much amazing history at your fingertips in Boston! This picture was taken in the winter of 1941 in the Boston Public Garden. Perry even matched the season when he snapped this photo.

Yes, that is Winston Churchill exiting a brick building in the Beacon Hill neighborhood of Boston, Mount Vernon Street in particular, in 1949.

This picture was taken back in the 1920s when officers on horseback roamed the streets and there were still horse-drawn wagons.

Perry wrote, "Elvis outside the home where he was stationed during his army days in 1959. He would later have the car, a BMW 507 (1 of 252 ever made), repainted from white to red after having to regularly scrub away lipstick marks left by fans."

Perry wrote, "Union veterans of New Bedford in the late 1800s. Fourth from left is William Harvey Carney, born a slave in Virginia and the first African-American recipient of the Medal of Honor." The next one takes us to a historic time in Europe...

Car accidents happened even back then...maybe even more frequently! This photo was taken in 1932.

That right there is a bunch of kilt-clad soldiers in the middle of a German city center. You don't see that every day anymore.

The lesson of these photos is that we've come a long way in a short amount of time. History moves fast, and if you don't pay attention, you might miss it. Share this with the history buff in your life!