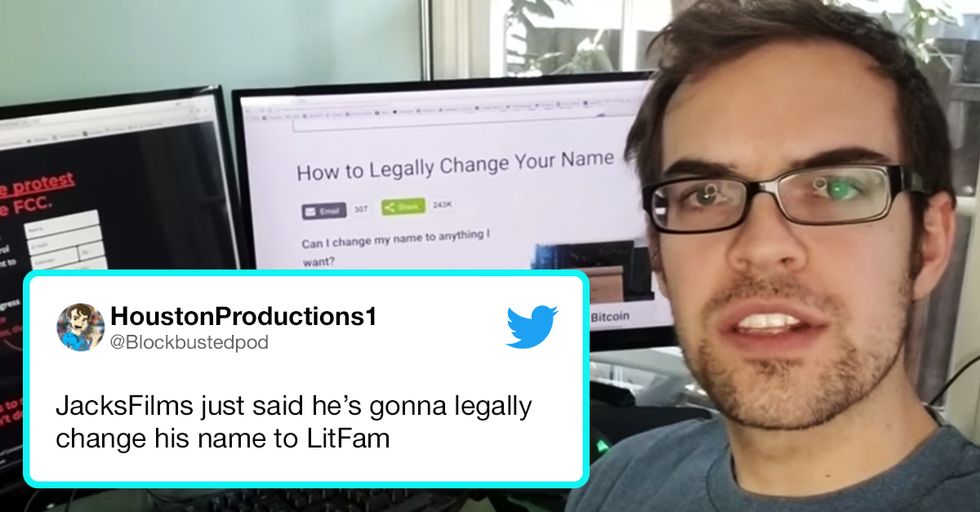 Shakespeare once wrote that "a rose by any other name would smell as sweet," but we can all agree that if roses were actually called "buttholes" you'd be seeing way fewer of them around Valentine's Day. A name is important, whether it belongs to a flower or a human being.

But one human being has decided that his name — Jack — might not be worth keeping. He's promised to change it to LitFam under one very specific circumstance.

OK, fair warning: This is an article about net neutrality.

Please don't close your browser window! We promise that we're not gonna get too in-the-weeds on this issue.
If you ever use the Internet, net neutrality is of the utmost importance to you. Without it, you might have to pay additional money to access websites that you're currently accessing for free.

It'd be similar to how certain TV channels are free, but you have to pay extra for HBO or sports channels.

Except if net neutrality goes away, you'll have to pay extra to access, say, Netflix or 22Words.com (the horror!) Obviously, that'd be super awful.
On the morning of December 14, there was a vote to repeal net neutrality. This would give Internet Service Providers the ability to charge extra for access to "premium" sites.

That's where this guy comes in:

His name is Jack Douglass. At least, that's what his name is for now. He had a lot to say about net neutrality. For some reason, he decided to let the outcome of the net neutrality vote determine whether or not he'd change his name from Jack to LitFam. It started with a tweet...

Douglass posted this tweet saying he'd change his name to LitFam if net neutrality were allowed to remain in place after the vote on December 14.

If #NetNeutrality is somehow preserved after tomorrow's vote, I will legally change my name to Lit Fam. Call, text,… https://t.co/hNIgCP25Ou
— jacksfilms (@jacksfilms)1513184683.0

That is some insane dedication to the cause of keeping net neutrality alive. Of course, a simple tweet wasn't enough.

He also made a video repeating the promise:

Douglass has 3.5 million subscribers on YouTube. This wasn't just some random guy on the Internet shouting into the void about changing his name. Before long, the video was trending on YouTube's front page.

Here's a screenshot zooming in on his computer screen:

As you can see, Douglass went through the trouble of looking up how to change his name. Obviously, the guy means business.
You have to admire someone who's willing to sacrifice his very identity in the name of preserving net neutrality. Imagine waltzing into the DMV and telling them you need a new license with the name "LitFam" on it. No one would ever take you seriously ever again in your life.

But when that vote rolled around, this is what happened:

The FCC voted to repeal net neutrality. This is horrible news if you're a normal person who used the Internet every day. But it was great news for corporations who stand to make a lot of money as a result of this decision. You know, because gigantic, monolithic corporations are hurting for cash. You could even argue that it was slightly good news for Jack Douglass, who now does not have to change his name to LitFam. Here was his response to the vote...

He started with a simple, one-word response.

"whelp" Who knew so much could be communicated by five little letters?

Douglass then said he might just go ahead and change his name anyway.

Since his last-ditch effort to keep net neutrality alive failed so miserably, he might have thought this was the only just punishment. We're not gonna hold him to it, though.

And then he paraphrased Eminem:

Hey, the Internet as we know it, but Eminem is always relevant. You may disagree, but we can't hear you over all of this mom's spaghetti.

So net neutrality may be a thing of the past. But don't despair!

Already, several states have filed lawsuits against the FCC in order to preserve net neutrality. No word yet on whether they're also planning on changing their name to LitFam.

Wondering what you can do?

The vote still has to go through Congress. You can call your representatives and encourage them to pass a Congressional Review Act regarding the decision. Use 5calls.org to get the number and an easy-to-follow script. Or you can change your name. But that probably won't be quite as effective.