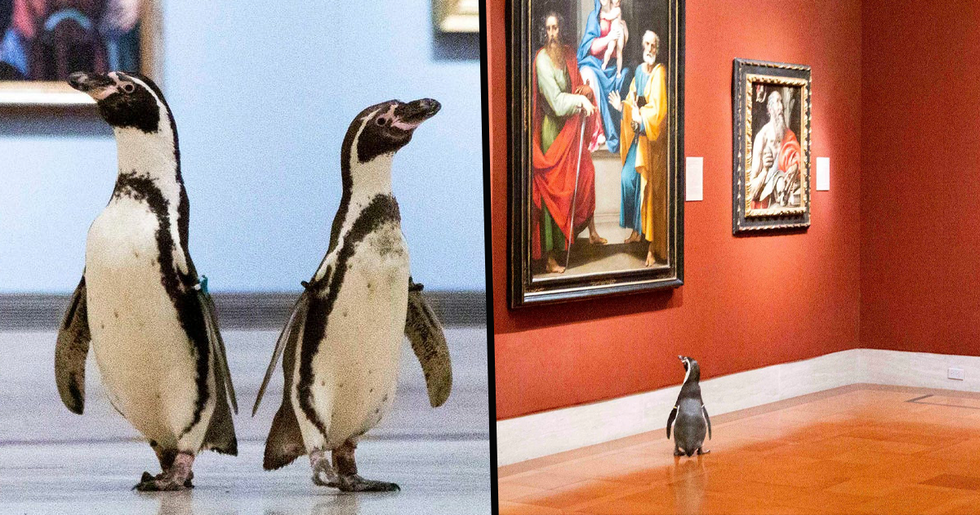 During this global pandemic, penguins have been thriving. From meeting whales in the aquarium to roaming the streets of Cape Town, South Africa. Now, they have been allowed to wander around a museum and they just couldn't take their eyes off the paintings.

And people all around the world have been expressing their concerns over these poor animals.

And it turns out that the animals themselves have also been having a pretty hard time...

And they are beginning to wonder what has happened to all of the curious faces that they used to see on a daily basis.

Zoos all around the world are finding changes in their animal's behavior...

Dinah is missing interacting with her fans and is looking forward to when guests are able to return. Meet Dina the… https://t.co/ncYzwecxj2
— Phoenix Zoo (@Phoenix Zoo)1588003340.0

Linda Hardwick, who is the communications director at Phoenix Zoo, said, "We have noticed that some of our more ‘social’ animals are not a fan of the stay at home and social distancing orders. Primates especially have noticed our guests are gone and go looking for them." "Our Tropical Flights Aviary is home to a very special, and social bird; Dinah the Bali myna, who is missing the attention of guests. Bird keepers are visiting her frequently to curb her loneliness."

Us humans being in lockdown is completely out of the ordinary for the animals in these zoos...

The rhinos and giraffes at New Zealand’s Orana Wildlife Park have still been turning up for their public appearances, despite nobody coming to see them.

And way across the pond in Ireland...

Leo Oosterweghel, director of Dublin Zoo – which pulls in around 1.2 million visitors every year – said the animals look at him "with more surprise now."

Fan photo of the week goes to portkeyphotography for this photo of the Bornean orangutans practising their social d… https://t.co/ymdGZoMI5Y
— Dublin Zoo (@Dublin Zoo)1587808800.0

"They come up and have a good look because they’re wondering what’s happened to everyone else. They are used to visitors," he told The Irish Times.

According to experts, animals in zoos rely strongly on their human visitors.

Paul Rose, a professor in animal behavior at the University of Exeter in the U.K, the zoos’ residents – such as primates and parrots – rely on our visits and engagement for "enrichment." "It is beneficial to the animal’s well-being and quality of life. If this stimulation is not there, then the animals are lacking the enrichment," he told BBC News.

The majority of zoos have regular keepers attending to the animals and keeping them company.

The keepers at Kansas City Zoo have taken things to a whole new level.

While most other animals are sadly just trying to make it by, penguins are thriving. From visits to aquariums to freely roaming areas in South Africa, penguins are living their best lives now that humans are locked away.

Recently, they were allowed to wander the rooms of a museum.

Penguins from the Kansas City Zoo paid a visit to the Nelson-Atkins Museum of Art, which is pretty close by, wandering the halls as they admired Baroque and Impressionist paintings.

And let's just say they were starstruck...

3 Humboldt penguins examined paintings and judged the all-time greats, including Caravaggio and Monet which surprised the owner, who loved their artistic choices.

It would make more sense if they were entranced by "Water Lillies."

Julián Zugazagoitia, the director told Insider it would be good for them saying "the reason we wanted to expose the penguins to the 'Water Lilies,' besides the fact that it's one of our favorite paintings, is that it's so calming and soothing," he said. "We thought maybe they would react to the soothing ness of that painting, but they seemed to wander around and not particularly stop on that one."

"I think they felt more comfortable there [near Baroque's work]," Zugazagoitia said. "They seemed to spend more time there and look more intently. The room is much warmer, the walls are red, and there's a lot of action going on in the paintings."

Nonetheless, it was a rare and beautiful sight.

"I don't know if the penguins were recognizing human figures and looking at that, as they like interacting with humans," he added. "Or maybe they just like the Old Masters more."

He also revealed some news that effected both the zoo and the museum.

"All of Kansas City, especially the arts and nonprofits, is a very close-knit and friendly group," Zugazagoitia said. "So we're all talking to each other to coordinate how to reopen."

Here's the full video of the penguins' visit:

Adorable, right? If you're in the mood for some more penguin-related news, then keep scrolling...