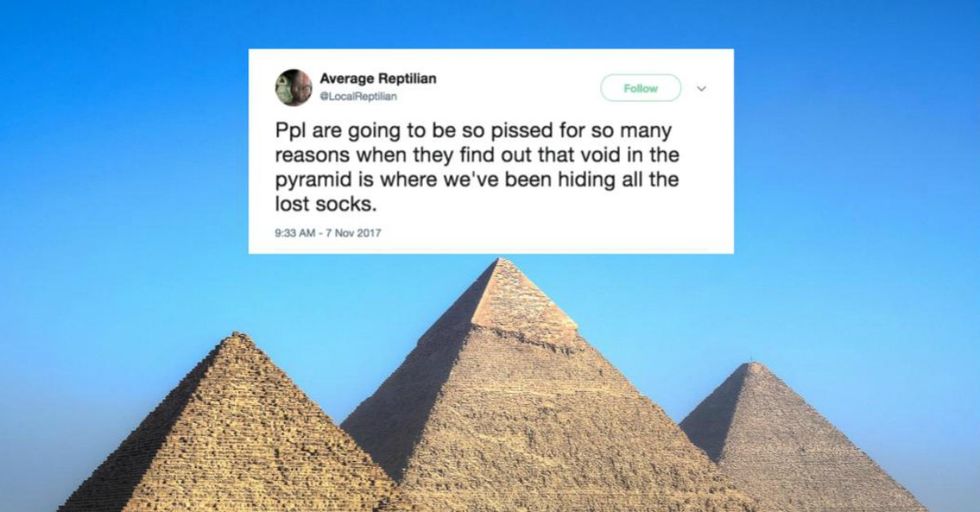 It's easy to feel jaded in the age of social media. Information is instant and copious, and the constant flood of details about politics, celebrities, and and even tragedies can make a person view the world in a mundane way. It's easy to forget that there's anything in this world that inspires wonder or imagination.

But, occasionally, something comes along that wakes us up and reminds us that the universe is still full of mysteries that need uncovering.

A recent discovery in Egypt is such a mystery. Researches found a sealed "void" inside one of the great pyramids, and what's inside is anyone's guess. One thing's for sure though: scientists are determined to find out the answers.

These days, information overload is a reality.

The irony of living at a time when almost anything we want to know is at our fingertips is that we take that access for granted. Smartphones take the guesswork out of most questions. And, sometimes, it seems like we're inundated with so much news, blocking some of it out is the only way to stay sane.

Usually, nothing surprises us anymore.

Social media feeds are nothing but a constant stream of tips, photos, and updates about less-than-pleasant things taking place around the world. It all adds up to sensory overload, which can tend leave event the most optimistic people feeling a little jaded. The world starts to look like a ticker-tape of natural disasters and talking heads hashing out the same old topics.

It's easy to buy into this view of the world because most of us are so busy.

As far as day jobs go, most people are hurriedly tapping on laptops or moving to keep pace with the needs of others. There's precious little time to wonder about the bigger picture, or daydream about what could be. It's a hamster wheel of needs, wants, and quickly trying to file away all the information coming at us. We know what we need to know, and so we just keep swimming.

But some people dream and discover for a living, and that's great news for the rest of us.

Thankfully, archaeology still exists. While many of us take what we know about the world for granted, archeologists are busy trying to unearth new and exciting discoveries no one has ever seen or investigated yet. It may not always be as riveting as an Indiana Jones movie, but uncovering the stuff that history books are written about is a pretty fascinating field.

Egypt is still a hotbed of archeological activity.

Looking at museums filled with mummies, burial treasures, and intricately carved sarcophagi, it would be easy to assume that scientists have already turned up everything there is to see when it comes to Egyptian history. That's not the case. Egypt is still filled with teams of researchers digging down into the underbelly of the desert to find new tidbits about dynasties long past.

One of those places is the Great Pyramid at Giza.

One of the Seven Wonders of the World to remain largely intact, the Great Pyramid of Giza clocks in at a whopping 481 feet tall, and is thought to be the oldest of the three pyramids that make up the Giza Pyramid Complex. An ancient burial ground, it's also known as the Pyramid of Khufu or Pyramid of Cheops. Scientists have long known that the famous structure contains three main chambers, and they've spent years familiarizing themselves with every accessible part.

Proving it's not a wasted effort, a new finding is pointing the spotlight at the famous landmark.

While it's common knowledge that the Great Pyramid has a king's chamber, a queen's chamber, and a "Grand Gallery," what archaeologists have just discovered is that there's a fourth, unseen chamber. And it's big. Those documenting the finding claim the "void" is roughly the size of an airplane hanger. Not an insignificant finding. Mehdi Tayoubi, president of the ScanPyramid project, told reporters that the group is investigating this new find. He says, "There have been many theories about the existence of secret chambers inside the pyramid, but none have predicted anything this big."

Archaeologists haven't actually seen the "void," but they know it's there.

Unfortunately, they haven't yet actually been able to glimpse the space with their own eyes. It's completely sealed off and currently inaccessible to outside investigators. How then, do they know that it's there? As is often the case, we can thank new technology.

"Mapping" with particles is the key.

The team investigating the finding is using "cosmic ray muon radiography," a new type of imaging that works a little like garden-variety X-rays. Muans are particles that can travel through stone, and by following the path of these particular particles, scientists can "map" where solid matter ends and voids of space begin. This gives archaeologists a fairly clear picture of the space within the pyramid, without being able to actually see it.

The specifics aren't exactly clear yet.

While archaeologists scanning the "Big Void," as it's called, have a general idea of its size and scope, precise details have yet to emerge. However, the space is estimated to be about 98 feet long. As for where it is, investigators are fairly sure it's located above the Grand Gallery, a space linked to Khufu's burial chamber.

Now everyone is left wondering about the million-dollar question.

What's the heck is inside the Big Void? Unfortunately, archaeologists won't know the answer for some time, although they have entertained the idea of sending a miniature robot in to take a look. Whatever lies in the unexplored space has been there since the pyramid was built about 4,500 years ago, so if there is anything inside, it promises to be one of the great discoveries of the modern age. We, along with everyone else, can't wait to see what that is.