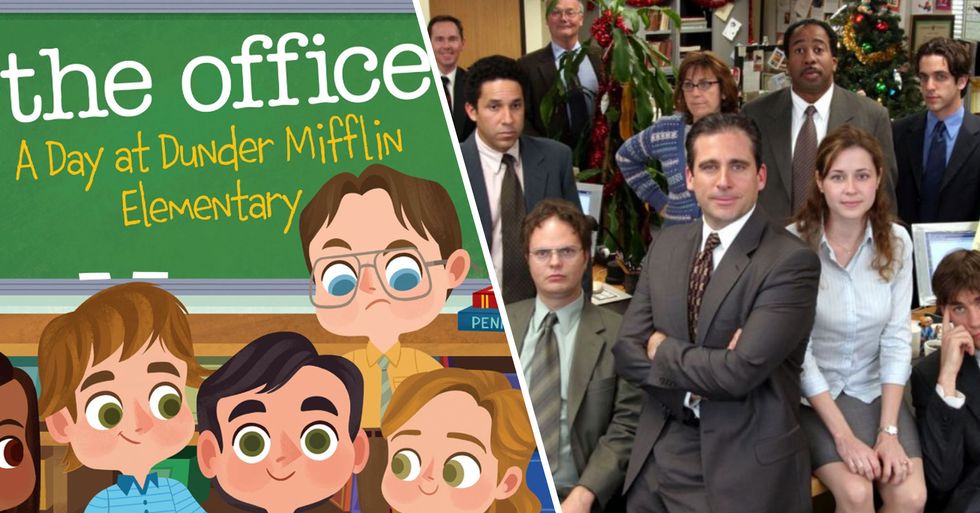 A New Children's Book Based on 'The Office' Has Been Announced

The Office is one of the most popular sitcoms ever... period.

But it's pretty obvious that it isn't exactly child-friendly and its adult humor is only suitable for people above the age of fifteen.

However, children will now be able to enjoy the innocent joys of The Office thanks to a new children's book that has just been announced.

Who doesn't love The Office?

Well, if you don't, your sense of humor needs seriously checking out!

It is one of the most popular sitcoms ever...

But believe it or not, The Office didn't start here in America.

Comedian (and all-round genius) Ricky Gervais created and co-wrote the BBC sitcom with Stephen Merchant and he went on to star in the series as the boss and main character of the show - David Brent.

Despite the show only running for fourteen episodes...

It is still to this day considered one of the funniest sitcoms in the U.K. and it is what launched Gervais' very successful career.

Greg Daniels, who is best known for writing Saturday Night Live and King of the Hill decided to create an American adaptation of the British sitcom.

The American version proved to be very successful...

Its "mockumentary" style is perhaps what made both adaptations so popular...

And so damn hilarious, of course!

Steve Carell received a lot of praise for his leading role as boss Michael Scott...

And he soon became the official face of The Office, which Ricky Gervais is fine with, by the way!

The sitcom has a global fan base...

But if there's one thing that The Office fans share, it's their age bracket.

And both the U.K and the U.S versions have been hailed for their dry, sarcastic, and adult senses of humor.

But news has just broken...

A children's adaptation will be coming very soon.

But a children's book especially dedicated to The Office has just been announced.

It is called "A Day at Dunder Mifflin Elementary"...

And we can only imagine it will be just as chaotic as the events at the Dunder Mifflin branch.

And it tells his story as he strives to live up to his "World’s Best Line Leader" title (with Dwight by his side as Assistant to the Line Leader, of course), and features all your favorite characters as young kids.

It's time for our kids to enjoy the genius of The Office...

The book’s official description reads, "Filled with fan-favorite characters and hilarious references to the acclaimed TV show, this storybook is an age-appropriate way for fans of The Office to share their love with the whole family, just in time for the series’ 15th anniversary!"

Written by Robb Pearlman and illustrated by Melanie Demmer...

The book is told to be packed with easter eggs that will make it a fun read for children and fans alike.

Fans are very happy with the book release...

And people have been gushing online over the kid's edition, and we have to say... this generation of children are going to have amazing senses of humor.

It'll be available to buy in October of this year...

It will retail for $17.99, but pre-orders are now available on Amazon for those particularly keen fans.
Buy Now

Keep scrolling for information on The Office reboot that's coming in 2021...