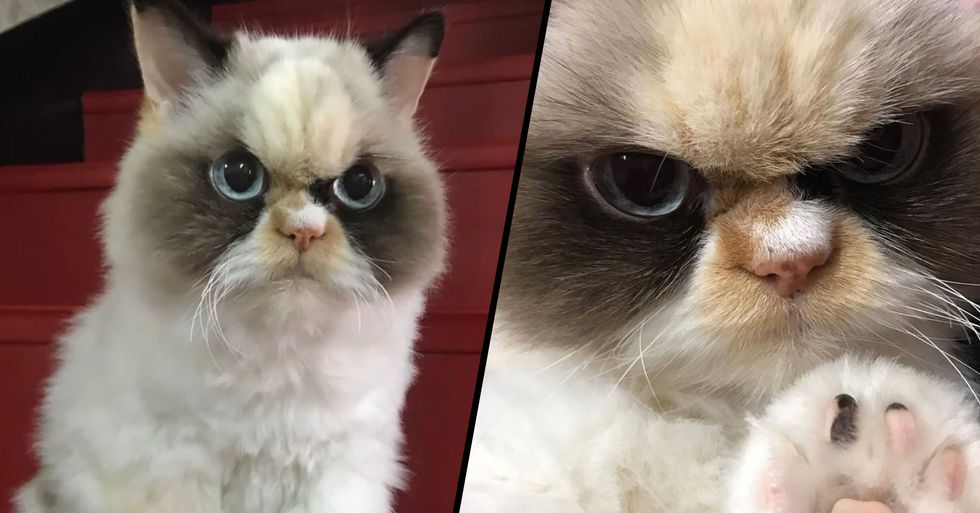 Grumpy Cat feels like one of those staples of the internet. For those unfamiliar with our beloved feline, you're in for a treat. Grumpy Cat was a cat that was just always... well, grumpy. She was a perfect outward reflection of how we all felt. Her memes and appearances were always just perfect.

In May 2019, the internet lost a true icon - as Grumpy Cat's parents announced that the beloved pet had passed away.

But for those missing a foul-faced feline in their lives, never fear. A new Grumpy Cat has been found - and their expression might just be even moodier.

She was a revolution. Her owners first posted this picture of her to Reddit back in 2012, and immediately, the internet was in love.

In no time, she was a bonafide celebrity.

She made appearances on Broadway. (She might even be more famous than some of those Cats actors).

She got her own wax statue at Madame Tussauds.

Some actual human celebrities don't even get a spot at Madame Tussauds. That's cultural impact...

She even had her own Lifetime Christmas movie.

This isn't even a joke cover. This is a real movie, that you can buy. Today. And it's low-key a masterpiece.

She made appearances on magazine covers.

What's not to love about this adorable little furball? That's exactly how my face would look if they asked me to be on the cover of Reader's Digest.

And rightfully so. She's the best meme the internet has ever had.

Even @WeRateDogs was in mourning.

And rightly so. They were like equal and opposite memes, but we're sure they loved each other.

"We are unimaginably heartbroken to announce the loss of our beloved Grumpy Cat."

So, pour one out for Grumpy Cat, and enjoy the last few memes she ever graced.

Standing ovation for becoming synonymous with the internet.

Grumpy Cat should have had her own vlog. We can all see that now.

This is how she would have wanted to go -- hating on everything.

She made everyone smile.

Because she hated life just as much as we all pretend not to.

Even Star Wars was sad.

Does Grumpy Cat exist in the Star Wars universe? Can we get a Grumpy Cat force ghost in Episode IX?

This man is a NYT best selling author.

In case you had any concerns with how far Grumpy Cat's reach truly was.

But those who were missing Grumpy Cat can breathe a sigh of relief.

And she's taking the internet by storm.

Owner Clare told Bored Panda, "I met her at an old pet shop. Her ex-owner abandoned her for some unknown reason."

"She was 10 months old at that time, so me and my younger brother took her to our house and she became my first cat."

And in spite of her furious face, she's a real cutie. "She massages me using her paws to wake me up every single day."

Even though she looks a little odd, she's just like any other cat.

"After the meal, she washes herself and jumps onto one of her favorite places near the windows to watch the birds."

"Sometimes she even draws the curtains all by herself just to sit down and get a better look."

"I find her very gentle. I even dressed her like a princess once, but my friends saw her and told me she looked more like a queen."

Thank goodness the Grumpy Cat shaped hole in our heart has been filled.

Want more of the internet's best cats? Scroll on for some cute 'n' curly guys.