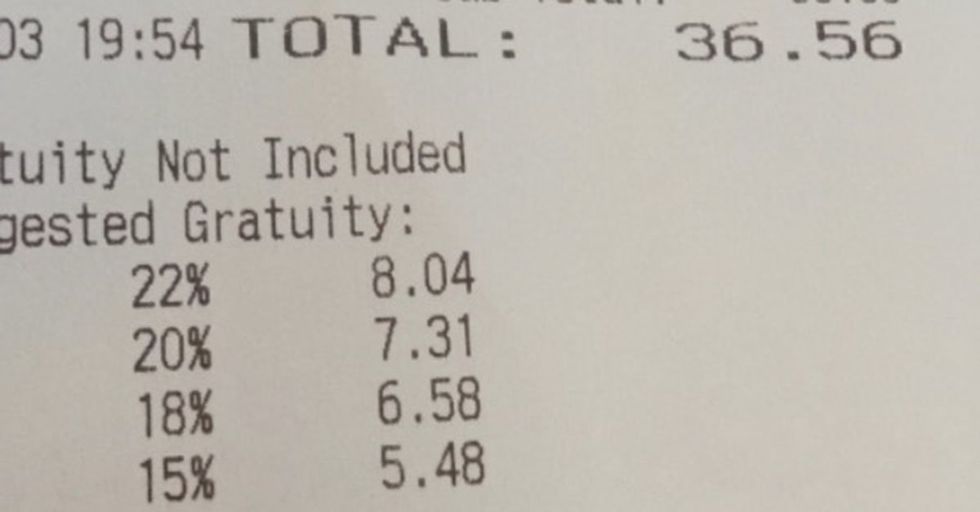 Splitting the restaurant bill can be a total pain, as we all know. Tipping can be a tricky part of that, but the "suggested gratuity" you see on your check may be tricking you in a big way.

You've no doubt seen the "suggested gratuity" sitting at the bottom of your check.

In theory, it's a handy guide to know how much to tip if you're bad at math or just don't feel like calculating it in your head.

Odds are, you either use it religously when dining out, or you don't notice it at all.

But those who DO depend on it are no doubt grateful for its presence an the ease with which they can now calculate the gratuity without having to do math of any kind.

A new lawsuit that's gone VERY public by a huge chain suggests that blindly following the guide at the bottom of the check might be steering you in the wrong direction.

So even if you find yourself to be a very math-averse person, you might want to at least crunch the numbers on the suggestions, because something nefarious might be going on, causing you to overpay.

However, if you've been using the numbers provided without a second thought, you might be in for a surprise.

You should probably look more closely and see where those numbers are coming from.

Before we go into the details here, which are VERY TROUBLING, remember that Cheesecake Factory is a big, reputable chain.

If they're doing what you're about to read about, it's a safe bet that less established places are as well.

It turns out that some restaurants, including The Cheesecake Factory, uses some questionable math to get these things done.

Now, there's a lawsuit taking place over the practice, and The Cheesecake Factory might not be the only restaurant chain in trouble.

The big issue at hand is that the restaurant doesn't change its table when the bill is split.

Essentially, if you split a $100 tab, the two receipts for each $50 share will show the tip amount on the original total, not the split amount. Most people notice this and are able to work through the confusion to pay the "correct" amount in tip. But some people have realized that they've been paying way more than their share based on these tables. That's the crux of the lawsuit facing the chain.

Another complaint against the chain, but not mentioned in the lawsuit, is that The Cheesecake Factory suggests the tip on a larger base amount.

It's based on the total with tax included. Most restaurants calculate the amount using the pre-tax subtotal.

Some people are blaming the diners for not knowing "basic math" and putting WAY too much stock into those tip tables.

One point being made is that The Cheesecake Factory, which controls the way the "suggested gratuity," isn't making money off this. Its servers are.

But, it's a form of compensation nonetheless, and even though Cheesecake Factory doesn't see the money directly, some believe they're responsible for making sure their guidance and suggestions are on the up-and-up.

What do YOU think? Are people relying on this too much? Even so, is The Cheesecake Factory at fault for failing to split the tip with the tab?

Tipping is a controversial and contested issue in the best of times. This is likely to get the blood flowing by people in food service and diners alike. We'll see how the case goes!

Some restaurants are working hard to keep the whole tipping mess out of customers' hands.

But as you can see, even if it's controversial, some restaurants that adopt a "no-tipping" policy tend to go right back to the usual operation when customers get confused.

Is there ANYTHING about tipping we can agree one?

It certainly doesn't seem so. We definitely can't agree on amounts, so any widespread policy might alienate customers.

That said, this video suggests several REALLY good reasons why tipping is an outdated method of compensation.

You might agree or you might not, but the points are well-argued. Many think it's just wrong to put servers' wages in the hands of customers rather than employers.

Until then, its seems like servers will be acting like Blanche in A Streetcar Named Desire, always relying on the kindness of strangers.

It's not a perfect system, but it's the one we have, and it doesn't appear that it's going anywhere anytime soon. Even if many feel it should go straight in the trash.