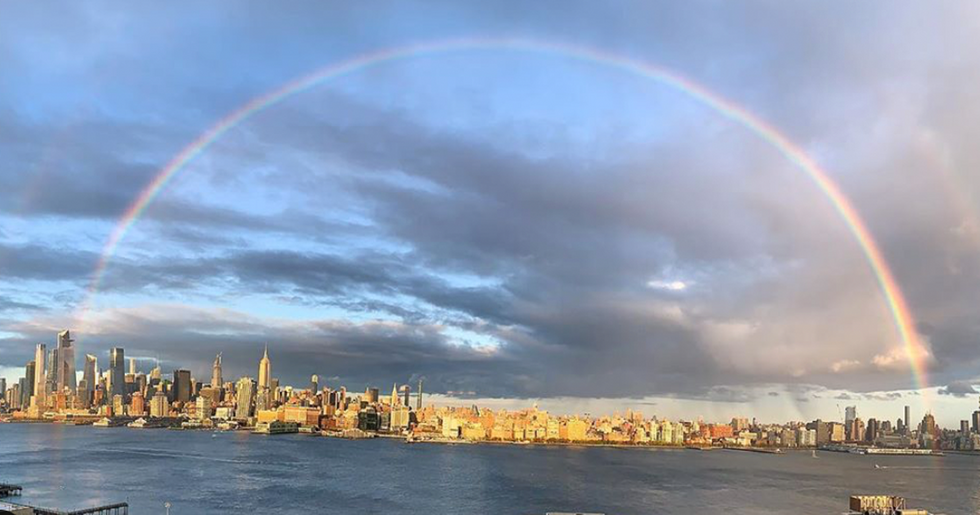 During the new tradition of clapping for the essential workers of New York City, a beautiful rainbow appeared on Monday evening that touched the hearts of the entire city.

Keep scrolling to check out the beautiful pictures...

New York City is the worst affected part of our country right now...

And a beautiful tribute was made recently for the essential workers of NYC after the disastrous Empire State Building's flashing red siren tribute made last month. But firstly...

This also includes 26,112 known deaths - the highest number of deaths in one country.

According to a New York doctor, the number of patients on ventilators "more than doubled" in the last month.

However, at last week's White House briefing, Dr. Deborah Birx said that Chicago and Detroit are also demonstrating a "concerning" spread of the virus.

Birx also said, “There is no reality on the ground that 60-70% of Americans will get infected in the next 8-12 weeks."

This is certainly a worrying time for all us in America and across the globe.

It's clear that officials saw the mistake with their huge flashing siren...

And instead, the entire city has been taking part in a huge round of applause every evening at 7 pm to pay tribute to their healthcare workers.

And earlier this week, something remarkable happened during the applause.

After the downpour of rain and blustery winds died down on Monday night, a double rainbow arched over New York City's skyline, offering a brief moment of peace.

The timing was incredible...

And many of the 8.4 million residents of NYC managed to snap some beautiful pictures of the rainbow.

Many felt this was Mother Nature's way of thanking our heroes.

A rainbow is a symbol of hope...

And that is exactly what the entire world needs right now - especially those working on the front line.

New Yorkers are known for being proud...

And it's safe to say that they are beyond feeling proud of their incredible city right now.

Streets that were once bustling with life have been left empty...

But the rainbow highlighted the peaceful atmosphere that has been left instead.

This kind of hope is exactly what our country needs right now.

Make sure to keep scrolling for the story of the healthcare worker who was applauded by her entire street as she made her way to work...