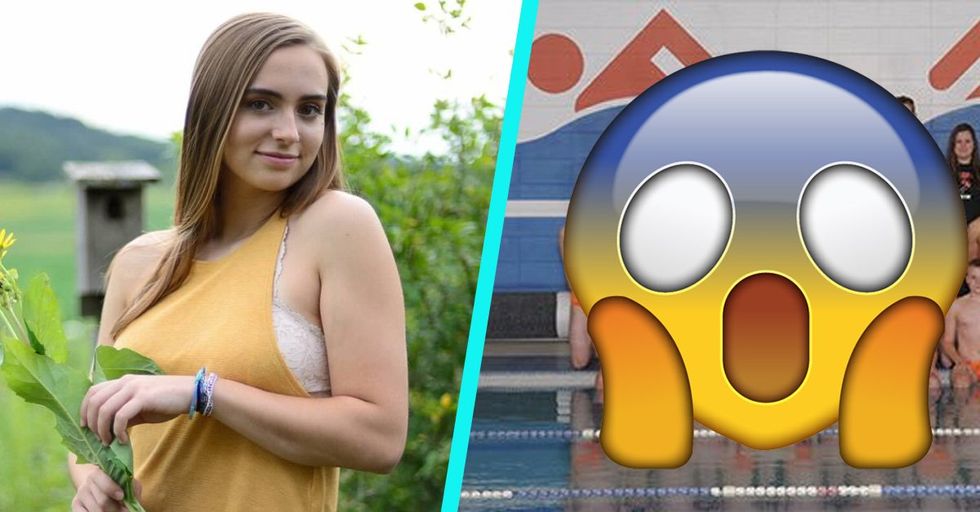 Schools around the United States really need to get it together when it comes to dress codes.

Girls are often subjected to sexist double standards and public humiliation for the sake of archaic rules that spread harmful concepts like the sexualization of young girls' bodies.

Now, a student who's been a victim of this ridiculous gender-based hypocrisy is standing up to her school — and she went viral, of course.

On September 26, 2017, high school senior Eleanor took to Twitter after her senior portrait was deemed "too inappropriate" by her school.

"Here's my senior picture," she wrote in the tweet that's been liked over 170,000 times, "because you can see my part of my brallette [sic], it was 'too inappropriate.' Yet, here's the boys swim team picture."

She posted the senior portrait in question.

Eleanor is posing in a field with some flowers, but because a lacy swath of bralette is visible — mind you, a lacy swath that's covering her body — it was labeled "inappropriate."

Eleanor clarified that she has nothing against the guys' swim team.

my tweet wasnt to call out the boys its abt the school saying my pic wasnt ok but they show way more skin and get their pic seen a lot more
— eleanor (@eleanor)1506552295.0

It's all the sexist double standard. Young girls' bodies should not be sexualized. When spaghetti straps or large busts or visible bras are considered "inappropriate" or "distractions," but men's almost naked bodies are fine, it teaches boys and men that women's bodies exist for them.

Eleanor, bolstered by discussions with teachers and friends, decided to take her complaint off of Twitter and straight to the principal of her school.

@madeinHAWAII_ talked to teachers and friends, and i'm gunna go talk to the principle with a fully prepared argument 😂😂
— eleanor (@eleanor)1506486128.0

Way to stand up for what's right, Eleanor! Of course, the Internet tweeted its support for Eleanor's cause...

Eleanor was covered up. The men's swim team was not. Eleanor was only told her photo was inappropriate because of sexism. End of story.

This person had a slightly more creative solution for Eleanor.

Basically the whole Internet — including this GIF of Drake — stood up for Eleanor and her cause.

Go teach those school administrators a lesson, Eleanor! Then have the best time leaving that school forever and going on to bigger and better and less hypocritical things.