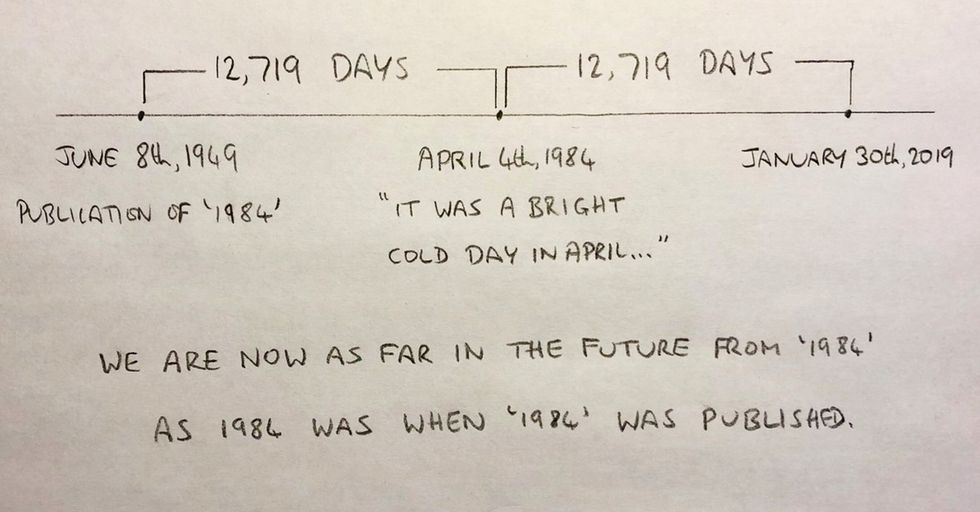 Life moves fast, doesn't it? It's funny, some days it feels like it's crawling by, and then one day you wake up and it's been ten years since you graduated college. It's been a year since you spoke to that one friend who you thought you'd be close to forever. Your baby is now a toddler, your toddler now a young adult.

There are a lot of uncertainties in the world, but one thing remains the same: time continues. We (unfortunately) can't do anything to speed up the clock or slow it down. And we really want to do both of those things sometimes, don't we? We're told by wise folks to live in the present, but it's hard! Living in the present moment is not something that's easy to do, though we know that it's how we should live. We aren't promised tomorrow, so why fret about it?

All of this heavy stuff to say that, occasionally, we're struck by how quickly time moves, particularly when it comes to being reminded by cultural landmarks.

Have you ever heard of the term "Mortality Maths"?

It sounds a little dark, doesn't it? Well, it's actually a pretty interesting concept.

"That pinning of memories to significant cultural events and then fretting unduly about how old it makes us feel, is a thing that regularly sweeps social media," writes Rhodri Marsden for Independent.

Basically, it's that feeling of dread? anxiety? disbelief? that comes with the realization that life is speeding by.

And the reason this dread/anxiety/disbelief comes about is that of a cultural event. Like how in Madonna's song "Vogue," every celebrity she names is now dead.

This has definitely happened to me before.

Like when I realized that Julia Roberts' character in My Best Friend's Wedding is supposed to be 27-years-old. She always seemed way older, because I grew up with this movie. I'm now older than that character. When did that happen?!

It feels crazy when you think about it.

Can time please slow down a bit? Also, the fact that Julia Roberts is playing a well-known restaurant critic who is supposed to be only 27 is bonkers. But that's another story.

Familiar with George Orwell's dystopian novel, 1984? It was originally published in 1949.

Most people have become victims of an omnipresent government, constant war and propaganda. Basically, it's a pretty terrible place to live.

In the book, there is a force called the "Thought Police."

The persecute any and all individual thinking. Imagine living in a world where you're punished for the thoughts that you have in your head...

I can't think of a worse world to live in. The leader of the "Party" in the book is named Big Brother.

In the book, Big Brother may not even exist. The novel centers around the protagonist, Winston Smith.

Winston is a member of the evil "Party" and on the surface, appears to be a loyal member.

But it's revealed that Winston hates being part of the Party. He dreams of rebelling against Big Brother.

Winston begins a forbidden relationship with his coworker, Julia, in an act of rebellion.

It's all very sad and depressing and scary. Honestly, the perfect winter read!

A lot of us had to read it in high school.

And if you were anything like me, the book freaked you out! It's very disturbing.

A recent realization regarding the famous novel was discovered...

You can use 1984 for a piece of the Mortality Maths puzzle. Are you ready? We are now living in a world that is as far in the future from 1984 as 1984 was when the book was published.

Does your brain hurt the way mine does?

It's okay if you need to take a moment to digest that. Mortality Maths puzzles can be confounding and disorienting.

A Twitter user posted a perfect explanation for his Mortality Maths discovery.

Parikian also pointed out that when he realized this, it was also a "bright cold day."

Parikian also joked that other than that, there are no parallels between the book and the world we live in today.

Other than that, there are literally no parallels to be found between Orwell’s book and the world we live in today.
— Lev Parikian (@Lev Parikian)1548840390.0

Not everyone understood his joke, with a Twitter user accusing him of living in a cave. He quickly replied that he was clearly joking – there are in fact, lots of similarities, unfortunately.

@LevParikian @MaartenDevant Strange, I could have sworn the clock struck 13 hardly an hour ago and the lunchtime ne… https://t.co/9rFHm5YaZJ
— Mark Almond (@Mark Almond)1548858311.0

Mark has definitely read 1984 before.

There are quite a few Madonna Mortality Maths, aren't there? It makes sense, given that she is a huge pop culture icon.

Sometimes it's just nice to be seen for your penmanship, you know? Parikian commented that this was his favorite response thus far on his Orwellian thread.

The Mortality Maths keep on coming.

@LevParikian Another one, Nirvana's release of Smells Like Teen Spirit was equal distant from last year and the sta… https://t.co/JYivDumbOH
— Darrin Wicken (@Darrin Wicken)1548866914.0

The crazy thing about Mortality Maths is that you don't really get it when you're living it – and then all of a sudden, in the future, it hits you. It's that wave of nostalgia mixed with disbelief that time can really move that quickly.

Some people believed that Parikian's Mortality Maths discovery had a deeper meaning.

Okay, but what do the numbers mean?! Can Salena explain them to us? I want to know.

One Twitter user remarked that Hollywood missed the perfect opportunity to have another 1984 remake premiere.

What a missed opportunity! How could you drop the ball like this, Hollywood? Although, it kind of feels like we're just living in our own warped version of 1984...we don't need a movie. We just have to turn on the news.

Here's an interesting one...

@LevParikian While teaching The Handmaid’s Tale a few years ago, I realised it was as far in the past for my studen… https://t.co/Jm4hKw0VUy
— Klaudio Z. Podreka (@Klaudio Z. Podreka)1548860703.0

Once you understand Mortality Maths, you begin to see them everywhere. It's hard to not start thinking about them all of the time.

Imagine where we would be without cellphones? Remember the days of the landlines?

Parikian confessed he'd been ready with this tweet for months.

Almost an entire year! The anticipation! I wouldn't have been able to wait. I would've posted too early.

Mortality Maths are fun to discover...

But they're also wildly overwhelming! If you're an anxious little ball like me, then thinking about how quickly time passes can feel a little depressing.

But it's really addicting to look them up...

It's also a very fun way to think about cultural events and their significance in our world. Can you think of any Mortality Maths? Let us know!