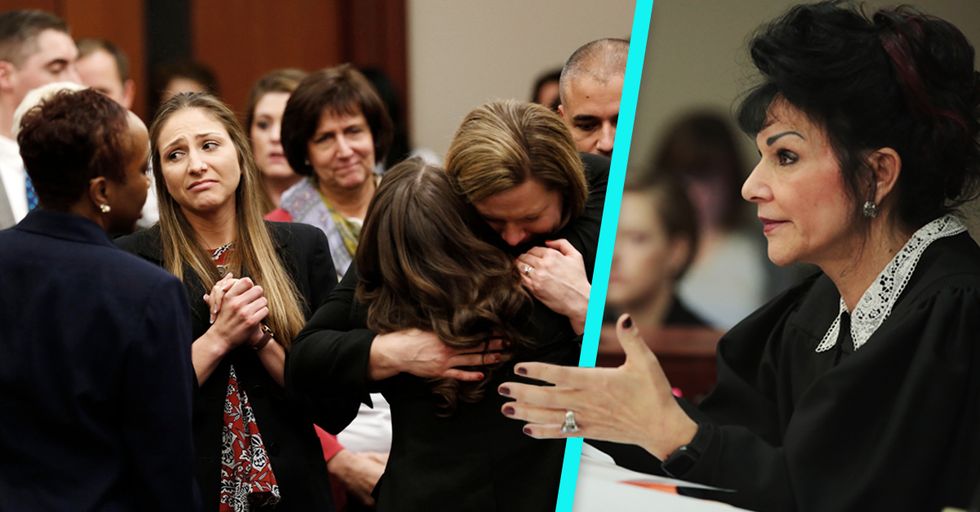 On Wednesday, January 24, 2018, former Olympic doctor and notorious pedophile, Larry Nassar, was sentenced to 40 to 175 years for molesting over 160 girls and women. The news came as a relief to the gymnastics community, which Nassar had preyed upon upon for decades, using his reputation as an esteemed and beloved figure to cover his tracks.

Nassar was fond of digitally penetrating girls under the auspices of "treatment," specifically, "intravaginal adjustments," a legitimate medical procedure which, in his hands, became a tool for evil.
When girls complained, he used an army of unsuspecting friends and well-wishers (the vast majority of whom had no idea of what he was doing) to shut them down. He even used the girl's own families against them, since many could not believe such a "nice" man had done such things.
The grand evil of Larry Nassar was that he made everyone around him unwittingly complicit. Judge Rosemarie Aquilina acknowledged this as she presided over Nassar's sentencing. ''I just signed your death warrant,'' the Judge said.
She further added, ''It is my honor and privilege to sentence you. You do not deserve to walk outside a prison ever again. You have done nothing to control those urges and anywhere you walk, destruction will occur to those most vulnerable,''
Aquilina noted that Nassar's actions were ''precise, calculated, manipulative, devious, despicable," and scoffed when, earlier in the month, Nassar complained via a six-page single spaced letter that it was too hard to listen to his victim's testimonies.
"Now this is entertaining to me," Judge Aquilina said as she read the letter in court, which included such maudlin commentary as – "Aquilina said if I pass out she'll have the EMTs revive me and prop me up in the witness box.'" To this, the Judge replied. "I suspect you have watched too much television. It's delusional. You need to talk about these issues with a therapist and that's not me." .
At every opportunity, Aquilina has defended Nassar's victims and provided solace and a comforting, but stern figure in the bench. She has helped victims stare down a predator who, as a reminder, was first caught not because of the series of complaints lodged against him, but when 37,000 images of child porn were found on his computer, images for which he pled guilty and is already serving a 60 year sentence. Wouldn't you know some people took offense to her? And by some people, we mean men.

Judges even commented. Ingham County Circuit Judge William Collette, for instance, referred to Nassar’s sentencing as "the most violative" sentencing he can remember, further asking why Aquilina would allow women who were not part of the criminal proceedings to face Nassar in court.

"There has to be some semblance of fairness, no matter how much you hate the person," he said.

While that's fascinating, how about all the rape cases where the (male) judge opines that the freshly-convicted rapist is a nice young man that doesn't need his life ruined? What about the ones where the judge asks the 19-year-old woman why she couldn't keep her legs closed?
Twitter user @DouxDux addressed the double-standard in a now-protected Twitter thread during which she lambasted the Nassar apologists:

I see a lot of men commenting that they don't think the judge in the Nasser trial should've shown how odious and unrepentant she finds Nasser. Gentlemen, go sit in a criminal courtroom for a day and then tell me if you find the tone of her comments out of step. They're not.

[Aquilina] didn't do the following things judges do routinely: - comment about Nasser's culture and family being to blame for his crime; - call Nasser a thug or an animal Both of those are common, too.

I have never in my life seen a white man say that a white male judge was too tough on a Defendant. Never.

When judges do everything but curse out Black defendants from the bench, hold them in contempt for no reason, call undoc immigrants animals, call rape victims liars and frauds who waste taxpayer money? Then it's crickets. But let a female judge channel survivor anger. Whew.

She wasn't done there, bless her soul:

I've seen judges call abused women whose children were also abused "monsters" who "allowed" men to abuse their kids (man knocked the woman out and then beat the kid too. But it's her fault!) Let a woman judge tell a predator he's not getting it, when he is STILL, even though he PLED GUILTY, making excuses for his behavior and trying to claim the Attorney General railroaded him. Please.

She also had a word for people who were trying to twist things.

That attempt to corrupt his guilty plea and to claim he was unfairly manipulated and forced into pleading guilty? That's an attempt to undermine the legitimacy of the justice of that judge's court. And he called the judge stupid for not recognizing it or corrupt for going along. This is a man who moved her Court to stop his victims from reading out what he did to them because HE shouldn't have to SUFFER hearing it. The judge was limited, and kind, when she said, "I've signed your death warrant." The man is an unrepentant predator with no respect.

Many judges would've made comments that men are calling "impartial" today because she made them.

She wrapped up her argument by reminding people of the facts:

That judge was not required to be impartial. HE PLED GUILTY. It's a sentencing hearing. She gets to CHOOSE HIS SENTENCE based on her assessment of how big a predator he is.

I really saw that. That the judge should not have talked to him that way because it could create an opportunity to overturn his guilt claiming judicial impropriety. Really? He pled guilty. Try again.

You can read the rest of the thread here.